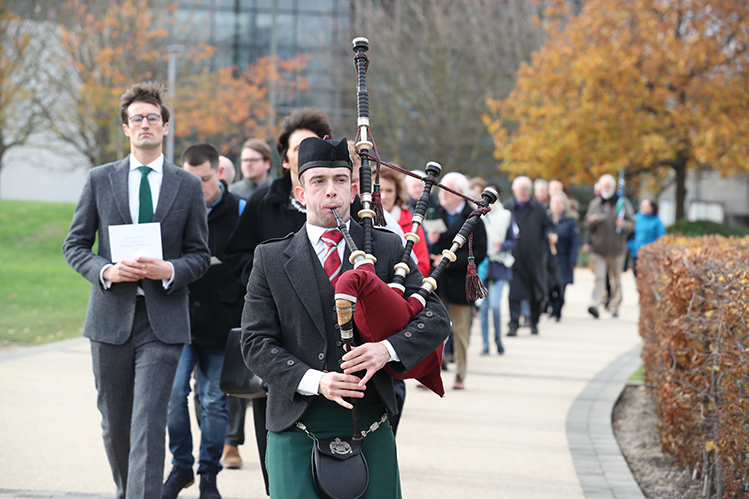 At 11 on the Friday before the Centenary of the Armistice for the First World War, relatives, staff and students, gathered at Memorial Hall, Richview, beside the plaque commemorating those from the former masonic school who went to World War One.  Then, led by third year Music & English student and piper from St Laurence O’Toole pipe band, James Stone, the group walked the length of the campus, each person carrying a light and the name of the UCD students, staff and graduates who lost their lives across the battlefields of Europe between 1914 and 1918.

The walk finished in the Rose Garden at Belfield House where the plaque commemorating Tom Kettle, who was Professor of National Economics at UCD, member of the Irish Parliamentary Party and poet.  Kettle was killed in action with 'B' Company of the 9th Battalion of the Royal Dublin Fusiliers in an attack on German lines on 9 September 1916, near the village of Ginchy during the Somme Offensive in France. 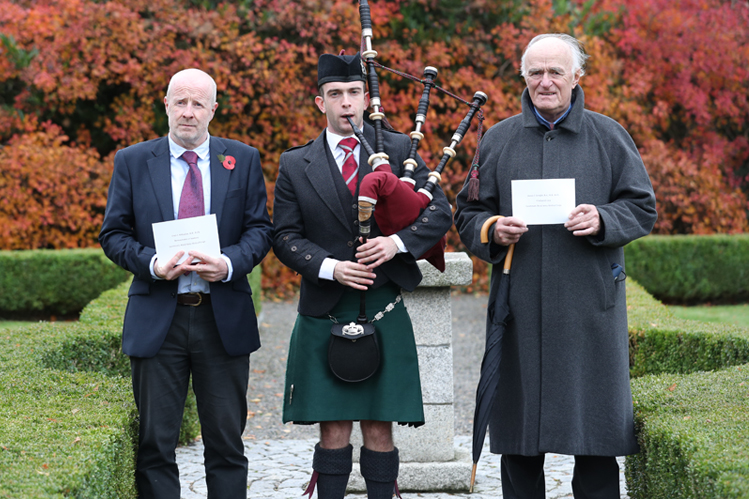 On the outbreak of the war, Kettle was in Belgium, acting under the orders of Irish party leader John Redmond procuring arms for the Irish Volunteers. Kettle remained in Belgium after the successful conclusion of his gun-running mission and acted as war correspondent for the Daily News. Upon his return to Ireland, Kettle signed up to join the British Army initially being consigned to recruitment duties in Ireland.

And meanwhile, Professor of English, Thomas MacDonagh was to become a signatory to the Proclamation of Independence and be executed for his role in the Easter Rising 1916, while Professor of Early Irish History, Eoin MacNeill, as chief of staff of the Irish Volunteers went against the planned rising; demonstrating the complexity of Irish politics and Irish relations with Britain.

The walk from Richview to the Rose Garden was a quiet and moving affair.  Autumn leaves swirled ahead of an expected squall and the weather held off long enough for speeches by Dr Conor Mulvagh, School of History, and Professor Orla Feely, VP for Research and head of the Decade of Centenaries Committee.

Among those who attended was Michael Doran, retired UCD vet lecturer, whose uncles, Thomas and James Enright – both medical graduates of UCD from 1914, joined the Royal Army Medical Corps.  James came home and lived a long and full life, but his brother Thomas, was killed on 19 March 1918 in Salonika in Greece.

The dataset compiled by Conor Mulvagh documenting the involvement of UCD students and staff in the War has been registered with UCD Digital Library: https://doi.org/10.7925/drs1.ucdlib_256142.

A dynamic map has been created from these data, identifying the locations of memorials or of burials of those lost in the War, using a geospatial visualisation application developed by UCD Library. It can be viewed here: https://n2t.net/ark:/87925/h1vx0dkc.

And an exhibition of material drawn from UCD’s three major heritage repositories—using documentary, photographic and recorded information -   “… and now the shells fall thick and fast” is now online: https://artsandculture.google.com/exhibit/vAKiRLFi1XzxIQ