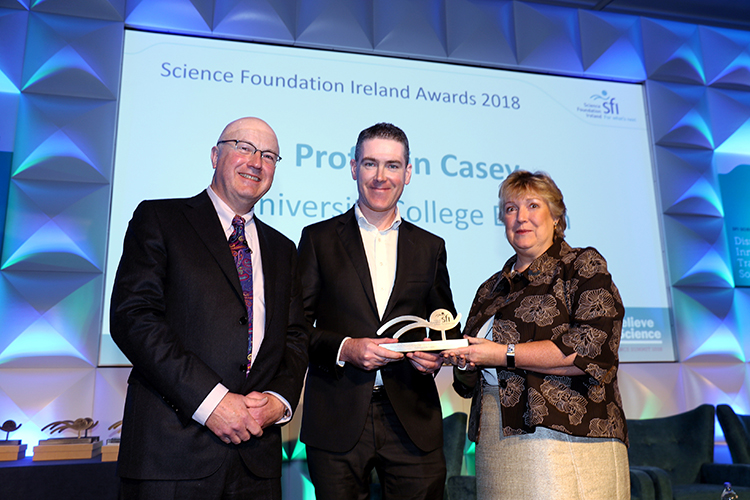 A UCD scientist at the forefront of wastewater treatment has received the Science Foundation Ireland (SFI) Entrepreneur of the Year 2018 award.

Professor Eoin Casey, Head at the UCD School of Chemical and Bioprocess Engineering and principal investigator at the BEACON SFI Research Centre, received the prize at this year’s SFI Science Summit.

A leading researcher in water treatment processes, the UCD researcher has pioneered a new technique for treating wastewater that is nearly 75% more energy efficient than current methods.

On receiving the award, Professor Casey said it was encouraging to be recognised for the work he and his team had undertaking.

“I would like to acknowledge the excellent and innovative work by the researchers in my group over the years and this Award helps showcase that curiosity-driven research can, in the long term, have a tangible impact on society,” he added.

Developed more a than a century ago, this process uses air to encouraged the growth of a biological 'soup' which digests organic content and pollutants in the sewage.

The process is considered highly inefficient and requires as much as 2-3% of a nation’s electricity demands.

Following patenting of the MABR technology, with the support of the UCD technology transfer team at NovaUCD, Professor Casey co-founded OxyMem, as a UCD spin-out company to commercialise the technology, along with Dr Eoin Syron and Wayne Byrne.

Following the success of these field trials the OxyMem technology has now been deployed, at commercial scale, in 30 major water treatment projects in 14 countries around the world.

Professor Orla Feely, UCD Vice-President for Research, Innovation and Impact said: “As a member of the OxyMem leadership team Professor Casey has helped the company create jobs, especially in the Athlone area to boost local employment, to grow and to secure clients around the world.

“The company which has secured several million euro in investment has already earned worldwide recognition as it has twice been included in Cleantech Group’s list of the 100 most innovative firms in the cleantech sector globally.”

Speaking at the 2018 SFI Science Summit, Minister for Business, Enterprise and Innovation Heather Humphreys paid tribute to the outstanding work of the awardees.

“The recipients are among Ireland’s top researchers and the awards recognise the contribution they are making in a number of areas including industry collaborations, entrepreneurship, communication and public engagement.

“I would like to congratulate each awardee on their tremendous achievements, their discoveries will bring economic growth and societal development in Ireland.”