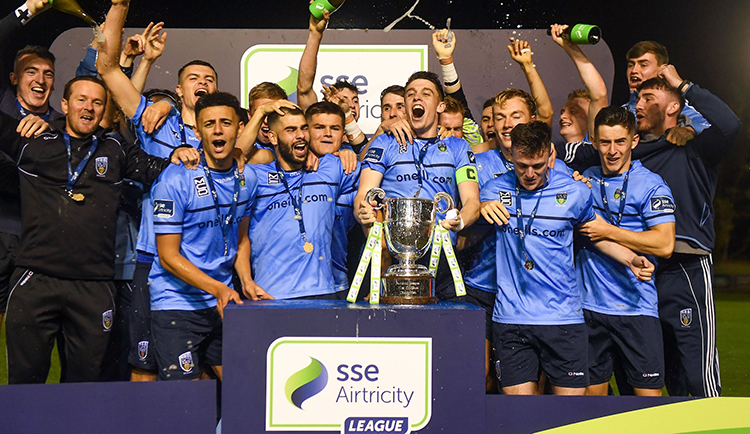 Clinching the title in a hotly contest 1-1 draw against league rivals Finn Harps on Friday, 14 September, the top of the table finish means the club will be playing Premier Division football in 2019.

The Students came into the game needing just a point to seal the title while Harps, the only side who could catch them at the top, needed a win.

And while the visitors to Belfield enjoy the majority of play, chances to steal away the title were few and far between.

It wasn’t until deep into the second half of the game when the first of the match’s two goals were scored.

The closest UCD got in the opening forty-five minutes was a shot from skipper Gary O'Neill.

Harps’ Keith Cowan got on the end of a Gareth Harkin corner to give the visitors the lead.

But the celebrations had barely stopped when The Students drew level.

Conor Davis struck eight minutes from time to seal the Premier Division title from the club, planting the ball in the bottom left corner.

This was the fifth goal in three games for the former Reading man.

WHAT A SEASON ITS BEEN! FIRST DIVISION CHAMPIONS! pic.twitter.com/x4GIIM0DwI

UCD AFC manager Collie O’Neill paid tribute to the squad after the win, saying club was "like a family."

"In twenty years time, this group will probably be meeting up together, having a drink. They’re buddies, they look after each other, and mind each other on and off the field. That’s why we’ve had success this year," he said.

With the First Division title win, UCD will return to the Premier Division for the first time since their relegation in 2014.