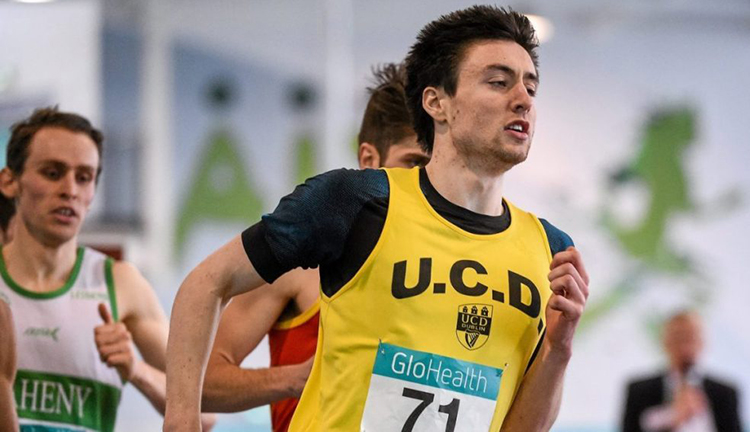 Fresh from winning titles at the National Indoor championships, Mark English and Ciara Mageean are bound for the European Indoor Athletics Championships.

The University College Dublin athletics are among an Irish team of 16 athletes selected to compete in Glasgow in March.

Claiming his sixth National Senior Indoor title at the Indoor Championships over the weekend, Mark won a European indoor silver medallist in Prague in 2015.

A student at the UCD School of Medicine, the Donegal man ran a time of 1:51.77 to take the honours in the 800 metres final in Abbottstown, Dublin.

“Medals aren’t the be-all and end-all for me now,” he said after the win.

“Things in life take over, maybe gives you some fresh perspective, but I never lost the love of running.”

Mark will be joined in Glasgow by fellow UCD Ad Astra Academy Elite Sports Scholar Ciara Mageean, who also stepped up to the winner’s podium at the National Indoor Championships.

Ten years on from winning her first national indoor, the 26-year-old produced a solid display to win the women’s 3,000m in 9:02.57 on the first day of the games.

The County Down runner is targeting the 1,500m in Glasgow.

A former student of the UCD School of Public Health, Physiotherapy and Sports Science, she is one of only three Irish female athletes to have won a European Championship medal.

The European Indoor Athletics Championships will take place from March 1st to 3rd.