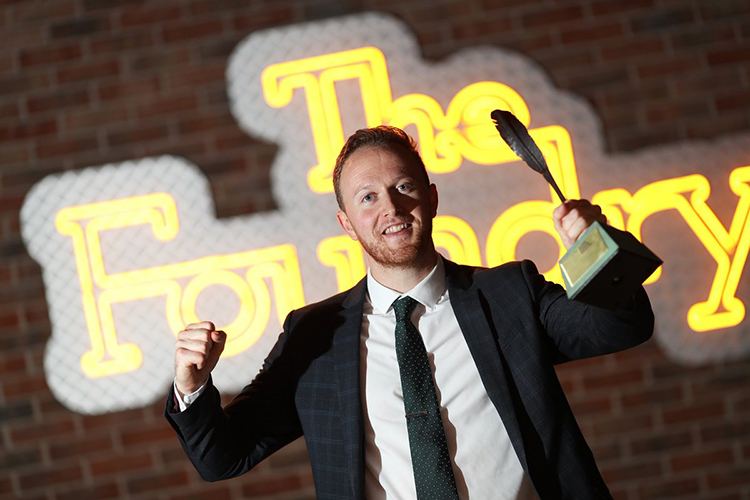 Representing the Dún Laoghaire-Rathdown Local Enterprise Office at the national final, Dr O’Reilly, from the UCD School of Public Health, Physiotherapy and Sports Science, created a wearable sensor that allows athletes to optimise their exercise routines to increase performance.

Output Sports, headquartered at NovaUCD, is capable of testing an athlete’s performance profile, such as strength, power, balance, speed and mobility, and tracks their exercise programmes.

This is done using off the shelf wearable sensors and applying sophisticated signal processing and machine learning applications to the sensor data.

Output Sports was founded by Dr Martin O'Reilly, Dr Darragh Whelan, Julian Eberle and Professor Brian Caulfield, based on research they carried out at the Science Foundation Ireland funded Insight Centre for Data Analytics at UCD.

The company’s technology has been co-developed with over 40 sports partners across Ireland, Europe and the USA, and among the athletes currently working with the firm are Leinster rugby player Adam Byrne and Kilkenny hurler Cillian Buckley.

Speaking of the award Dr O’Reilly said it was "testament to the hard work and dedication of my fellow co-founders, Darragh, Julian and Brian, as we work together to translate our research outputs into what we plan to be a successful company with global reach.”

“Irish entrepreneurs are among the very best in the world… [and] this year’s winners and wider group of finalists are the cream of the crop," said Minister for Business, Enterprise and Innovation, Heather Humphreys, TD, presenting the IBYE Awards.

Tom Flanagan, Director of Enterprise and Commercialisation, UCD said: “The founders of eight early-stage start-ups from across Ireland pitched at the final and the fact that the founder of a UCD spin-out won this award is an indication of the quality and investor potential of the start-ups emerging from UCD.”

“The €6.5 million project to develop NovaUCD’s eastern courtyard, which has increased our capacity to house start-ups by over 50%, has just been completed.

"This will enable us to meet the significant and ongoing demand from ambitious entrepreneurs, such as Martin, who want to locate at NovaUCD to leverage our ecosystem to help them grow and scale their companies globally,” he added.

The IBYE programme, now in its fifth year, is run by the 31 local enterprise offices nationwide and supported by the Department of Business, and Enterprise Ireland.