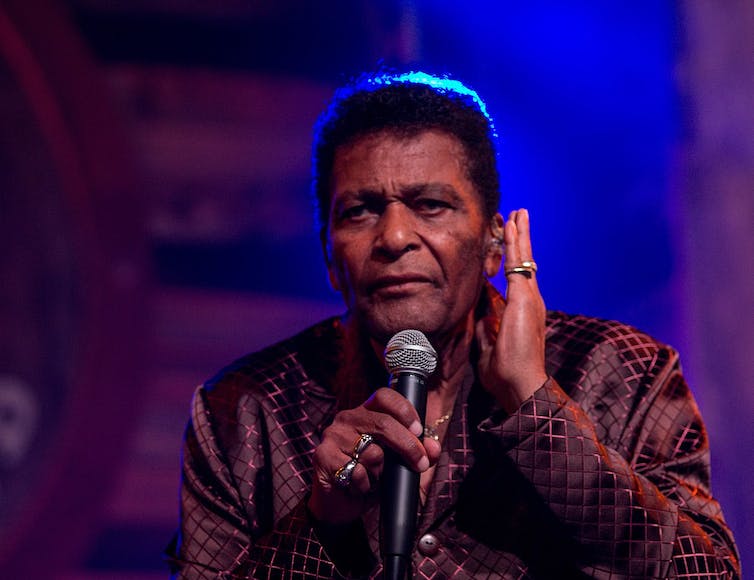 The country artist Charley Pride was one a few black artists who achieved success within country music in the 60s and 70s. Republic Country Club/Wikimedia, CC BY-NC-SA

When most people think of country music, they envisage plaid-wearing, guitar-strumming artists like Johnny Cash or Dolly Parton. They rarely think of Black men like Charley Pride.

Pride, who died on December 11 at the age of 86, was one of the very few Black superstars in the history of American country music. Acknowledging his contributions to the genre, the Country Music Association Awards presented him with the Willie Nelson Lifetime Achievement Award in November.

It was a symbolic moment for the industry as it celebrated the Black presence in country music. It was also a moment that came in a year in which protests about racial injustice swept across the US, and the American country music industry had been pressurised to acknowledge its troubled history of racial difference.

Much of the history of country music has been displaced by convenient myths created during the genre’s commercialisation in the early 20th century. Travelling the American South in the 1920s looking for white performers and songs, Ralph Peers, a white record executive, played an important role in obscuring the Black roots of the genre.

The story of the “founding family” of country music, the Carters, is a well-known origin myth in country music. One of Peers’ discoveries, the Carter Family were a three-piece group from Virginia consisting of AP Carter, his wife Sara and sister Maybelle. The group are credited with popularising country music with their unique harmony style and catchy songs. Less well known, however, is the story of Lesley Riddle, the Black woman who led AP Carter to Black sources and songs, memorising melodies for Carter’s transcription.

This is just one of the many examples of how country music has been whitewashed for nearly a century. The commercialisation of country music consigned the work of Black artists to “race records”, while white performers were categorised as “hillbilly” or “country and western”. This was a filtering process, which determined the mainstream sounds and performers in these categories for several generations.

From the harmonica player DeFord Bailey in the 1920s and 30s, through to Pride in the 1960s and 70s, and Darius Rucker in the early 2000s, this categorisation also consistently sidelined the contributions of people of colour in country music, with the exceptions only proving the rule.

Today, the country music industry and its mainstream sounds remain white and anodyne. The norm is songs, often mid-tempo ballads, about drinking, pickups and relationships. A benign feel-good vibe predominates and topics that might be deemed controversial are avoided.

However, a new generation of Black performers has emerged both within the mainstream and at the margins of country music. These performers are shifting the discourse around race and challenging the origin myths of country, much to the discomfort of the industry. The rise of Black Lives Matter this year has also upped the ante on Nashville’s silence around racial injustice.

To some extent, this Black presence has been commercially incorporated. For example, the music of young, rising Black country stars Jimmie Allen and Kane Brown could be said to mimic mainstream country fare with its narratively conservative lyrics and traditional country style. Although, both do occasionally reference hip hop sounds and racial identity.

There are, however, those who strive to break the mould. In recent years there has been an emergence of genre-blending artists who mix hip hop rhythms and country tropes, which have proved disruptive. One stand out example is Lil Nas X whose song Old Town Road became an internet sensation in 2019 and sparked a row within the industry after it was removed from the Hot Country Songs chart. Explaining its decision, Billboard, which runs the chart, said that the song “does not embrace enough elements of today’s country music to chart in its current form”. This incident spawned the equally popular remix featuring the country star Billy Ray Cyrus, who defended the track as country.

Much more forceful and breaking more from that Nashville mould, the music of Black female performers Rhiannon Giddens, Yola and Mickey Guyton is bold. Guyton, a Black Texan singer, released the song Black Like Me in June this year, with punchy lyrics on the experience of growing up Black in America. The chorus runs:

If you think we live in the land of the free

Although there has been overwhelming silence in the industry about racism, a handful of white artists have made forceful statements about racial injustice, most notably the Appalachian country star Tyler Childers.

In September, Childers released an album titled Long Violent History. It quickly drew attention as a departure from his usual material. First, it mostly consists of covers of old fiddle tunes. More surprising was the title track, a ballad in which Childers asks his listeners to put themselves in the place of African Americans facing daily injustices and violence.

The song invites the listener’s empathy, appealing to an imagined rural community’s sense of fairness and justice, and its mythologies of violent redemption:

How many boys could they haul off this mountain

Shoot full of holes, cuffed and layin’ in the streets

‘Til we come into town in a stark ravin’ anger

Looking for answers and armed to the teeth?

Part of what makes Childers’ reference to a “long violent history” so resonant is that many of the fiddle songs that precede the title track reference this history, with several referencing Civil War conflicts. When the title track plays out with a few skewed bars of My Old Kentucky Home, a 19th-century minstrel song associated with white supremacy and the antebellum South, we are reminded of the role of music in both celebrating and challenging the racial order of things in the US.

Country music’s reckoning with race has only just begun. As its Black roots are further exposed and pioneers like Charley Pride take on fresh significance, we can only hope that the future of the genre is more diverse.