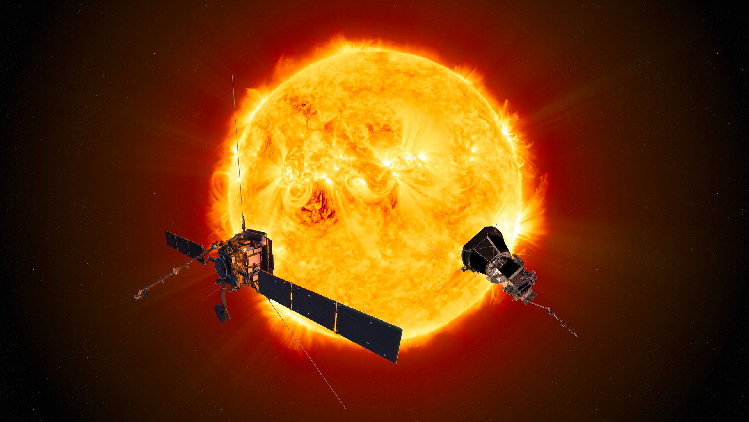 A UCD developed heat-resistant coating will enable the ESA’s Solar Orbiter that lifted off from the earth [today] to get closer to the Sun than any other satellite, as it sets out to unlock the mysteries of the 4.6 billion-year-old star at the centre of our solar system.

It will take the Solar Orbiter two years to reach its initial operation orbit around the Sun which is at an average of 150 million kilometres from the Earth.

The aim is to see the European spacecraft come within 43 million kilometres of the star.

At this distance, the Solar Orbiter will be subjected to an average temperature of 500 degrees Celsius as it circles the star 22 times over the course of its expected two-years of observations.

To survive such intense heat and radiation, the satellite’s panels, made of several layers of titanium, have been coated in two special materials specifically developed for the Solar Orbiter mission.

“SolarBlack” and “SolarWhite” were developed by Irish company ENBIO, who worked on the technology alongside Professor Kenneth Stanton at his team at the UCD School of Mechanical and Materials Engineering, while the company was headquartered at NovaUCD from 2011 to 2015.

The technique to apply the coatings uses a method similar to how titanium medical implants are coated with artificial bone — blasting off the oxide layers on the surface of the titanium and allowing another material to replace that layer.

Through UCD’s knowledge transfer team at NovaUCD the SolarWhite patented technology was subsequently licensed to ENBIO.

Around 80% of the Solar Orbiter will be covered with either SolarBlack or SolarWhite, according to ESA.

The mission aims to provide the first images of the uncharted polar regions of the Sun in a bid to better understand the physics behind the heliosphere, solar winds, and the star’s internal workings.

“With the Solar Orbiter launching [today] from Cape Canaveral the collaboration between ENBIO and UCD to develop the “SolarWhite” coating now kicks into its own as the heat shielding radiator panels keeping the scientific instruments on the mission cool for the next 10 years will be exposed to space for the first time,” said John O’Donoghue, CEO, ENBIO, speaking from the Florida blast off site.

“The development of Solar White thermal control surface for this immensely important solar science mission would not have been possible without ENBIO collaborating with Professor Ken Stanton and his materials engineering team at the School of Mechanical and Materials Engineering at University College Dublin, Ireland.”

“They provided the deep ceramics knowledge and expertise and access to vital measurement equipment that was required to develop this coating,” he explained.

“While this collaboration is the culmination of Enterprise Ireland supported work that began in 2012, after ENBIO located to NovaUCD, it is the performance of the “SolarWhite” coating over the lifetime of the mission that counts. We will now quietly celebrate the mission and our part in it over the next decade or so.”