An 18-month study by University College Dublin researchers piloted the use of a solar-powered tracking device originally designed for vultures but adapted for use on large herbivores such as giraffes, elephants and wild horses.

The tracker's solar-panels proved an effective power source during the lengthy trials; demonstrating how its use could address some of the serious challenges faced by those engaged in conservation and field research.

“Incorporating solar panels allowed animals to be tagged with smaller and lighter GPS devices without losing any of the functionality of larger devices" said Emma Hart, Laboratory of Wildlife Ecology and Behaviour at the UCD School of Biology and Environmental Science. 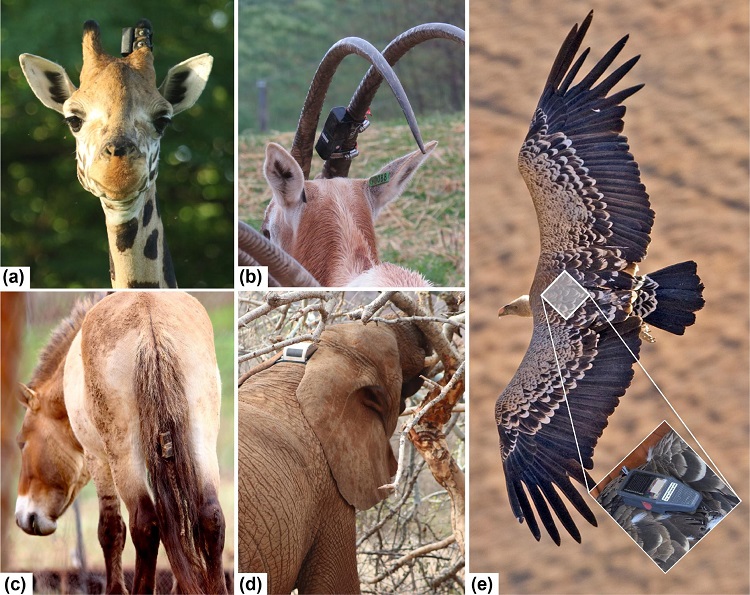 Devices worn by animals that record their location, their behaviour and environmental conditions have generated vast amounts of data to aid in conservation efforts.

However, as researchers tag an increasing number of species, animal welfare concerns have grown.

Attaching, and later removing, a tracking device to an animal involves capturing, restraining, and in some instances sedation.

This process can be stressful for animals. Significantly lessening the impact that such tagging has on the behaviour, health, or welfare of an animal is a paramount concern for researchers.

Another issue is that the batteries that power wildlife trackers vary in size and weight, and often this limits their use as the majority of mammal species still fall outside of the minimum body weight bracket for many tracking devices.

Researchers must comply with the animal welfare guidelines that devices weigh no more than 2–5% of an animal’s bodyweight.

Furthermore, variation in morphology means that certain species are difficult to tag with cumbersome units, regardless of the size and weight of the animal.

The unusual long neck of giraffes for example do not easily support the collar type attachment used on other large mammals such as lions.

The analysis carried out by Emma and her colleagues demonstrated several answers to these concerns; namely that the small size and longevity of the solar-powered tracking devices tested could allow researchers to remotely gather information on a wider range of animals and across their entire life spans without a need to replace failed trackers.

The study, carried out by UCD, the Giraffe Conservation Foundation in Namibia, and Dartmouth College, found that, once charged, the units maintained high voltage throughout the testing period.

This remained the case even in conditions with little or no solar energy, i.e. when animals were standing in the shade or during periods of reduced daylight, namely night time, winter and the wet season.

“Devices with longer lifespans will potentially lead to a greater quantity and quality of data collected per individual captured and a reduced frequency of recaptures for removal or replacement of failed devices,” Emma said.

The importance of collecting behavioural data can not be overstated, as it allows new insights into how animals are reacting to changes in their environments. Such information is key to keeping conservation efforts successful. 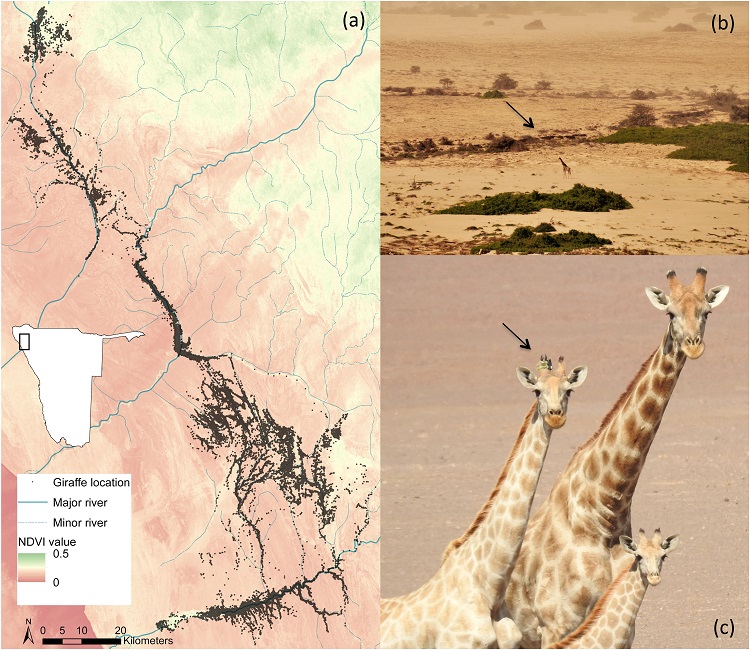 Map of the study region in the northern Namib Desert, Namibia, showing (a) giraffe locations recorded using solar-powered GPS tracking devices fitted to 20 giraffe between July 2016 and February 2019; (b) a group of giraffe with an adult female tagged with a GPS tracking unit, and (c) a distant giraffe moving between patches of vegetation in the arid desert landscape

A second paper by Emma and the UCD Laboratory of Wildlife Ecology and Behaviour highlights this, using data from the solar-powered trackers to show how vulnerable the giraffes of the Namib Desert are to the effects of climate change.

The results showed giraffe activity was constrained by temperatures above 30 °C during the day, while at night the animals’ behaviour was synchronised with the phases of the moon.

“Specifically we found that giraffes were significantly more likely to be active on moonlit nights than on dark nights, with even a small fraction of lunar illumination resulting in significantly higher levels of activity” Emma said.

“The study demonstrates some of the first evidence of the strong effect of moonlight on the nocturnal behaviour of large wild herbivores... [and] it shows that ungulates [primarily large mammals with hooves] have plastic activity patterns that are vulnerable to modification by external factors.

“Our results reiterate the importance of identifying areas that can continue to support healthy populations of giraffe despite rising global temperatures and also highlight the importance of limiting light pollution when making management decisions regarding wild giraffe and other large ungulates.”