Microscopic animals are busy distributing microplastics throughout the world’s soil 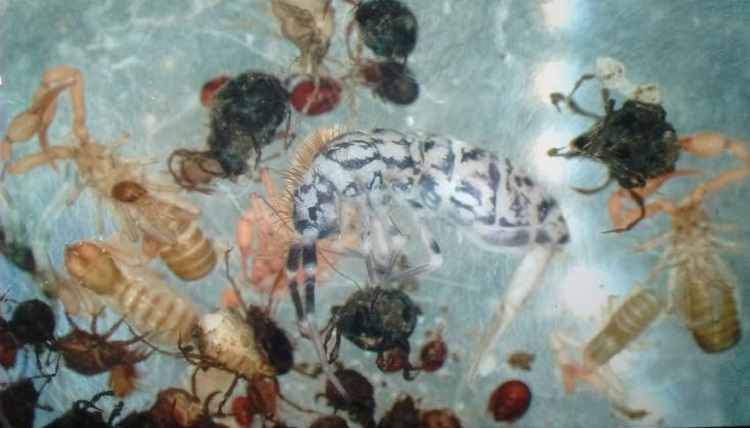 A particularly large collembolan (almost 2mm long) found in an oak forest in Ireland. Soil collembolan species are typically much smaller, paler, and might not have eyes. Together with microbes these animals help elements like nitrogen cycle between plants and soil. Tancredi Caruso

King George Island, the largest of the South Shetland Islands, lies 120km, about a day’s sail off the northernmost tip of Antarctica. It’s a rugged place – home to seals, penguins, a few scientific bases and not much else. Though the climate is mild compared to the mainland, temperatures still barely reach above freezing in the summer months and the island is almost entirely covered in ice. If microplastics can enter the food web here, they can probably do so almost anywhere on earth.

But this is exactly what colleagues and I discovered, when we searched for microplastics inside tiny creatures found on King George Island. Our results, now published in the Royal Society journal Biology Letters, show that microplastics are becoming an integral part of the soil food web.

Microplastics are pieces of plastics smaller than a few millimetres, and usually much smaller than that. These bits and pieces break off from the hundreds of millions of tons of plastics that are produced each year, and collectively form a huge amount of waste. And, as plastic degrades only very slowly, it has dramatically accumulated in the environment, everywhere from the deepest ocean floors to the North and South poles.

Most evidence on the effects of plastics on the environment comes from aquatic ecosystems but there is increasing evidence that plastic pollution is affecting plants and soil as well. However it is not yet clear the extent to which plastics have actually entered terrestrial food webs – and this is where our new research comes in.

In this study, led by my colleagues Elisa Bergami and Ilaria Corsi from the University of Siena, we focused on Cryptopygus antarcticus, a species of “collembolan” also known as the Antarctic springtail. Collembolans are millimetric to submillimetric animals very close to insects, and are an important part of all soils across the world.

The particular species we analysed is central to Antarctic soil food webs but is also a good representative of the numerous microscopic animals that inhabit soils throughout the world. I myself studied populations of Antarctic collembolans back in 2005, but at the time had not thought these animals could be ingesting plastics, given how far Antarctic soil seemed from sources of pollution.

But this time, Bergami took samples from King George Island, where she found the animals feeding on algae, moss and lichens that grew on polystyrene foam. This foam was literally random junk stranded on the beach, made out of the same types of polystyrene that make up ordinary packaging. It’s the same type of plastic waste we nowadays find washed up on beaches throughout the world.

We wanted to know if these soil animals had ingested pieces of polystyrene. It is not easy to find tiny fragments of plastics in the gut of animals you can barely see with the naked eye, of course. That’s why we turned to infrared spectroscopy – the same sort of technology used by forensic scientists at crime scenes to break down tiny scratches of paint and trace them back to the original car. Using this new approach, we could finally see polystyrene micro-fragments in the intestines of these collembolans.

What are the implications? Soil animals such as collembolans may be minute but there can be tens or hundreds of thousands of them per square metre of soil. These high numbers mean that collembolans may transport and thoroughly redistribute fragments of microplastics through the entire length and depth of the soil. As both microplastics and small but very numerous soil animals are found everywhere, this redistribution of plastics could be a global process.

We have more work to do before we can truly understand the impact of microplastics relative to other grave environmental pressures such as chemical pollution and climate change. Yet, if even collembolans in the maritime Antarctic are ingesting microplastics, there is a very high risk that they have already deeply penetrated the soil food web, potentially with negative impacts on the interactions between plants and soil. In future, we scientists will have to quantify these impacts and discover exactly how microplastics fit into the global cycles of matter