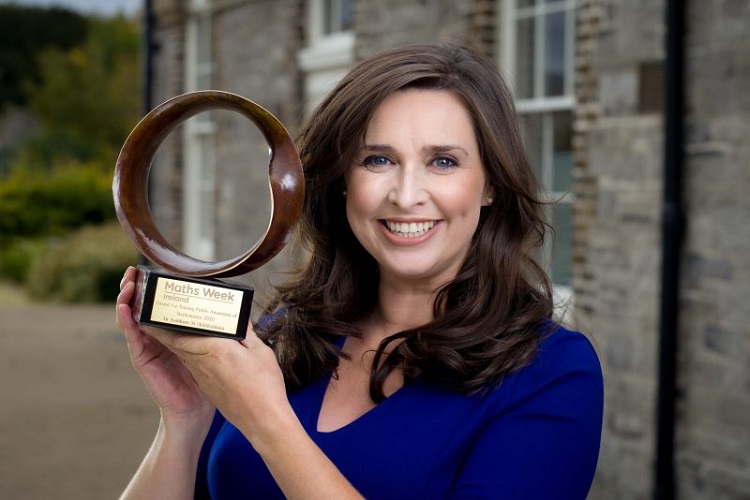 Maths Week Ireland have named Dr Aoibhinn Ní Shúilleabháin the recipient of this year's Awareness Award for her “outstanding contributions” in promoting maths to the public.

Presented annually during Maths Week, the all-island festival of maths and numeracy, the 'Raising Public Awareness of Maths' award celebrates outstanding work done to raise the importance of mathematics across the island of Ireland.

Dr Ní Shúilleabháin, of the UCD School of Mathematics and Statistics, was recognised for her work and research said Maths Week co-founder Dr Sheila Donegan.

“[She] has made an outstanding contribution to the promotion of maths to the public. She is a very worthy recipient of the Maths Week Ireland award for Raising Public Awareness of Maths.”

Dr Ní Shúilleabháin has been a strong advocate for social inclusion and equality. With her UCD colleague Dr Anthony Cronin, she developed the Maths Sparks programme - a series of problem-solving workshops for students of lower socio-economic backgrounds led by UCD student volunteers.

You can find all the Maths Sparks resources mentioned in the article here to freely download and use in your school or youth club https://t.co/5tXJIXZYYL
Our research on the impact of participation on students’ confidence in their mathematical ability is also there.

As a former post-primary teacher, she recognised practical challenges facing teachers and pupils and strives to make the teaching and learning of mathematics an enjoyable experience for all, reads her citation by Math Week Ireland.

“I am passionate about making mathematics accessible to everyone and hope that some of my work over the years has encouraged people to pursue their interests and education in mathematics,” said Dr Ní Shúilleabháin, accepting her award.

“While we have a heritage of some amazing mathematicians in Ireland, such as William Rowan Hamilton, mathematics has not always been accessible to everyone in the country and having an exam “for girls only”, with honours maths available to only an elite few, has allowed the subject to have some historical negative connotations.

“I believe we should celebrate mathematics in our educational and cultural settings and assure our students that mathematics, like any other subject, can be practiced and improved. In these times where we are bombarded with information and data, mathematical literacy for all members of society plays a hugely important role and I hope to continue to work to improve the mathematics experiences of learners across the country.”

The Public Awareness Award was inaugurated in 2016 to honour outstanding work in raising public awareness of mathematics across Ireland.

Among its previous recipients are:

More than 360,000 students across Ireland registered for this year’s Maths Week events, which run until the 18th October, and the festival is run with support from the Department of Education and Skills; Science Foundation Ireland, the Department for the Economy in Northern Ireland, Xilinx, ESB, as well as with support from universities, institutes of technology, libraries, schools, training colleges and employers.