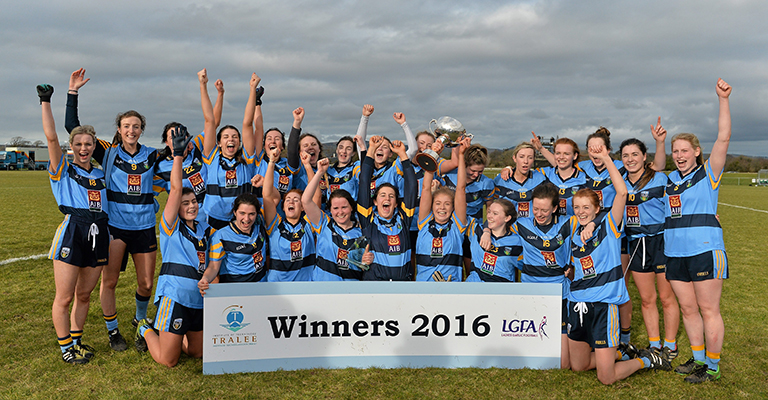 The University College Dublin Ladies Football team has beaten the University of Limerick to claim their first O’Connor Cup title since 2006.

The Belfield outfit won their first intervarsity Ladies Football title in ten years by 0-9 to 1-7 in an exciting clash at the IT Tralee GAA pitch. The win denied the Limerick team their third successive O’Connor Cup.

The first half of the game was low scoring. Kate O’Sullivan got the opening point of the match and the sides went in level 0-2 apiece at half time.

But shortly after the start of the second half, UCD took command of the affair. Player of the Match, Nicola Ward, whose twin sister, Louise, was playing on the opposing University of Limerick team, found the net from a long-range shot that dipped into the top right hand corner of the UL net for the match’s only goal in the 35th minute.

Nicola Ward scores the only goal of the game

Then UCD substitute Emma Guckian scored two points and her teammates Roisin Curran and Niamh Collins added a point each to extend the Belfield team’s lead to 1-5 to 0-2.

Pictured top: The UCD Ladies Gaelic football team celebrates, with captain Ciara Murphy (centre) holding the cup, their victory over University of Limerick at the IT Tralee GAA grounds, to claim their first O'Connor Cup since 2006

Roisin Leonard led a spirited fight back when she scored UL’s first point of the second half with 13 minutes played. Roisin Curran and Elaine Scally then added two more points for UCD.

Leonard scored a further one point from play and four frees, including one deep in injury time, that left just one point separating the sides.

But UCD held out to survive the UL comeback and Ciara Murphy lifted the O’Connor Cup.

Meanwhile, in rowing, UCD have also claimed the Gannon and Corcoran Cups in the Colours races on the Liffey.

In the men’s race, the UCD crew got the better start in difficult conditions. Trinity launched several attacks, but the Belfield men held off the Trinity crew’s challenges, especially towards the end of the race, and won by over a length.

In the women’s race, the more visibly powerful UCD crew got off to a fantastic start. They extended their early quarter-length lead at the Ha’penny Bridge to one length by O’Connell Bridge, winning with just under 20 seconds to spare.

UCD’s women’s novice crew also won the Sally Moorhead Trophy. A mistake in the timing of a stroke by Trinity’s stroke woman meant that UCD’s novice team had an easy victory.

And UCD’s sporting triumphs did not end there last weekend, as both UCD Waves, the Ladies Soccer team, and UCD AFC recorded impressive victories.

UCD AFC recorded their first win of the season in the Airtricity League First Division over Cabinteely, beating them 2-1 while UCD Waves beat Peamount United 5-3 in the Women’s National League.

What the #GAA is all about! Twin sisters Louise & Nicola Ward embrace after the O'Connor Cup Final on Saturday! pic.twitter.com/xF1SH7r9kP