The School of Philosophy is delighted to welcome a Mitchell Scholar, Annabelle Barry, from Princeton University

'Criminal Ignorance': a one-day symposium in law and philosophy on a recent book by Alexander Sarch, Criminally Ignorant; Why the Law Pretends We Know What We Don't (Oxford 2019).

For programme and further details, please see the symposium website:

Sponsored by the College of Social Sciences and Law Research Fund, the Centre for Ethics in Public Life, and the Trinity College Dublin School of Law. 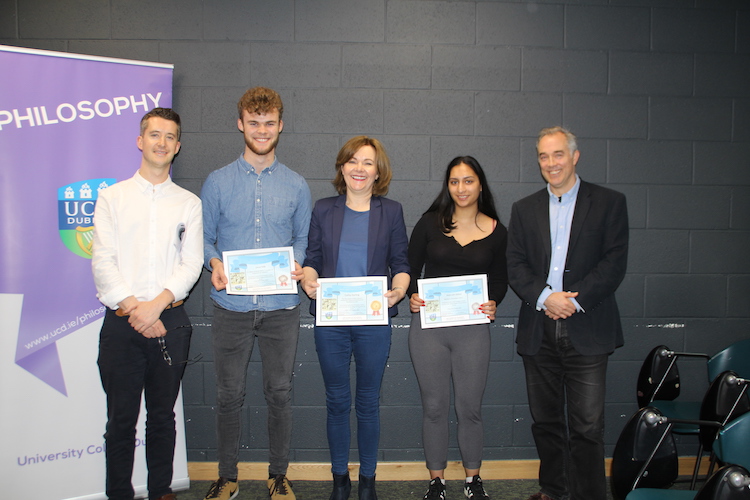 Certificates and prizes were awarded to the winners of the 2018/19 Tipple Prize on Friday 25 October 2019. The winners were (click on the title to read the essay):

Runner-up: Mahrukh Abbasi, for 'Moving vs. Persuading a Racist.pdf'

Runner-up: Lorcan Kelly, for 'A Critique of Moody-Adams' Conception of Forgiveness as Unilateral.pdf'

The 2019/20 Tipple Prize is now open until 30 September 2020. Entrants must have registered for at least one UCD Stage 1 Philosophy module in the year 2019/20. Essays must be: no longer than 1,500 words inclusive of footnotes but exclusive of bibliography; on a philosophical topic; and submitted in word format to daniel.deasy@ucd.ie.

The School of Philosophy is delighted to welcome, Fulbright Scholar, Alexandra Corcoran from Haverford University, Pennsylvania.

Assoc Prof Dragos Calma - Philosophy at the Crossroads of Civilisations

Mention Greek philosophy and one thinks of Plato and Aristotle but what about Proclus? Newly-appointed Associate Professor at UCD School of Philosophy Dragos Calma hopes to make this 5th century thinker if not a household name then at least better appreciated by the modern academy.

Proclus (412-485) was the victim of one of philosophy’s great misattributions – his work was passed off for several centuries as belonging to Aristotle. This creative mix-up is part of an intriguing story surrounding one of the last great custodians of ‘the School of Athens’. It’s a story of how a pagan text, reworked by Muslims, ended up being used in the Catholic Church to explain Christian doctrine.

Conference Medical Ethics and Law at the End of Life

This is an international, inter-disciplinary conference bringing together different viewpoints on ethical, philosophical and legal issues arising at the end of human life (both the adult’s life and the child’s life).