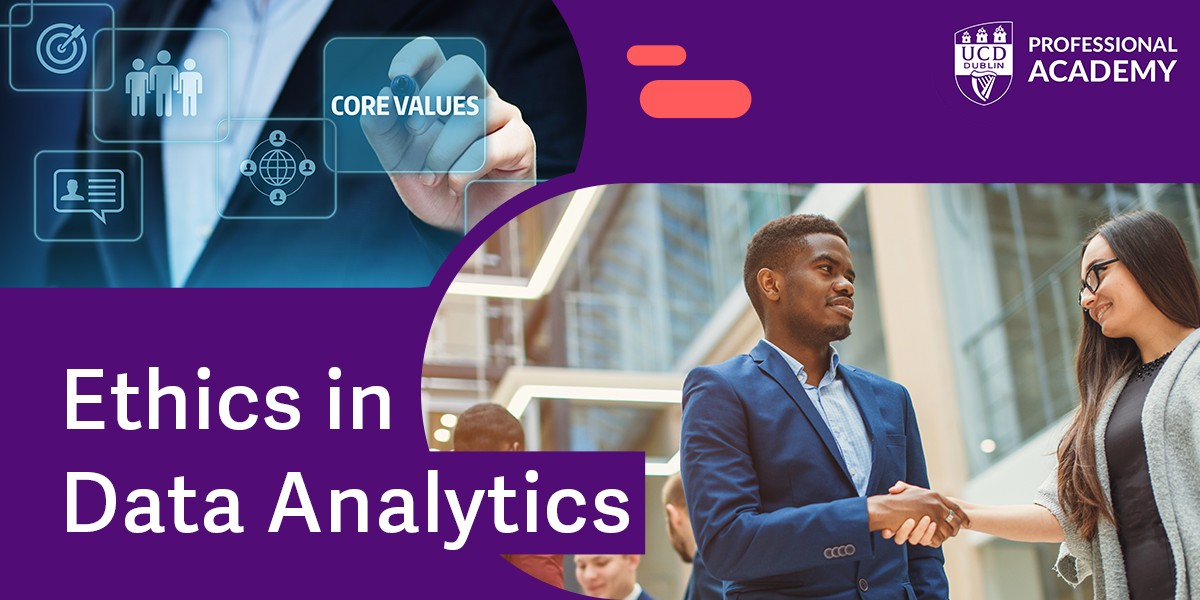 Why do ethics matter in data analytics? It’s a simple question with a complex answer.

Data analytics involves the collection and analysis of large amounts of data. All of this data is derived from users, who enjoy certain rights. How companies process that data has implications for all parties involved, which is why it’s vital that it is appropriately safeguarded.

UCD Professional Academy recently hosted a webinar titled ‘Ethics in Data Analytics’ in partnership with SAS Software. Lecturer in Data Analytics, Shubham Jain, outlined the nuances of ethics in the arena, and the major concerns for both users and corporations.

In outlining the role of data in modern society, Jain explained that machine learning is being used to make critical decisions that affect people’s lives. Phenomenal amounts of data are being collected, processed and analysed to support the same. Decisions made using algorithms aren’t often apparent, or well communicated to the public, leading to a lot of confusion around the subject. It is worth asking, How Data Literate Are You?

Moreover, a growing number of data leaks is taking place, resulting in people being wary about data collection, retention, and algorithmic decision making.

Data collection must be based on consent, said Jain, highlighting that almost every website now asks for permission to access personal data like cookies, or the IP address of their device in order to optimise their experience.

The following areas are of particular interest insofar as data analytics are concerned:

Who is collecting the data? Where and how is it being stored? Is it being shared to any third parties and if so how and why? What are the latest Innovations in Data Analytics?

There are also emerging questions in the domain of machine learning and artificial intelligence. These may be compared to decision-making in self-driving cars: how should a car react in the case of a collision, who should the car seek to protect? As a new development of the decades-old trolley problem, it’s one  without any simple answers.

Jain discussed a series of case studies, shedding light on the importance of strict adherence to guidelines and regulations around data collection.

In 2017, it was shown that it was possible to list rental housing advertisements on Facebook that would not be shown to certain categories of user such as African Americans, people interested in wheelchair ramps or people interested in Islam, Sunni Islam and Shia Islam.

This is despite the fact that there is US legislation that makes it illegal to publish advertisements “with respect to the sale or rental of a dwelling that indicates any preference, limitation, or discrimination based on race, color [sic], religion, sex, handicap, familial status, or national origin”.

While Facebook claimed that “listings that discriminate against a protected class can be reported and will be removed”, this reactive approach allows for abuse by users.

Another time Facebook was severely criticised was when researchers from Facebook and Cornell University teamed up to study &quotemotional contagion&quot.

While this was an interesting project, Facebook carried it out without consent from these users. Exerting this subtle yet effective influence over people without their knowledge or consent via their newsfeed is undoubtedly an overreach that shows the power social networks can have.

Another example of problematic use of data was the manner in which the YouTube algorithm was shown to be directing users towards “darker corners of the internet” simply because other people of their age or background are watching similar material.

A new approach to Ethics in Data Analytics

What can be done about these issues?

Jain suggests a few potential approaches. While there is no strict or straightforward set of guidelines around data collection, similar frameworks such as the Hippocratic oath (first, do no harm) or journalistic approaches around ethics could pave the way for a more rigid set of rules.

The European Union introduced the General Data Protection Regulation in 2018, which provides users based in the EU with protection from abuse and misuse of their data both online and offline. The regulation attempts to ensure accountability from data controllers.

Similarly, there are laws in the US such as the California Consumer Privacy Act. This act is like the GDPR in that it provides rights to users about how their data is being collected and the right to opt out from the sale of their personal information.

If you wish to know more about the area of Data Analytics, from ethics and beyond, consider one of our Data Analytics online courses.