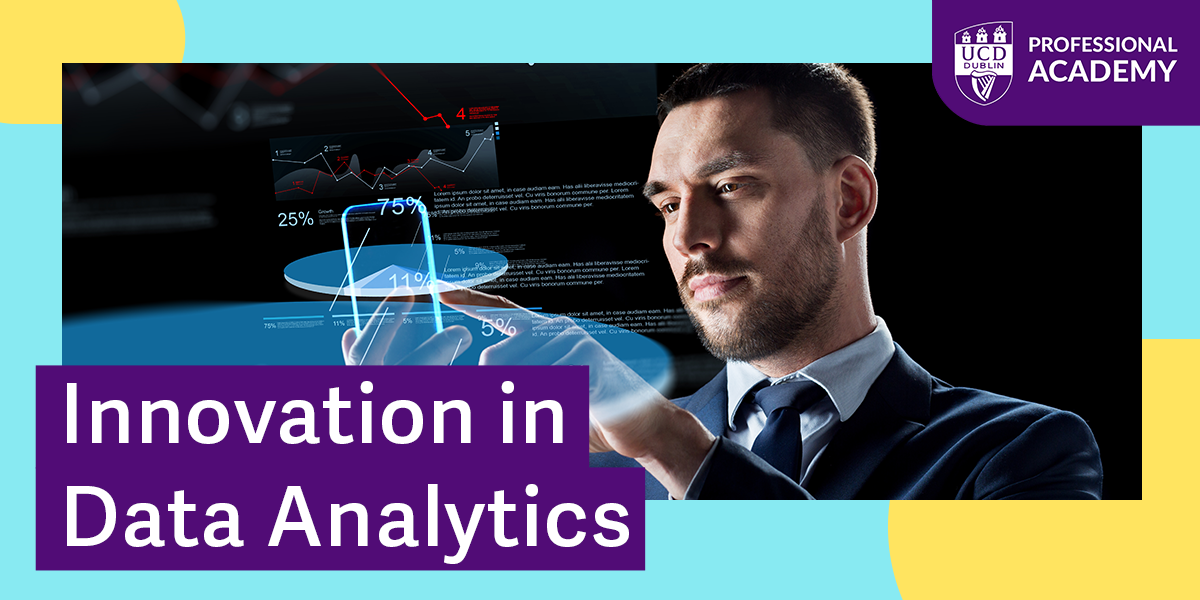 The modern world is awash with data. So much so that over the past decade, there have been constant references to a data gold rush.

This was one of the main takeaways from a recent webinar hosted by UCD Professional Academy, titled Innovation in Data Analytics in partnership with SAS Software.

UCD Professional Academy lecturer in Data Analytics, Shubham Jain states that since 2005, tech companies have supplanted their rivals in oil, energy and banking, ascending to the top spots with the highest market cap in the world.

Where once the likes of GE and Exxon were at the top, now Apple, Microsoft and Amazon rule the roost, with huge market caps pushing into the trillions.

Companies that are barely a decade old can reach enormous market caps despite having a relatively small workforce, as their value comes from their data and what they can do with it.

As Mike Curtis, VP of Engineering at Airbnb put it: “Every time you interact with an Airbnb app or the website, you’re interacting with machine learning in one way or another.”

Such websites hope to optimise user experience by learning from how these users operate within the parameters of the site, be it through using chatbots or payment options to destination selection. How companies process that data has implications for all parties involved, which is why it’s vital that it is appropriately safeguarded. Learn more in our article on Ethics in Data Analytics.

Companies are also in a position to operate entirely remotely, as Jain cites the example of Automattic, parent company of WordPress, which has no offices and barely uses email. This is just one example of a 100% distributed company, with many more following suit.

Where does data come from?

Where does all this data come from? Smartphones are now the norm, and so people are creating an inordinate amount of data every time they look at their device and even when they don’t.

Traffic volume can be determined by how long an individual remains in a static position, and so this is how Google can tell you how long your journey home will be.

Even something as simple as what someone watches on YouTube feeds into this world of data, subsequently creating a list of suggested videos that becomes ever more refined; the more videos a user watches, the better idea the algorithm will have of what to suggest.

While we may not have flying cars, some of the innovations in data technology have been quite astounding.

Take for example advances in the field of computer vision applications. Sites such as myheritage.com are able to animate static images, as well as increasing the quality of the image using what’s called a convolutional neural network. This is a deep learning algorithm that can take in an input image, assign importance to various aspects of the image and is able to differentiate one from another.

They can also colourise photos from black and white, as well as rendering films from decades past in quality hitherto undreamed of.

Using Optical Character Recognition (OCR), programmes such as Microsoft’s Azure can extract printed and handwritten text from images and documents in a variety of languages and writing styles, eliminating the need for time-heavy transcription.

Image understanding allows for the extraction of meaningful information from images. This can be as simple as identifying a purple couch, but its use extends to medical diagnosis, factory operations and police work.

Using spatial analysis, Azure can also determine how people move in a space in real time, to establish wait times in shops and hospitals for example, as well as establishing occupancy count and social distancing, for example.

On a lighter note, Jain demonstrated the capabilities of Quick Draw. This application sees users draw an image, prompted by a suggestion, and an artificial intelligence guesses based on the accuracy (or lack thereof) of the illustration. It may seem frivolous, but this is the world’s largest doodling data set, and it is helping with machine learning research.

There are also programmes and applications that can split vocals from instrumentation, as well as tools that can emulate and recreate text. The number of applications that stem from machine learning and artificial intelligence is only growing, and is as fascinating as it is vast.

Want to learn more? You can sign up here to receive a recording of the webinar session. If learning more about data analytics is something that interests you, why not sign up for an online course at UCD Professional Academy today?