Hurry! Save 10% on select upcoming courses! Enrol before 13th February.

Hurry! Save 10% on select upcoming courses! Enrol before 13th February.

What is graphic design?

Graphic design is the art of combining pictures and text with page layout techniques in advertisements, magazines, books and websites to communicate messages to the reader. 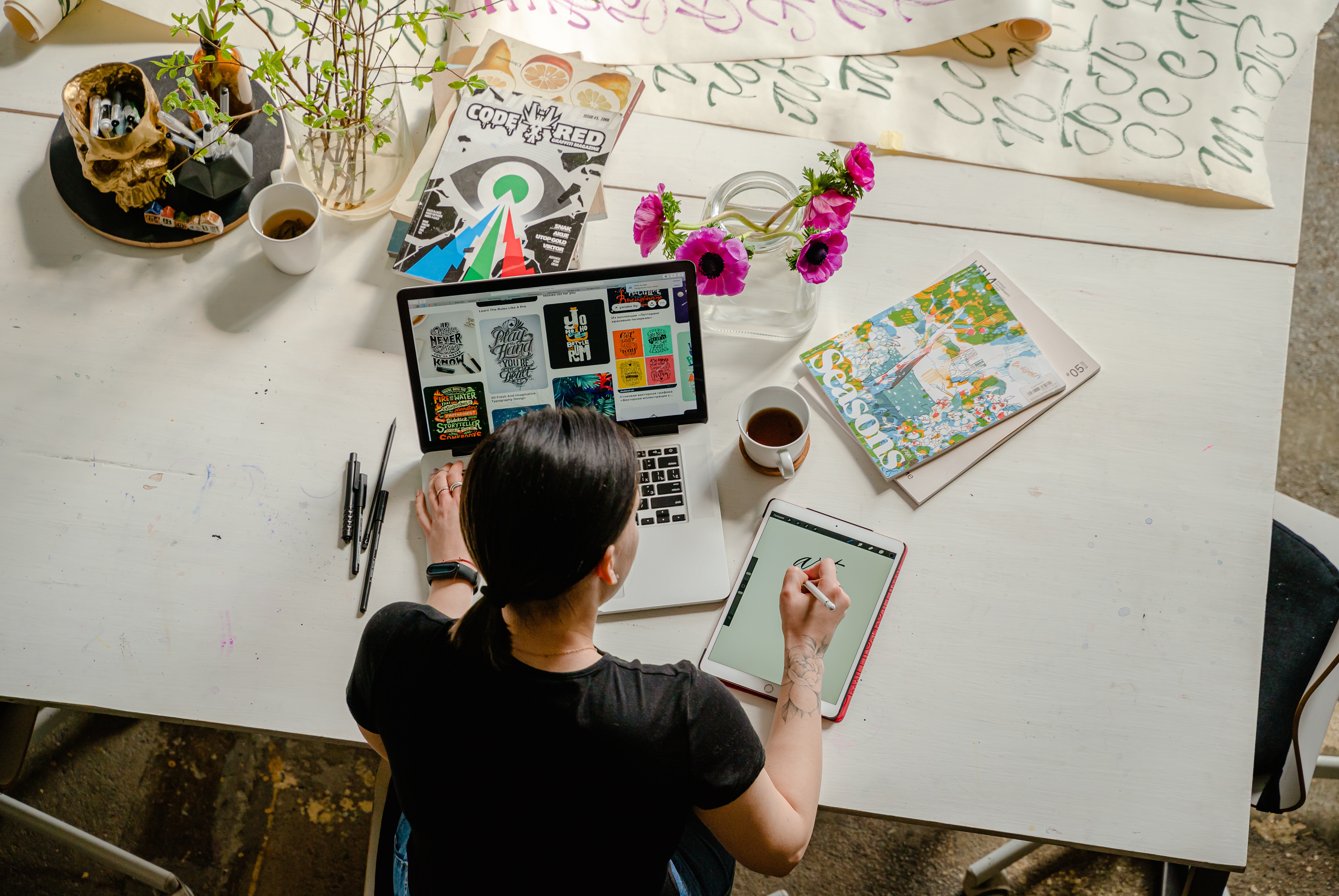 Skilled graphic designers are able to decide on the best types of graphic design styles to communicate the message in the most appropriate tone.

Our guide will describe the various types of graphic design styles available, providing useful advice on how imagery, colour and form can create the kind of branding businesses and organisations are looking to achieve.

We're going to describe ten different styles and explain how they might be used. Graphic designers and Visual Designers must be adept at recognising how each style fits its purpose in a fast-moving industry where design skills, trends and flair for each project play an equal role.

While &quotcontemporary" isn't a specific graphic design style in itself, it's an important inclusion in our list, as it encompasses current design trends. It lends itself to the fast pace of the design industry, changing constantly to adapt to organisations' needs.

There were multiple new contemporary graphic design styles in 2020, believed to be because everyone was at home with more time on their hands during the Covid-19 lockdowns. Striking black and white designs reflected the growth in &quotdark mode" from tech companies, who designed their apps and social media platforms with light and dark modes.

Defined by its simplicity, minimalist graphic design uses only a small number of colours, few elements and a single texture style that is often flat. The elements in the minimalist design are effectively used in imagery because the viewer is almost forced to pay attention to them.

The design is encapsulated by white space and consequently the elements become the default focal point, as there's nothing else to distract the viewer's attention. When used in website design, the minimalist style provides a clean, crisp background, allowing the content to take centre stage.

Minimalism is particularly important for home page designs, a website's most popular page. While a graphic design style in its own right, we often recognise its elements in other styles too.

Scandinavian-style graphic design is inspired by the minimalist style, as it has a stripped-down appearance that enhances the importance of every element. It originated in Nordic nations, such as Norway, Denmark, Sweden, Iceland and Finland.

It is part of the popular design movement that advocates beautiful, simple aesthetics, rather than the more ostentatious alternatives. Scandinavian design uses simple shapes and a small colour palette, with curvy typography and not a serif in sight.

It was born in the 1950s and became renowned for its sophisticated, yet simple, style. Modern Scandinavian graphic design is used for packaging, branding, editorial and web design. Many Nordic graphic designs favour natural colours, based on pale woods such as beech and ash, linen textiles and the natural leather used in physical items, such as furniture and home accessories.

Flat graphic design style was inspired originally by a combination of three other styles: modernism, Scandinavian and Bauhaus. It borrows some of minimalism's principles, as few colours are used. When variations of a single colour are utilised, it’s usually only slightly lighter or darker, creating a two-dimensional shadow-like effect.

The chosen colours are normally bold and distinct, bearing the Bauhaus-style elements of colour theory and visual hierarchy in mind. Black borders aren't necessary, as lines are created by the actual elements. The images are often straight, with just a few curved edges.

The typography is super-clean, matching the style of the design. A flat graphic design style has been made popular by the likes of Apple, Google and Microsoft. The latter has incorporated it into software products used by millions of people worldwide, creating a strong brand. The flat style is ideal for software, as the simple imagery uses smaller file sizes and is, therefore, faster to load.

Retro graphic design styles comprise a wide range of styles, typically from the 1950s to the 1970s. These include art deco, gothic, art nouveau, Baroque, New York-style, psychedelic and ླྀs and ྂs-themed styles. They're all distinct styles in their own right but come under the broad umbrella of being &quotretro&quot.

These types of graphic design styles spark nostalgia, transporting the viewer to an earlier period in their life that can rekindle a strong sense of belonging or meaning. Viewers feel sentimental and this evokes a &quotfeel good" reaction. This is why retro style is ideal for commercial advertising and branding.

Retro style can combine different styles to create more complex designs, such as mixing art deco and New York, or gothic and Baroque, for example.

The Bauhaus movement inspired a graphic design style often described as &quotfunctional over visual&quot. The German art movement from the early 20th century featured a minimalist design style that used only a few elements, all of which had a function. It wasn't flowered up in any way.

The Bauhaus movement is modern art combining a wide selection of art materials, mediums and disciplines. Born in Germany, the movement was popular during the 1920s, using the motto, &quotForm follows function."

Today's Bauhaus graphic design style's key hallmarks include a distinctive palette of primary colours, or a simple design of black and white with one single colour, like blue or red. It comprises collage graphics and often isolated figures, or features such as eyes, creating a surrealist style. It is known for experimental layouts, pre-empting the 1990s-era gridless layouts.

The art nouveau graphic design style could be called the first truly modern design style. It was created as a result of Western artists wanting a style they could call their own. It's recognised by its long, organic lines, often used to create plants, animals and delicate objects.

It is typified by its beautifully decorative and ornamental effect. The art nouveau typography uses natural-looking serifs and shapes to complement the graphics elements.

The designs often use a single colour, with black being a popular choice, combined with subtle shading. This dates from the early 20th century, when printing was expensive, so using a single colour for graphic design was cheaper. The style became iconic and continued into the 21st century for its aesthetic appeal, rather than its cost.

The art deco graphic design style features bold colours, strong geometric shapes and plenty of symmetry. The style is influenced by Cubism, a style that uses solid shapes to create a cube-like effect. The stunning effect can stop you in your tracks, as it almost demands that you give it a second look.

Its forceful ambience is a valuable advertising tool in today's competitive market, where it's important for websites to have a memorable and unique design to help them stand out from the competition. Art deco graphic design has intense shapes, bold typography and highly-contrasting colour schemes.

One of the most recognisable design styles in history, art deco graphic design has been used in just about every medium, from art work to the digital world of video games.

New York-style graphic design emerged during the 1950s and 1960s. A group of city-dwelling artists created an informal creative group known as the New York School, practicing dance, poetry and music, as well as art. This led to a free-flowing avant-garde design style that was bright, bold and experimental.

The typography often uses colourful additions such as shapes, rather than having plain text, to create different and interesting effects. This kind of design style on branding and websites can look innovative, offering viewers an unusual quirkiness that attracts attention.

This design style was reportedly the basis of abstract expressionism. New York-style graphic design evolved in an era when New York became the world's cultural centre. During this period, advertising, art, fashion and graphic design were intertwined and created in abundance in New York City.

Victorian style graphic design is an elegant, ornate and busy style that is bursting with content. The characters, borders, shapes and letters fill the entire image. It is the opposite of the minimalist style. Reflecting the style of Britain in Victorian times - especially royalty - it suits brands that want everything to be opulent and gilded.

A style still seen in today's royal palaces, Victorian design is often symmetrical, with rather quirky typography, featuring serif-laden, swirling letters that can appear eccentric. The colours can be muted, reflecting the rarity of brightly-coloured inks in the Victorian era of printing.

Victorian style graphic design is often associated with the royal family and the upper-classes. In terms of branding, it is believed to appeal to this social demographic of people. It has come back into vogue in recent years, after falling out of favour during the mid to late 20th century. Today, it features rhythmic, pattern-filled images, often floral ones. It often pairs various typefaces, creating bold and ornate type.

How many types of graphic design styles are there?

While some industry experts define eight major types of graphic design styles, in reality, there are many more than this. New styles, including hybrids combining more than one existing style, are evolving all the time.

What are the main uses for graphic design?

Graphic design creates a visual identity for individuals and organisations. It is used to create a brand, for marketing and advertising purposes, on websites, in publications and for packaging materials.

What is modern graphic design?

Modern graphic design covers almost every aspect of our life relating to visual communication. From posters and books to 3D animation and complex mobile applications, graphic design has branched out into many different mediums. Graphic designers are expressing their creativity to satisfy evolving needs.

What makes a good graphic design?

The elements of a good graphic design are the individual components and how they fit together to create the design - essentially a work of art in its own right. Simply put, the artwork is created by taking the colours, textures, shape and text to blend together into a well thought-out graphic design. The aim is to draw the reader's eye to the message, increase readability and communicate quickly and convincingly.

What are the most important skills of graphic designers?

The main attribute is creativity, a crucial graphic design skill. It provides the basis for all graphic design creations. In addition, having good communication skills helps, as this enables you to see the bigger picture and determine how your design will help convey a message to the masses. As well as inbuilt creative skills, having a sound knowledge of modern software and creative apps is vital, as they are the tools of your trade. The more you can develop your skills, and the more experience you gain, the better your graphic design salary expectations will be.

How do you begin a graphic design career?

For many people, completing a Professional Diploma in Graphic Design is a way of turning creative inspiration into useful digital and print assets to help forge a new career.

Our graphic design course can help you to master multiple skills, such as using Adobe’s industry-standard design tools. These include Adobe Photoshop, Illustrator and InDesign. You can learn how to create graphics, icons, documents, logos and more, while building a professional portfolio.

Download our brochure for further details, or contact us to find out more and to secure your place on one of our forthcoming courses, which include live online lectures with an industry expert.