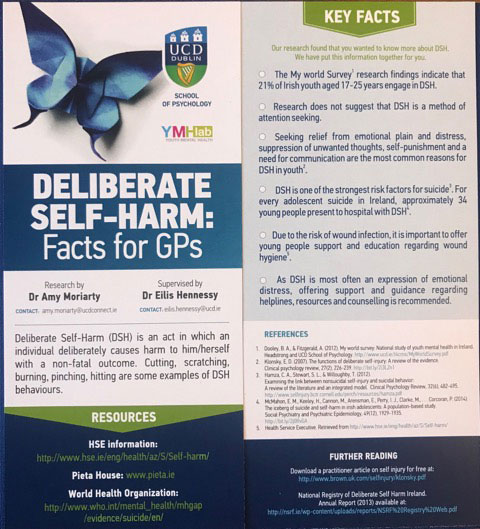 Dr Amy Moriarty carried out a survey of GPs in Ireland to explore their knowledge of and attitudes towards young people who engage in deliberate self harm.  We are very grateful to everyone who took part in the study and took the time to fill in our on-line questionnaire or to return a completed hard copy.

Here are some of our key findings:
•    A total of 178 GPs and 47 GPs-in-training took part from across the country.  Some completed hard copy questionnaires, others filled in the survey on-line.
•    Findings demonstrate that GPs have high levels of empathy towards young people who engage in deliberate self harm.
•    Some GPs expressed negative attitudes but they were not strongly endorsed, and were significantly higher in male respondents.
•    GPs who felt more confident of their knowledge about self harm and who had attended specialist training, scored higher on measures of empathy than those who were less confident about their knowledge and who had not received training.
•    GPs who endorsed statements that blamed young people for engaging in self-harm and who believed that they could stop if they wished, were more likely to endorse negative attitudes.
•    The majority of GPs (78.5%) want further training in helping young people who engage in deliberate self harm, particularly in relation to advising parents and developing their therapeutic skills.

A ‘Quick Reference’ information card on self harm in young people is now available.  For copies of the card or more information on the study contact amy.moriarty@ucdconnect.ie or eilis.hennessy@ucd.ie