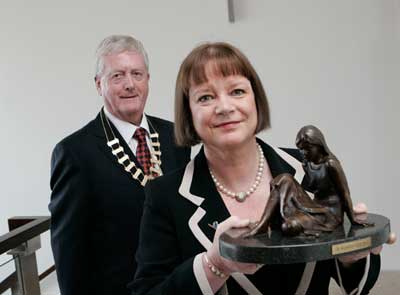 Prof. Brennan received the award for an article on corporate governance published in Accountancy Ireland magazine in December 2011.

The topical article reported on two broadly similar cases – the Feltex case in New Zealand and the Centro case in Australia -- where the courts took different views on the extent to which company directors are entitled to rely on the work and advice of company managers, external accountants and auditors when approving a company’s financial statements. Brennan came across the material thanks to an Erskine visiting fellowship at the University of Canterbury at Christchurch, New Zealand in July 2011.

The Feltex judge said that directors “are entitled to impose trust in others so long as they take reasonable steps to ensure that such trust is warranted and are not alerted to reasons why the trust may be misplaced”.

“In the Feltex case, the judge concluded that directors were entitled to rely on specialist advice and found in their favour that they had taken due care and skill in exercising their responsibilities,” Brennan explained.

In the Centro case, the Australian judge took a different approach. He concluded that the legal declaration required of directors that the accounts show a true and fair view could not be delegated.

“In finding against the directors, the [Centro] judge acknowledged that directors are entitled to rely on others, but that such reliance does not discharge their entire obligation. Directors must have sufficient knowledge of accounting practice and basic accounting concepts. They must apply their knowledge based on all the information they receive as directors, even if that information is provided in a different context”, Brennan explained.

Congratulating Brennan on her win, Chartered Accountants Ireland President Austin Slattery said, “Expectations of company directors are increasing all the time. This article makes clear that no director should take on a directorship without understanding the risks involved.”