The key to success in business? ‘Handling rejection' 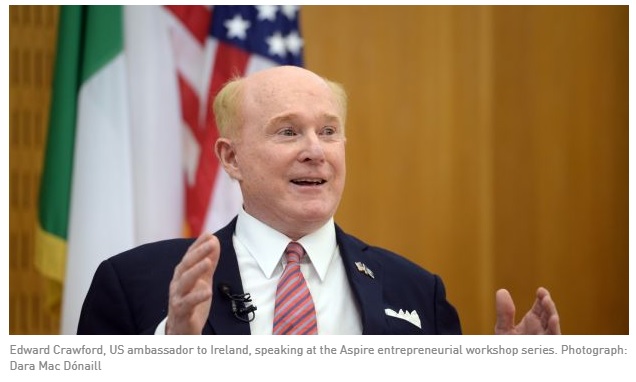 What’s the key to being a successful entrepreneur? Most people say risk-taking, but for Edward Crawford, an American businessman and recently appointed US ambassador to Ireland, it’s the ability to handle rejection.

“No matter where you are, there are always people saying no,” he told an event on entrepreneurship at the Smurfit Business School in Dublin yesterday.

Mr Crawford, whose grandparents were from Co Cork, is the epitome of a self-made man. He founded a successful company making paint cans in the 1960s but expanded too fast and was ousted by shareholders.

Bruised but not undone by the experience, he went on to establish the Crawford Group, a venture capital and management consulting firm. This was later sold to Park Ohio, an industrial holdings group with manufacturing assets in several sectors.

As a result of the transaction, Mr Crawford became the major shareholder in Park Ohio and later its chairman and chief executive. He went on to grow the company into a $2 billion business with 7,500 employees worldwide.

Early setbacks
He describes the various setbacks he faced in the early part of his career as “gifts” that propelled him to success. The theme of his speech, part of the school’s entrepreneurial workshop series, was “rejection is energy”.

“Well-meaning as they might be, people say no, no, no ... and it throws you off balance. You don’t feel so good, you don’t half feel as excited about yourself ... There’s a lot of doubt,” he said. “You have to learn to get past that, to turn it into energy,” the 81-year-old said.

Mr Crawford, a prominent Republican Party donor in the US, led the Ohio effort to raise money to elect Donald Trump as president and was named as the state party’s finance chairman in 2016.

He has a long history of philanthropy and entrepreneurship in Cleveland, Ohio, where he has been active for many years in the city’s Irish-American community.

Mr Crawford was appointed US ambassador to Ireland earlier this year. The position had been vacant since the departure of Kevin O’Malley, Barack Obama’s nominee, in January 2017.

This article was authored by Eoin Burke-Kennedy and published in the Irish Times on November 6, 2019