Ireland has exceeded the total amount of atmospheric ammonia it can produce under European law, 98% of which arises from agriculture. However, more important than this arbitrary threshold are the concentrations of ammonia in different parts of the country, which are linked with negative impacts on human health and the environment.

Through monitoring, modelling, mapping and other approaches, the AmmoniaN2K project, a joint initiative between UCD and the University of the West of England, has enhanced Ireland’s understanding of these impacts. The project is currently influencing national and international policy, ensuring compliance with EU Directives, and will ultimately benefit the environment and human health across both Ireland and Europe.

The AmmoniaN2K project carried out thefirst assessment of the impact of atmospheric ammonia concentrations on Irish “Natura 2000” sites (a European network of important, protected ecological sites). Dr Kelleghan and colleagues conducted this assessment by creating a map of Ireland that combines ammonia concentrations with the presence of so-called “indicator species”. These are specific species of lichen that can tell us about the effects of ammonia pollution on the environment.

These maps are a cost-effective way of identifying sensitive sites at risk from air pollution. This work highlighted that ammonia concentrations in as many as 80% of Natura 2000 sites exceed a level that potentially affects the environment. This shows the severity of an impact that was not adequately considered during Ireland’s agricultural expansion, under strategies for the sector such as Food Harvest 2020 and Food Wise 2025.

The AmmoniaN2K project generated several additional outputs. Among these is a way of identifying the locations of unlicensed intensive pig and poultry farms, which are hotspot sources of ammonia, providing Government bodies with the evidence needed to address the issue. Together, the project’s outputs create a national database of the risk posed to every Natura 2000 site in Ireland.

The project was funded by the Environmental Protection Agency (EPA). The primary output was a PhD thesis, accompanied by four peer reviewed publications (one published, three in preparation), and an EPA Research Report. This work was carried out in University College Dublin by PhD student David Kelleghan under Principal Investigator Dr Tom Curran, and co-supervised in the University of the West of England by Professor Enda Hayes and Associate Professor Dr Mark Everard.

The AmmoniaN2K project has advanced Ireland’s understanding of atmospheric ammonia emissions and their impacts, influencing national and international policy to protect the environment and improve health. 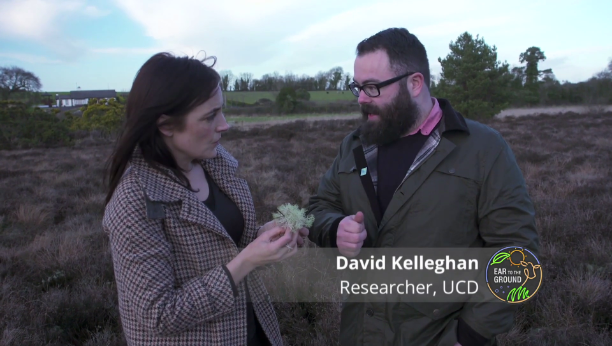 Because of the project’s success, numerous state bodies have requested presentations by Dr Kelleghan to inform future policy relating to managing ammonia emissions and impacts. These included workshops organised by the Food Wise 2025 Environmental Sustainability Committee, An Taisce, the EPA, and the Department of Communications, Climate Action and Environment (DCCAE).

Dr Kelleghan has also been asked by the DCCAE to represent Ireland at European Commission meetings around the National Emissions Ceilings Directive, which sets national emission reduction commitments for five important air pollutants, including ammonia.

In addition, the AmmoniaN2K group have advised the National Parks and Wildlife Service on an ongoing basis, to inform staff on how to appropriately deal with the development of new hotspot sources of ammonia. More recently, the National Parks and Wildlife Service sought advice from the team regarding ongoing legal proceedings in the Irish High Court around compliance of the environmental assessment of ammonia impacts under EU law.

At the request of the DCCAE, members of the team compiled the first submission to the European Commission for Ireland’s National Ecosystem Monitoring Network, required under the updated National Emissions Ceilings Directive. They have also scoped the design of Ireland’s first continuous national ammonia monitoring network on behalf of the Department of Agriculture, Food and Marine. Monitoring conducted by the project will help inform the reporting of national emissions to the European Commission, which is increasingly important as the amount of ammonia Ireland can legally produce decreases.

In 2017, the EPA awarded the project a cost extension, due to its value to Irish environmental regulation and protection. Identifying unlicensed intensive hotspot ammonia sources, as part of this extension, was of direct value to the consultancy AECOM, who were contracted by the EPA to identify unlicensed farming facilities large enough to require licensing. Without the methods developed by AmmoniaN2K, this would not have been possible. 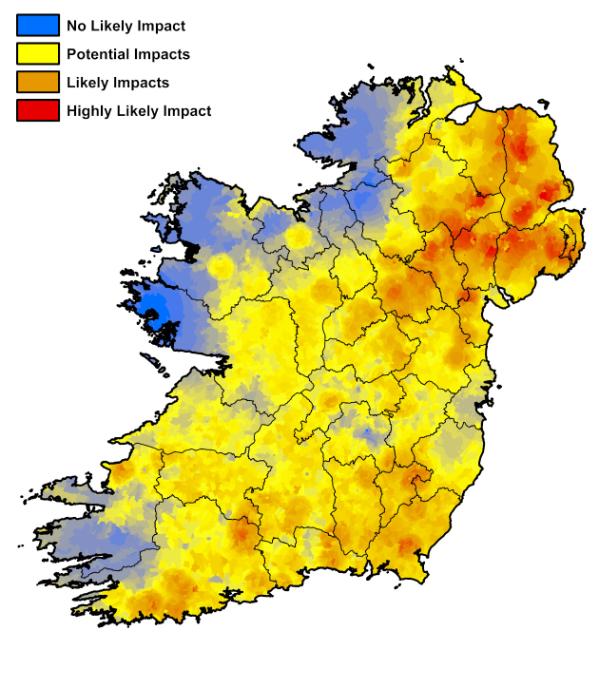 These research outputs have also benefited the MapEire project, which mapped different types of emissions across Ireland. This required a detailed knowledge of hotspot ammonia sources, which would have been otherwise unavailable.

The AmmoniaN2K project has linked with a European network known as “LivAge”, which aims to reduce emissions from animal production and housing, and will host a workshop in UCD in 2020. This is an opportunity to enhance the international impact of the project, highlighting the benefits of the project’s approach and how it can be applied in other European countries to ensure compliance with EU Directives.

The research has received a lot of public interest. The first paper published from this project is in the top 2.5% of all papers ever tracked by Altmetrics due to interest on Twitter, where it has been tweeted over 150 times reaching 130,000 twitter users. It has also garnered much media attention, with interviews conducted with Ear to the Ground (RTÉ), Costing the Earth (BBC), the Irish Times and the Guardian. This, combined with the numerous presentations requested, resulted in additional funding from the National Parks and Wildlife Service and the EPA.

Atmospheric ammonia poses a significant threat to biodiversity and human health around the world. High concentrations can result in changes to the structure of ecosystems, and the increase of unwanted species such as algal slimes. Additionally, ammonia reacts with other pollutants in the air to form so-called “particulate matter” that is harmful to humans when inhaled. Atmospheric particulate matter has been linked to a range of pulmonary and cardiac issues. Human health is particularly at risk due to agricultural expansion in Ireland. The outputs from this project will reduce these potential impacts by addressing gaps in existing assessment practices.