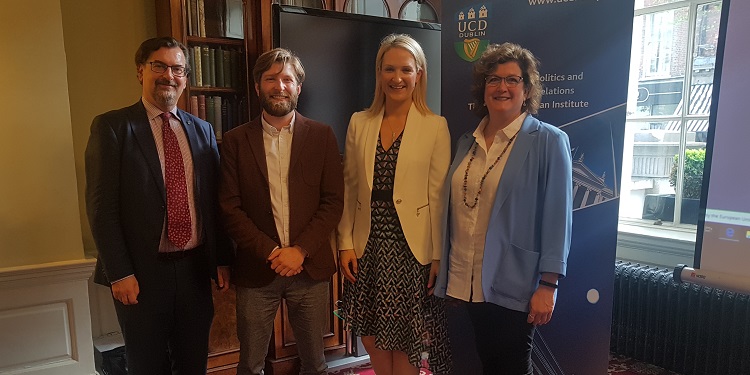 The Irish element of the EUandI2019 Voter Advice Application was launched by Minister of State  for European Affairs Helen McEntee on 2 May in the Royal Irish Academy on Dawson Street.

EUandI2019 is a new Voter Advice Application that helps citizens make informed choices in their 2019 European Parliament vote. It has been developed in collaboration with an international team of scholars including the European University Institute in Florence, Italy, and the University of Luzern, Switzerland. It is supported by the European Commission.

SPIRe's Dr James Cross is the team co-lead for the Irish contribution alongside Dr Maria Laura Sudulich of the University of Kent. Masters students in Dr Cross' Politics of European Governance module contributed to the big task of coding Irish political party policies for the app. In addition, the project forms part of an exercise in entrepreneurial education that Dr Cross undertook with UCD's Innovation Academy.

Available in 24 languages, EUandI2019 invites users to react to 22 policy statements covering a wide range of contemporary policy issues and political values in European politics. The app then provides voters with a clear view of the European electoral campaign and their individual positions within it, helping people identify which political parties represent their views.

Introducing the launch Principal of the College of Social Sciences and Law Professor Colin Scott said it was heartening to see this "democracy enhancing use of new media" at a time when the influence of digital technologies on voter behaviour can be contentious.

Minister McEntee spoke about the positive regard for the EU within Ireland particularly in the younger demographic brackets and the importance of encouraging all voters but especially younger voters to engage with the democratic process within Europe. She said, 'ensuring that Ireland is represented within the EU institutions is critical to being able to contribute to and gain from the European Union. The European Parliament provides a means for Irish people to ensure that their voice is represented in Europe. We all have the opportunity to choose who we want to see speaking on our behalf in the parliament and this opportunity is one that we should all use carefully and seriously.’

Dr Cross and student Marek Sustak gave a quick demonstration of the app and Kathleen Lonergan Erickson from the Innovation Academy closed the evening with some words about the tools and mindset they aim to foster at the academy. She commended the project as a great example of collaboration and innovation.