In the Dublin Political Theory Workshop we discuss work in progress in the area of policial theory widely understood including debates on applied ethics and social and legal philosophy. 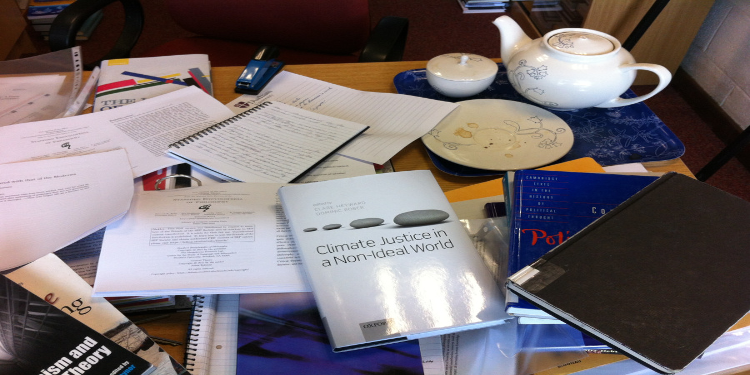 Unless stated otherwise all meeting currently happen on zoom. Please email alexa.zellentin@ucd.ie to register for the workshops or with any queries about the events.

The discourse on climate change mitigation is considerably focused on reducing greenhouse gases and adopting green technologies and other sustainable socio-economic practices. There is minimal reference to population reduction, especially how unrestricted population growth can exacerbate climate change concerns. The reticence to engage with population growth and its effect on climate change may be attributed to its intersection with our fundamental freedoms. The subject invades our collective privacy; it challenges our humanity because it reduces individuals into numbers that must be reduced or controlled. Consequently, the subject is primarily avoided or discussed in hushed tones, far away from mainstream discourses.

However, this subject cannot be avoided in perpetuity. The paper posits that it is morally reprehensible to be aware of the dangerous repercussions of unrestricted population growth and not act to forestall or mitigate the harm. Recognising that population growth is an integral part of the problem is the first step; adopting a population reduction policy is a potential solution. Thus, apart from justifying the morality of adopting a population reduction strategy, the paper also provides a morally sound strategy to implement population reduction policies. It proposes a hybrid of the Ability to Pay(APP) and Polluters Pay(PPP) Principles called the Utility Maximising Principle(UMP). The UMP departs from fault or blame as the basis for apportioning climate change mitigation responsibilities. Instead, it relies on a common and shared responsibility to safeguard our climate for current and future humans and animals.

The details of this workshop will be available soon.

Title: Edmund Burke, the Trans-Atlantic Slave Trade, and the Two Faces of Abolition

The publication of P.J. Marshall’s Edmund Burke and the British Empire in the West Indies (2019) has reignited controversy over Edmund Burke’s relationship to the transatlantic slave trade. This debate has centred on the Sketch for a Negro Code, a list of measures for reforming the slave trade that Burke drafted in 1780. For some, the Sketch not only demonstrates Burke’s sensitivity to slave suffering but also contains a plan for both abolition of the slave trade and of plantation slavery itself. More sceptical readers have drawn the opposite conclusion, suggesting that Burke aimed at perpetuating slavery by showing how it could be rendered more humane. In this paper I argue that making sense of Burke’s Sketch requires sharply distinguishing between abolition of the slave trade, on the one hand, and abolition of plantation slavery, on the other. Doing so allows us to see more clearly how Burke vacillated in relation to the former – retreating ultimately to gradualism and reform – while remaining more resolutely sceptical of the latter. Like other statesmen with abolitionist sympathies, it was critical for Burke that the termination of the slave trade did not have to bring an end to the use of slaves on plantations. To the extent that Burke was comfortable contemplating the end of the slave trade it was because he saw the trade’s abolition as compatible with the continued centrality of slavery to the West Indian plantation economy. Along with other trade abolitionists, Burke envisaged that slave populations could be reproduced without new imports from Africa through what William Wilberforce called “breeding and rearing,” or encouraging the already enslaved to have children. It is against the backdrop of these plans for the ‘natural’ reproduction of the slave population, I argue, that we should read Burke’s proposals for incentivizing slave marriage. I conclude by showing how attending to the two faces of abolition (abolition of the slave trade and abolition of plantation slavery) can guard against the teleological assumption that one form of abolition necessarily entailed the other.

Title: What kind of group is Antifa?

One of the highlights of the US 2020 first presidential debate was the one concerning Antifa. While Biden contended that Antifa is ‘an idea, not an organization’, Trump held the view that it ‘is a dangerous, radical group’. ‘When a bat hits you over the head, that’s not an idea’, he added. In this paper I offer an answer to the question regarding Antifa’s nature. First, I briefly outline the main characteristics of Antifa (section 1). Next, I review the philosophical underpinnings of the Trump-Biden discussion and identify its shortcomings in relation to this political phenomenon (section 2). Later, I draw upon the notion of personification of groups and develop an alternative theoretical framework (section 3). Specifically, I distinguish four axes of analysis: attribution; performativity; external personation; and autonomization. I then conclude that Antifa is a group, but that is mainly voiced and constructed as a collective person by external agents (section 4). Finally, I derive six insights that insiders and outsiders can infer from this approach to Antifa (section 5).

Title: What is Egalitarians’ Problem with Equality of Opportunity?

Full details of this workshop will be added soon.

Title: Nietzsche in Ireland’s battle of ideas before 1916

In the first two decades of the 20th century, across the island of Ireland, significant public engagement with the meaning and relevance of Nietzsche’s philosophy was increasingly evident in newspapers and public platforms. (For example, digital archives indicate approximately 200 Irish newspaper articles or letters to the editor that refer to Nietzsche during 1900-1920.) In part, this fascination with Nietzsche mirrored a transnational trend in the Anglophone world following the translation into English and wide distribution of Thus Spake Zarathustra in the early 1900s. In Ireland, exchanges became increasingly polarised in the politics of World War I propaganda, in which Nietzsche was cast solely as architect of “Prussian atrocity” and attacks on religion or, alternatively, his legacy was defended against anti-German (pro-British) slander. Nonetheless, the depth and nuance of engagement with Nietzsche during this time by leading and aspiring Irish public intellectuals, and the implication of this engagement in competing formulations of Irish nationalism and other visions of Ireland — past and future — is a significant phenomenon in the history of ideas that has yet to be explored. Framed in relation to a public panel organised to commemorate the centenary of Thomas Davis in Dublin, November 1914, which featured WB Yeats and TM Kettle (as well as the emerging Padraic Pearce), this paper examines Yeats’ and Kettle’s ideas about the philosophy of Nietzsche, places their opposing views in their respective political and philosophical contexts, and considers how each one’s interpretation of Nietzsche shaped their very different visions of Ireland to come.