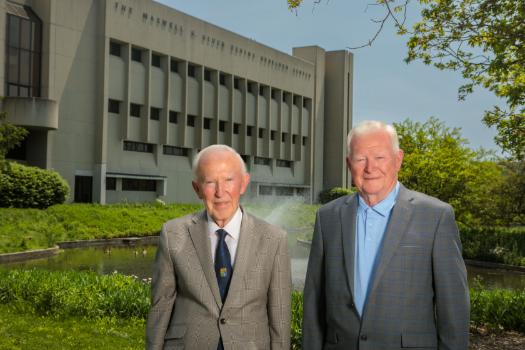 John F. Timoney was educated at University College Dublin and the University of Wiscon­sin, Madison where he graduated in science, veterinary medicine and immunobiology. He taught Veterinary Preventive Medicine and Public Health in Dublin from 1967 to 1972. He then moved to Cornell University where he succeeded Dr Dorsey Bruner with re­sponsibility for Veterinary Bacteriology and Mycology in the DVM curriculum from 1972 to 1991. Appointed Keeneland Chair of Infectious Diseases at the University of Kentucky in 1991, he retired from that position in June 2016.

He held a Fogarty International Fellowship at the Medical School at the University of Bristol from 1979 to 1980 and was visiting professor of veterinary bacteriology at the University of California School of Veterinary Medicine, Davis from 1985 to 1986. He has authored more than 200 scientific papers and book chapters and was co-author of the 7th and 8th editions of Hagan and Bruner's Microbiology and lnfectious Diseases of Domestic Animals (Cornell Press). He holds two patents in the fields of equine vaccinology and immunodiagnosis. Research interests have included antimicrobial resistance in the veterinary bacteria, salmonellosis, bacterial depuration in shellfish, immunopathology of arthritis, mucosal immunity, equine prevention streptococcal disease including strangles, leptospira abortion and uveitis and prevention of neonatal clostridial disease in the foal.

His research contributions have been recognized by awards including the Sir Frederick Smith Memorial Medal, Bayer Animal Health Excellence in Equine Research Award, Honorary Membership of the American College of Veterinary Microbiologists and DSc degree from the National University of Ireland for published work.

He has held appointments at the Irish Department of Agriculture Veterinary Research Laboratory at Abbotstown, Co Dublin, Cornell University, the Irish Equine Centre, and the University of Kentucky.

Dr Timoney has been a faculty member in the Department of Veterinary Science, University of Kentucky since 1983, with a speciality in equine infectious diseases, especially equine viral arteritis, contagious equine metritis, equine herpesviruses and equine encephalomyelitides. He has published extensively in the field and has participated in many national and international scientific and equine industry conferences.

Dr Timoney was Director of the Maxwell H. Gluck Equine Research Center from 1989 until 2008, and Chairman of the Department of Veterinary Science, University of Kentucky from 1989-1999 and 2002-2008.  Prior to his retirement, he was holder of the Frederick Van Lennep Endowed Chair in Equine Veterinary Science from 1988-2022.  Dr. Timoney is currently Professor Emeritus, University of Kentucky.