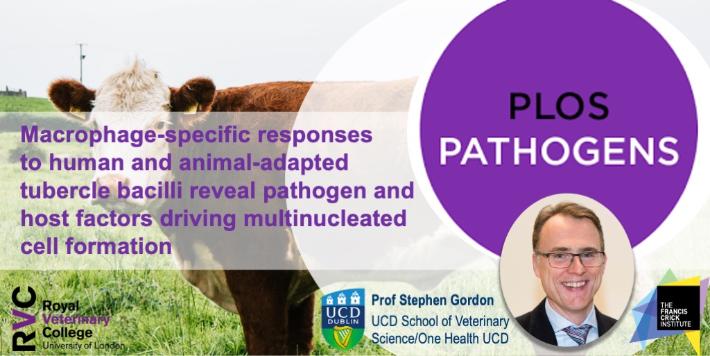 Professor Stephen Gordon and his research group are co-authors on the new paper which reveals a key disease mechanism of the bovine TB pathogen.

A multidisciplinary team led by The Francis Crick Institute and including researchers from University College Dublin, the Royal Veterinary College (RVC) and UK human and animal health agencies has shed new light on how the bacteria that cause tuberculosis (TB) in humans and animals manipulate the host immune system to cause disease.

Professor in Infection Biology at UCD Schools of Veterinary Medicine, Professor Stephen Gordon and his research group are co-authors on the new paper which reveals a key disease mechanism of the bovine TB pathogen.

The work, published in leading scientific journal PLoS Pathogens, has powerful implications for understanding how pathogens ‘jump’ the species barrier and adapt to new hosts. It also highlights the power of ‘One Health’ approaches that employ comparative studies of human and animal pathogens to decipher disease mechanisms.

Professor Stephen Gordon, who is also the ‘One Health’ theme lead at UCD, said: "We have used a One Health approach to compare the human and animal TB pathogens, shedding new light on how these pathogens cause disease and opening new hope for ultimate control of TB in both humans and animals.”

TB is a devastating disease in humans and animals. Human TB, caused by Mycobacterium tuberculosis, kills more than 1.4 million people a year, while the animal TB pathogen Mycobacterium bovis is a threat to the health and welfare of domesticated and wild animals.

The current bovine TB control programme in Ireland aims to eradicate the disease by 2030. While bovine TB here is low relative to historical levels, animals identified as TB reactors and herd incidence have been increasing since 2016, with this trend accelerating in 2020. Data indicates that 4.37% of Irish cattle herds had a bovine TB breakdown in 2020, and 23,055 cattle were detected as reactors. This in turn leads to increased costs, with the bovine TB programme costing almost €100 million in 2020.

M. bovis is also a risk to human health due to the transmission of infection from animals, especially for people with closer animal-human interaction or in immunosuppressed people. However, it is still unknown how M. tuberculosis and M. bovis have evolved to adapt to their respective human and animal hosts.

Supported through a variety of funders including Science Foundation Ireland, Wellcome Trust, Cancer Research UK, the Francis Crick Institute and RVC, the researchers studied over the last three years how the bovine and human pathogens interact with macrophage cells of the immune system – the cells that target harmful intruders such as bacteria.

They discovered that only the infection of bovine macrophages with M. bovis resulted in the formation of multinucleated giant cells (MNGCs), a hallmark of tuberculous pathology. They then identified a specific protein of M. bovis, MPB70, and particles from bovine macrophages as facilitators of MNGC formation.

The study also reveals how a combination of bacterial factors and species-specific immune responses shapes the unique interaction of the pathogen with its host.

The ‘One Health’ approach considers what is optimal health for humans, animals and the environment in a holistic way. UCD is in a unique position to deliver the ‘One Health’ vision through its integrated College of Health and Agricultural Sciences, which includes Ireland’s only university school of veterinary medicine.

Professor Gordon’s research focus on the human pathogen M. tuberculosis and the bovine pathogen M. bovis aims to define how these bacteria cause disease and to translate this to improved control tools to combat TB in both humans and animals.

The full paper is available from PLOS Pathogens and can be accessed here.