The opening address at the Conference was delivered by Michael Creed, TD, Minister for Agriculture, Food & the Marine, and speakers included Mike Magan, AHI Chairman, Dr David Graham, AHI CEO and Dr Vytenis Andriukaitis, EU Commissioner on Health and Food Safety.  The UCD School of Veterinary Medicine was represented by the Dean, Professor Michael Doherty who is actively involved, along with colleagues in the UCD Herd Health Group, in the promotion, development and implementation of herd health in Ireland.  Professor Doherty spoke on 'Why the need for AHI?, stating that the establishment of AHI provided a much-needed coherent and coordinated approach to non-regulatory bovine health at both herd and national levels.  [Pictured below at the AHI 10th Anniversary Conference (l to r): Mike Magan, Michael Doherty, David Graham, Simon More (UCD) and Martin Blake (DAFM)] 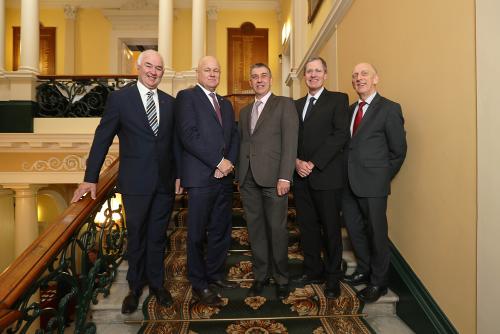 David Graham spoke of the considerable change in the industry over the past decade, 'with the emergence of new opportunities and challenges. AHI was established in 2009 as a result of the commitment of those involved in the Irish agricultural industry and DAFM to work together with a common goal to address non-regulated animal health issues in Ireland.  To date, the work of AHI across all its animal health programmes has provided increased income to Irish farmers and industry, lowered our carbon emissions and reduced the use of antibiotics with improved animal health.'  Looking forward to the next decade of their work, Dr Graham stated that 'AHI has already started the process of engagement with primary producers and stakeholders, to identify and address additional priority work areas for AHI in the dairy and beef sectors.  We have recently appointed a programme manager to oversee a new Pig HealthCheck programme and are also beginning some limited activities in the poultry sector, focusing on biosecurity assessments in broiler and layer flocks.'

Animal Health Ireland was established in 2009 by Minister for Agriculture, Fisheries and Food, Brendan Smith TD. This reflected a commitment on behalf of various stakeholders within the agri-food sector, including primary producers and their representative organisations, food processors and service providers to work together in pursuit of co-ordinated programmes addressing non-regulated animal health issues.  AHI's work is focused on contributing to a profitable and sustainable farming and agri-food sector through improved animal health.