Nicole Rosenberger and Tan Zhi Hao, both Stage 5 MVB students from the UCD School of Veterinary Medicine, represented UCD at the 19th Congress of the International Federation of Associations of Anatomists (IFAA) in London in August 2019; the conference was hosted by the Anatomical Society. Nicole and Zhi Hao were the only two representatives from the School to present at the conference, with five posters also accepted from the School. Nicole and Zhi Hao's poster (pictured) was featured on the second day of the conference, and was entitled: Incidence of orthopaedic conditions: A Radiographic study of Feline patients at UCD Veterinary Hospital. 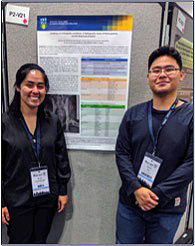 Their project aimed to investigate the prevalence and types of orthopaedic conditions commonly seen in feline patients, with the caseload population targeted at the Dublin area. The history and radiographical findings from a total of 110 feline patients diagnosed with orthopaedic conditions were collected from the UCDVH database (kindly provided by Dr Seamus Hoey) by both students and the data analysis was done by Dr Arun Kumar and Dr David Kilroy from the Veterinary Biosciences section.

Given that the predominant breed isolated from the population was the Domestic Short Hair/Long Hair, this project will be continued this winter with the aim of expanding the sample size in hopes that a greater variety of breeds can be incorporated. End goals for the project are to write a paper for journal submission, and hopefully the project findings may be useful to those particularly interested in feline medicine, or for use in clinical teaching. 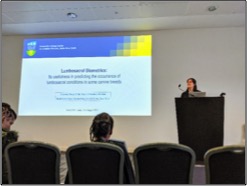 Nicole also gave an oral presentation on her project entitled: Lumbosacral biometrics and its usefulness in predicting the occurrence of lumbosacral conditions in some Canine breeds.  Her project was featured in the 'Free Oral Communications – Tissue Engineering/Clinical and Surgical Anatomy/Veterinary and Comparative Anatomy' session. This project was an extension of a previous study conducted last Autumn, which aimed to investigate canine-breed specific biometrics of the lumbosacral anatomy using a radiographic and dissection-based approach.

The findings from the first study were used in this project to determine whether a relationship existed between each of the biometric parameters devised and the occurrence of lumbosacral conditions in the study population. From the first study, two biometric parameters of the lumbosacral region (L7 and the fused sacrum) were devised (i.e. Height-Length ratio and Area-Mean ratio) and are measures of the available surface area of the bone and relative bone density respectively. The findings from the first study were published this year, and further information can be obtained at the following link: DOI - 10.5530/bems.5.1.2 The data for this study was collected by Nicole and Erica De Capitani (who graduated this summer) and was similarly analysed by Dr Arun Kumar.

A third phase of the project will look at investigating a possible relationship between a high Body Condition score and the occurrence of lumbosacral conditions in the 10 canine breeds in the study.

Congratulations to Nicole, Zhi Hao and everyone involved in these projects!