Genetic Test for Muscular Dystrophy in the Japanese Spitz 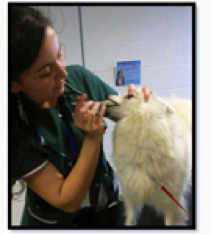 Registration certificates, pedigrees and microchip numbers are recorded and collected together with oral saliva swabs from Japanese Spitz dogs. Once saliva is collected and shipped to UCD, the DNA is then extracted and PCR amplification of the DNA is carried out using specific primers for the mutation.

‌Since 1998, a total of 17 affected male Japanese Spitz have been examined at UCD.  All but two were less than 18 months old at the time of diagnosis.  These animals had severe disease and all were eventually euthanased. The remaining two dogs were 3 and 6 years old.  The latter dog died at 8 years of age and was considered to have a milder form of the disease than usually seen.  This dog was thought to be relatively normal for some years and had even sired several litters of puppies.  This exemplifies that affected animals and not just carrier females are capable of perpetuating the abnormality in their offspring.

To date, over 100 Japanese Spitz have been tested mostly emanating from Ireland but also from Finland and the UK.  Five carrier females have been identified thus far, all of which have been of Irish origin.

Relevance of identification of affected and carrier animals‌

There is no cure for muscular dystrophy and therefore prevention of the disease, by removing affected and carrier animals from the breeding population, is the best strategy for eliminating the disease from the breed. It is highly recommended that all dogs found to have passed on this trait, or to have been identified as affected or carriers by the genetic test, should be spayed or neutered to prevent its further transmission.

To test a dog:

Contact vethospital@ucd.ie  Please mark your email for the attention of Robert Shiel or Carmel Mooney.

An oral swab will be forwarded to you with instructions together with a form for animal details.