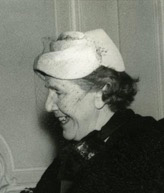 McNEILL, Josephine (1895–1969), diplomat, was born 31 March 1895 in Fermoy, County Cork, daughter of James Ahearne, shopkeeper and hotelier, and Ellen Ahearne (née O’Brien). She was educated at Loretto Convent, Fermoy, and UCD (BA, HDipEd). With a BA in French and German she began a teaching career, teaching at St Louis’ Convent, Kiltimagh, at the Ursuline Convent, Thurles, and at Scoil Íde, the female counterpart of St Enda’s, established by her friend Louise Gavan Duffy (qv). A fluent Irish-speaker with an interest in Irish language, music, and literature, she took an active part in the cultural side of the Irish independence movement. She was also a member of Cumann na mBan and in 1921 a member of the executive committee of that organisation. She was engaged to Pierce McCann, who died of influenza in Gloucester jail (March 1919). In 1923 she married James McNeill, Irish high commissioner in London 1923-8. Josephine McNeill took reluctantly to diplomatic life, but it never showed in public. Her charm and intelligence were immediately apparent, and in a period when Joseph Walshe (qv), the secretary of the Department of External Affairs, viewed married diplomats and diplomatic wives with disdain, McNeill was a noted hostess, both in London and later in Dublin, where James McNeill was governor general of the Irish Free State (1928–32). A paragraph in her obituary in the Irish Times sought to separate the real McNeill from her official persona. The ‘immediate impression she gave was of a very mannered woman of the world’; but this was a mask which ‘concealed very considerable shyness as well as a protean nature. This apparently conventional woman, with the air of a hostess in a Pinero play, was an adventurous and romantic spirit. Possibly those who knew her in her Cumann na mBan days got nearer to the real woman than later acquaintances, when she had become an official hostess.’ Due to her position as the wife of the governor general, she ‘suppressed the rebel and produced the public servant.’

Josephine McNeill greatly resented the manner in which her husband was treated by Fianna Fáil when they suppressed the office of the governor general in 1932; yet, when minister to Switzerland later in her career, she put aside all differences with Eamon de Valera, who was in the country for an eye operation, and went to sit with him during his convalescence.

After James McNeill’s death (1938), Josephine McNeill became honorary secretary of the council of the Friends of the National Collections and acted as chairman of the executive committee of the Irish Countrywomen’s Association to 1950. She wrote on social, cultural, and economic issues, was a member of the Department of External Affairs advisory committee on cultural relations, and represented Ireland at the general assembly of UNESCO at Paris in 1949.

The foundation of Clann na Poblachta gave McNeill a new lease of life and she embraced working for the party with the enthusiasm of her Cumann na mBan days. In 1950 she was appointed minister to the Netherlands by the party leader, Seán MacBride, minister for external affairs in the inter-party government in 1950. She thus became Ireland’s first female diplomat to be appointed in a ministerial capacity to represent the Irish state abroad. However, the career diplomats in the Department of External Affairs looked on this overtly political appointment poorly. McNeill’s reports to Dublin from The Hague paid particular attention to the problems of Dutch decolonisation. She was appointed minister to Sweden in 1955 and held a joint appointment to Switzerland and Austria (1956–60), when she retired from public life. She was a collector of porcelains and paintings and an amateur pianist, and in 1933 publishedFinnsgéalta ó India. Her Irish Times obituary considered that ‘there were several Josephines, the rebel who became a servant of her people, the musician, the art lover (she had real taste), the practical enthusiast, the feminist. All held under by a restraint which was misleading, because it suggested too much a concern for social activity.’ Yet it concluded that ‘she did more than any three or four women usually achieve. And yet she left the impression of one whose full potential—perhaps from unconquerable shyness—was never fully realised.’

This collection was deposited in UCD Archives by Mr Gerard Hearne in October 2008.

Correspondence mainly to Josephine McNeill and generally personal in nature, reflecting her interest in the arts. Correspondents include W.B. Yeats, George Bernard Shaw, Kate O’Brien, Elizabeth Bowen, Mícheál MacLiammóir, Lady Augusta Gregory, Seán O’Casey and William Orpen. Other letters, routine in content, reflect her role as a diplomatic spouse particularly during the period 1928–32 while at the Vice Regal Lodge. There are only scant references to her own diplomatic appointments and the collection contains no official correspondence relating to her diplomatic career.

Certificates awarded to Josephine McNeill, press cuttings and published material including a book of Indian children’s stories that she translated into Irish, Finnsgéalta ó India, 1932. Transcripts of addresses delivered at functions; a copy of the minutes of a meeting of the Advisory Committee on Cultural Relations in the Department of External Affairs.

Material relating to James McNeill, notably a file of correspondence between McNeill and the Press Censor’s Office, concerning permission to publish his letter to the Right Honorable Henry Edward Duke, Chief Secretary of Ireland, in which he protests against the trial and imprisonment of his brother, Eoin MacNeill in 1916. Also a file of correspondence between McNeill, de Valera and Sir Clive Wigram concerning the crisis that resulted in McNeill’s early resignation from the post of Governor-General in 1932.