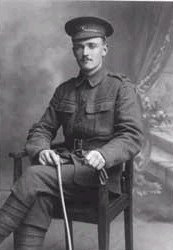 Born on 3 February 1891, the eldest son of Maurice and Mary Moynihan, he was educated at the Christian Brothers’ School in Tralee where he won many academic prizes and awards. In 1908 he went to Dublin to study at what subsequently became University College Dublin, one of the constituent colleges of the new National University of Ireland. He won a number of major scholarships and exhibitions and in January 1910, after successfully sitting the competitive exams for the Inland Revenue, he joined the civil service. He worked in Dublin until 1913 when he was promoted and moved to the Inland Revenue offices at Croydon, near London.

In March 1914 he joined the Civil Service Rifles, a unit of the British Territorial Army. When war broke out, he remained with this unit and did not return to the civil service. As a territorial unit, the Civil Service Rifles were restricted to home duties within the United Kingdom. But in 1916 Moynihan decided to sign up for foreign service despite his mother’s opposition; and he went to France at the end of June 1916 as a private in the London Regiment.

In 1917 he received a commission as a second lieutenant and joined the 8th (Irish) Battalion of the King’s Liverpool Regiment which was fighting in north-east France around Ypres. He was killed on 3 June 1918 and is buried in Doullens cemetery, just north of Amiens. His father had died just six months before him, in January 1918. Michael Moynihan was survived by his mother Mary, his younger brothers John (to whom he was especially close), Maurice, Denis, Thomas, and by his sister Johanna.

This collection was deposited in UCD Archives by Dr Maurice Monynihan, Michael's brother, in April 1994. It was initially part of a larger collection which consisted mainly of paper of Dr Maurice Moynihan himself, and included a small amount of material relating to another brother, Seán. Michael's papers were felt to be sufficiently distinct in terms of provenance, date and subject matter to be accessioned and processed separately.

Documents relating to his education in Tralee, County Kerry and University College Dublin, 1909–10; to his employment as a Surveyor of Taxes with the Inland Revenue Department in Dublin and London, 1909–16; and to his military service and death in the trenches, 1914–18. Consists mainly of correspondence with his mother concerning family matters; and correspondence with his brother Sean on a wide range of topics including life in Dublin and London, political events in Ireland, Britain and Europe, his military training, the progress of the war and life at the front.