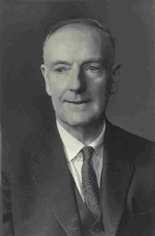 Born into a Tralee family with a lengthy pedigree of political commitment to the independence movement, Seán and Maurice Moynihan's careers were closely intertwined with that of Eamon de Valera, particularly after 1932. Seán had been a member of the Irish Volunteers and was interned after the Treaty for taking the anti-Treaty side. Maurice took the contrary position of joining the Civil Service of the Irish Free State through the first competitive examinations held in 1925. Sean was working for Mr de Valera by the late 1920s and accompanied him to the United States in 1929 on a fund-raising tour to help finance a Fianna Fáil newspaper. After Fianna Fáil's success in the 1932 general election, Seán was appointed secretary to the Executive Council of which Mr de Valera was President; while Maurice was seconded briefly from the Department of Finance to act as Mr de Valera's private secretary and accompanied him to London for talks with the British Prime Minister, Ramsay MacDonald, in that capacity.

Maurice returned to Finance later in 1932 but was again seconded to the President's Department in 1936 and was deeply involved in the preparation of the new Constitution. He was appointed Secretary to the Department of the Taoiseach in 1937 and held the post until 1960 when he left to become Governor of the Central Bank. As Secretary of the Taoiseach's Department he was also Secretary to the Government and, during the periods of Mr de Valera's tenure of the position, Private Secretary to the Taoiseach. It is an example of how highly they were regarded by de Valera that, when he went to Utrecht in 1952 for one of a long series of eye operations, he was accompanied by Seán Moynihan who corresponded with his brother as Secretary to the Government, informing him of the Taoiseach's progress and acting as a conduit between the two men for official purposes. Seán retired from public life in 1952. Maurice served as Governor of the Central Bank of Ireland, 1961–69, and enjoyed a productive retirement, writing Currency and Central Banking in Ireland, 1922–60 (1975), and editing the authoritative Speeches and Statements by Eamon de Valera, 1917–73 (1980).

This collection was deposited in UCD Archives in April 1994 by Dr Maurice Moynihan. The collection originally consisted of papers belonging to the three Moynihan brothers; Séan, Maurice and their elder brother Michael. But Michael's Papers (P57) were felt to be sufficiently distinct enough to be accessioned and processed seperately.

Diaries and notebooks of Muiris Ó Muimhneacháin, 1937–55, mainly concerning Government business. Papers relating to his research and writing, 1971–87, including unpublished research on the drafting of the 1937 Constitution. Biographical papers concerning Eamon de Valera, 1950–82