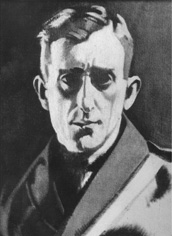 Richard James Mulcahy was born in Waterford and educated by the Christian Brothers both there, and later in Thurles where his father was postmaster. He joined the post office and was employed initially at Bantry, transferring to the engineering department in Wexford and from there to Dublin. A member of the Irish Republican Brotherhood and the Irish Volunteers, he fought with Thomas Ashe in Ashbourne during Easter 1916, was imprisoned at Frongoch, and released in the general amnesty in 1917. Chief of Staff of the IRA, he was elected MP for the Clontarf Division in 1918 and served as Minister for Defence in the First Dáil until April 1919. He supported the Treaty and served as Minister for National Defence in the Second Dáil and Provisional Government and succeeded Michael Collins as Commander in Chief of the Army after his death. He exercised primary responsibility for the conduct of the Civil War campaign against anti-Treaty forces but resigned from the Cabinet during the army crisis of 1924. He re-entered government as Minister for Local Government in June 1927.

After the resignation of W.T. Cosgrave in June 1944 Mulcahy was elected leader of Fine Gael. He stood aside to allow John A. Costello to form the First and Second Inter-Party Governments and served as Minister for Education in both (1948–51, 1954–57) and as Minister for the Gaeltacht (July–October 1956). He resigned from the leadership of Fine Gael in 1959 and from the Dáil in 1961.

He married Josephine (‘Min’) Ryan, a sister of Dr James Ryan and of Phyllis Ryan, wife of Sean T. O’Kelly, in 1919. They had three sons and three daughters.

This collection was transferred to UCD Archives following the establishment of the Mulcahy Trust in December 1970 to make permanent arrangements for the disposition of the Mulcahy Papers.

Minister for Local Government and Public Health (1927–32): departmental reports and memoranda, and minutes of the Executive Council.

Proceedings of the Defence Conference and correspondence concerning aspects of government and defence policy during the Emergency (1939–45).

Minister for Education in the First Inter-Party Government (1948–51): departmental reports and memoranda on education policy and issues.

Research notes, transcripts of tape-recorded conversations, and printed matter concerning the period 1914–24 and the need for re-evaluation; extensive notes on the text of Piaras Béaslaí’s Michael Collins; outline and draft chapters of an autobiography. Military and political pamphlets. Notes and printed matter relating to the Irish language.