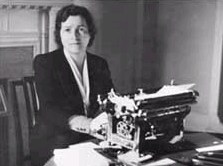 Born in Caherdaniel, County Kerry, in October 1888, into a family with strong nationalist credentials, Kathleen O’Connell emigrated to the United States in 1904. She had worked for some years as secretary to the Gaelic League in the USA and been active in Irish-American organisations generally before being seconded to the staff of Eamon de Valera's American tour in October 1919. She returned to Ireland with him in 1920 and acted as his personal secretary until her death in 1956.

This collection was deposited in the Franciscan Library Killiney by Miss O’Connell’s niece, Miss Marie Ní Cheallaigh. It was subsequently transferred to UCD Archives in July 1997 as part of the OFM-UCD partnership agreement.

Correspondence and other papers concerning Kathleen O’Connell’s role as private secretary to Eamon de Valera, mainly letters from him while in prison during the Civil War or abroad for various purposes: on publicity and fund-raising trips to the USA, 1927, 1929–30; in Geneva for the General Assembly of the League of Nations, 1935, 1938; on his anti-Partition round-the-world tour with Frank Aiken, March–June 1948; at the Council of Europe in Strasbourg, 1949, 1950; on a pilgrimage to the Holy Land, 1950; and while in Geneva and later Utrecht for treatment and surgery due to his increasingly problematic eye condition, 1936, 1951, 1952. Diaries and journals, memoirs and memorabilia, press cuttings and photographs.