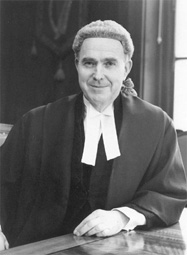 Born in Bray, County Wicklow, educated at Synge Street Christian Brothers and UCD graduating in Celtic Studies, he was called to the Bar in 1934 as well as serving as Irish language editor of the Irish Press from its foundation in 1931. Made Senior Counsel in 1945; served as Attorney-General in two Fianna Fáil governments, 1946–48 and 1951–53; judge of the Supreme Court, 1953 and Chief Justice 1961.

He became Ireland’s representative to the European Court on the country’s accession to the EEC in 1972 but returned to become President of Ireland in 1974 after the sudden death of Erskine Childers. He resigned in controversial circumstances in 1976 after the Minister for Defence publicly criticised his action in referring an emergency powers bill to the Supreme Court to test its constitutionality.

An immensely cultured man, his influence as a member of the Supreme Court and as Chief Justice, in developing the profile of the Court as guardian of constitutional rights, was significant.

This collection was donated to UCD Archives by Bean Uí Dálaigh, wife of Cearbhall Ó Dálaigh, in two parts. The first on 26 September 1980 and the second on 24 April 1981.

Papers relating to his legal career including his appointment as Attorney General (1946–8) and his involvement in the drafting of the British Nationality Bill (1947); his membership of the Supreme Court (1953–61) and period as Chief Justice (1961–73) with correspondence relating to procedural matters, individual judgements, and proposed amendments to the rules on insanity and the introduction of the concept of diminished responsibility (1955–69); the provision of training for the legal profession (1962–73); and his appointment as Irish representative at the European Court of Justice (1972–4).

Material concerning his nomination and inauguration as President of Ireland (1974) and his attendance at literary, artistic, cultural and public occasions, with copies of speeches and related notes (1974–6) and correspondence with members of the public. Material relating to official visits to France, Luxembourg and Belgium (1975). Correspondence and statements concerning the kidnapping of Dr Tiede Herrema (1975). Correspondence, memoranda and notes concerning the constitutionality of the Emergency Powers Bill (1976) and submissions to the Supreme Court. Correspondence relating to his resignation (1976) and notes on the failure of the Taoiseach, Liam Cosgrave, to keep him properly informed. Correspondence with P. Donegan, Minister for Defence. Letters from supporters.