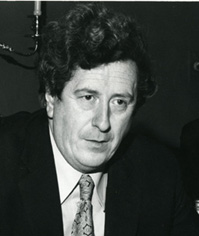 Born in 1926, the fourth son of Desmond FitzGerald‌, a veteran of the 1916 rebellion who served as Minister for External Affairs and Minister for Defence in the first post-independence Irish governments, a poet, philosopher and friend of Ezra Pound, and Mabel FitzGerald‌ [née McConnell] a Belfast Presbyterian who acted for periods as secretary to George Bernard Shaw and George Moore.

Educated at Belvedere and UCD where he took a double first in History and French and met his future wife, Joan O’Farrell. He was called to the Bar in 1947 but never practiced, taking up employment at the beginning of that year with Aer Lingus where he was involved centrally in the development of the national airline. He also developed a profile in journalism, writing and lecturing on economic matters in particular.

By early 1958 he had left Aer Lingus to pursue a career as an economic journalist, lecturer and consultant, acting at various times over the next fifteen years as inter alia the Financial Times correspondent in Dublin, a lecturer in economics in University College Dublin, a weekly columnist for the Irish Times, representative in Dublin of the BBC and the Economist, and economic consultant to a wide variety of state and private enterprises. He also developed strong relationships with the European Community and was an unequivocal advocate for Irish membership, chairing the Irish Council of the European Movement from 1959 to 1963.

Elected to the Seanad in 1965, he was appointed to the Fine Gael Front Bench by Liam Cosgrave. On the retirement from Dáil Éireann of John A. Costello he was selected with Fergus O’Brien as a Fine Gael candidate in the Dublin South-East constituency where he topped the poll. He was appointed Opposition Spokesman on Education and subsequently on Finance. With the change of Government in 1973, he was appointed Minister for External Affairs in the National Coalition Government, a post his father had held fifty years previously.

Besides his strong European inclinations, he had a sustained interest in Northern Ireland, spending the day before his appointment as Minister in Belfast. He was to break with precedent during his tenure as Minister for Foreign Affairs by visiting Northern Ireland regularly; as did senior members of his Department to meet and build relationships with representatives of all political and social groups. The rejection by extreme loyalism of the Tripartite Agreement negotiated at Sunningdale in December 1973, and of the concepts of power-sharing and an all-Ireland dimension at the heart of that agreement, was possibly the most disappointing aspect of FitzGerald’s period in Foreign Affairs but was more than counterbalanced by the outstanding success of Ireland’s first Presidency of the Council of the European Communities in the first half of 1975.

FitzGerald succeeded Liam Cosgrave as leader of Fine Gael after the defeat of the National Coalition in the 1977 general election. His success in rejuvenating and reorganizing the party and in introducing a new generation of TDs such as John Bruton, Alan Dukes, Ivan Yates, and Gemma Hussey, was unprecedented. After the general election of November 1982 Fine Gael held only five seats less than Fianna Fáil, while the party in the Oireachtas was actually larger.

His first period as Taoiseach was as leader of a minority government between June 1981 and January 1982, a period of extreme economic crisis. It was on a Dáil vote on John Bruton’s second budget in January 1982 that the government fell. The events surrounding the dissolution of the Dáil are now best remembered for the approaches to President Patrick Hillery by members of Fianna Fáil that were to have such a detrimental effect on the presidential aspirations of Brian Lenihan in 1990.

A third general election, in November 1982, resulted in FitzGerald being returned for a second term as Taoiseach, heading a Fine Gael-Labour coalition with a working majority. The effectiveness of this government was significantly hampered by the depth of the country’s economic problems. While Fine Gael wished to pursue a policy of fiscal rectitude to control public spending and reduce the budget deficit, the Labour Party was opposed to any diminution of public services. The negotiation of the Anglo-Irish Agreement in November 1985 was a considerable achievement but failures to achieve advances in the secularization of Irish society were a disappointment, most tellingly the defeat of the constitutional referendum to allow for divorce. The Labour Party withdrew from government on economic issues in January 1987 and Fine Gael were defeated in the subsequent general election. FitzGerald resigned as party leader, to be replaced by Alan Dukes. He retired as a public representative in 1992. He served as Chancellor of the National University of Ireland from 1997 until 2009.

The first tranche of this collection to be transferred to UCD Archives was the ministerial correspondence from his period in Foreign Affairs. This occured as a result of an offer from the then Director of Archives to provide secure storage for ministerial papers for members of the outgoing government in 1977. Further signifigant accessions were made after his resignation from the leadership of Fine Gael in 1987.

Papers relating to Garret FitzGerald’s tenure as Minister for Foreign Affairs, 1973–77 including:

Northern Ireland: preparations for the Tripartite Conference at Sunningdale, December 1973; Conference proceedings, the implementation of the Agreement; post-Sunningdale developments including the Northern Ireland Constitutional Convention. Much material on contacts between the Department of Foreign Affairs and political and community representatives in Northern Ireland.

European Communities: the impact of EC policies including regional development, agricultural, and fisheries policies on Ireland; EC enlargement; direct elections to the European parliament; the Tindemans Report; functioning and reform of the EC; British membership and re-negotiation; the Convention of Lomé; the Irish Presidency of the Council.

Ministerial meetings: briefing documents and reports relating to the Minister’s meetings both at home and abroad and including the Council of Ministers of the EC, European Summit meetings, the United Nations General Assembly, the Organisation for European Cooperation and Development [OECD], and the Bilderberg Conference.

Communications with Ambassadors. Material relating to protocol; to development aid; and to membership of the UN including participation in peacekeeping contingents.

Ministerial correspondence and copies of speeches