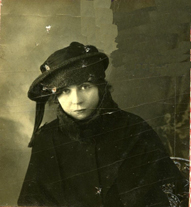 Born in Dublin on 19 October 1896 at 8 Fleet Street, Kathleen Barry Moloney was the eldest of seven children. Her parents Thomas and Mary (née Dowling) and her aunt Judith ran a prosperous dairy that included an eighty-six acre holding at Tombeagh, Hacketstown County Carlow and a retail outlet below the family home in Fleet Street. When Thomas Barry died in 1908 the Barry family found themselves split between their homes in Dublin and at Tombeagh. The Barry family were staunch republicans, in particular the older Barry Children. One brother, Michael, was active in the Carlow Brigade and the girls, particularly Kathleen, in Cumann na mBan. She joined the university branch of Cumann na mBan in 1920 and was close to the most senior republicans including Michael Collins‌, Austin Stack,Richard Mulcahy‌ and Eamon de Valera‌ throughout the 1920–24 period. She opposed the Treaty.

In April 1922 she was asked by de Valera to accompany Countess Markievicz as a member of a republican delegation which travelled to the USA. Shortly after her return the civil war started and she, along with Mary MacSwiney and Linda Kearns, remained in the Hammam Hotel in O’Connell Street during the week-long siege that ended in the death of Cathal Brugha. Between June and October 1922 Kathleen organised and maintained a line of communication between Dublin and General Liam Lynch in the South. In December 1922 she was asked to reorganise the Irish Republican Prisoner’s Dependents Fund (IRPDF) and acted as general secretary of the fund until September 1924. She was asked to travel to Australia with Linda Kearns in September 1924 on behalf of the Reconstruction Committee of the IRPDF to raise funds to provide financial aid to released prisoners. Shortly before her departure Kathleen married Jim Moloney in Westland Row church. She returned to Ireland in April 1925 and effectively retired from political activity, settling into married life and raising her growing family.

Jim Moloney, a native of Tipperary was born in January 1896. Son of a chemist, P.J. Moloney, the family owned a medical hall in Tipperary. During his service with the IRA, Jim held the rank of Battalion Adjutant, 3 Tipperary Brigade; Divisional IO, 2 Southern Division; Command IO, Southern Command; and Director of Communications on Liam Lynch’s staff. He was arrested in the Glen of Aherlow, along with his brother Con (Adjutant General of the anti-treaty forces during the civil war) on 7 March 1923 and imprisoned in Limerick. He was subsequently moved to Newbridge and Harepark internment camps. He acted as OC in Newbridge Camp and went on hunger strike over five weeks in the autumn of 1923.

Jim Moloney trained as a chemist in Dublin and although it was intended that he take over the family business in Tipperary, circumstances changed and Jim struggled to establish himself in full time employment until 1934 when he got a position in the Irish Sugar Company in Carlow. Jim and Kathleen had five children, twin girls, Helen and Mary, Patrick, Katherine (who married the poet Patrick Kavanagh) and Judy. From around 1930 Kathleen began working as Sales Publicity Advisor with the Electricity Supply Board (ESB) and was employed there until the 1950s when she retired due to ill health. During her time with the ESB Kathleen became a very active member of the union, the ATGWU, and various staff committees, once again displaying enormous energy and resourcefulness in campaigning for equality and workers rights on behalf of staff in the ESB. Kathleen remained a committed republican throughout her life, campaigning against the executions of republican prisoners between 1939 and 1947. She also acted as committee member of the Women’s Industrial Development Association (WIDA) between 1932 and 1939. She and Jim supported the establishment of Clann na Poblachta and its involvement in the first inter-party government in 1948. Kathleen Barry Moloney died, at the age of 72, in Dublin on 10 January 1969.

This collection was deposited in UCD Archives by her grandson Dr Eunan O’Halpin in February 1990.

Kathleen Barry Moloney
Files of newspaper cuttings and correspondence relating to her tour of the USA as a member of the republican delegation April–May 1922. Administrative material, financial records, and correspondence dating to her position as general secretary of the Irish Republican Prisoner’s Dependents Fund (IRPDF) July 1922–August 1925. Extensive files of correspondence dating to her tour of Australia on behalf of the Reconstruction Committee of the IRPDF, October 1924–April 1925. Also newspaper cuttings, photographs and memorabilia. Correspondence concerning the conditions of her employment as Sales Publicity Advisor, Electricity Supply Board (ESB) 1930–49. Series of files relating to her work on staff committees in the ESB and as the ATGWU representative for women staff of the ESB, 1942–50. Large body of mementos, personal items, correspondence, newspaper cuttings, poems, printed matter, and photographs concerning her brother Kevin Barry, 1919–68.

Jim Moloney
Files of correspondence, mostly from Kathleen, prior to his arrest and during his internment, 1923–24; during her tour of Australia, 1924–25; and the early years of their marriage, 1927–34. Comprehensive file relating to his successful application for a Military Service Pension, 1935–48. General Photographs, correspondence, memorabilia concerning the extended Barry and Moloney families, 1905–57. Photographs, correspondence concerning the Barry-Moloney children 1926–68