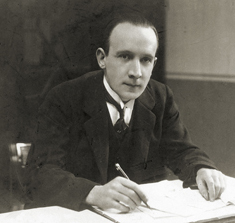 Kevin Christopher O'Higgins (1892–1927) was born on 7 June 1892 in the Dispensary House, Stradbally, Queen's County (Laois). His parents were Thomas Francis Higgins (d. 1923), medical officer for the Athy union and county coroner, and Anne Sullivan (d. 1953), daughter of Timothy Daniel Sullivan (poet, MP, and lord mayor of Dublin), and sister of the wife of Timothy Michael Healy KC, first governor-general of the Irish Free State. He was the fourth son and the fourth of fifteen children.

The family moved to ‘Woodlands’, an eighty-six acre farm near Stradbally, where O'Higgins spend most of his childhood, attending the local convent school, then the Christian Brothers' School, Maryborough; Clongowes Wood College; and St Mary's College, Knockbeg, Carlow. He then attended St Patrick's College, Maynooth, with a view to joining the priesthood. However, he was moved to the seminary in Carlow in 1911 for breaking the non–smoking rules, and ultimately abandoned the possibility of a vocation. For a brief period he acted as an apprentice to Maurice Healy, a Cork solicitor and brother of Timothy, while at the same time resuming his BA studies in legal and political science at University College, Dublin. With his attention Shifting increasingly to politics, he devoted limited time to his studies and obtained a pass BA in 1915 and a similar LLB in 1919.

He joined the Irish Volunteers‌ in 1915. Two years later he became captain of the Stradbally company, Carlow brigade, and in 1918 was imprisoned for five months in Mountjoy gaol and Belfast internment camp. In the December 1918 general election he was elected Sinn Féin‌ MP for Queen's county, quickly gaining recognition for his abilities in Dáil Éireann. In January 1919 he became assistant minister for local government, and raised a republican loan of £10,000 in his constituency. Upon the arrest of the minister for local government (W.T. Cosgrave) in 1920, O’Higgins became substitute minister. In the general election of May 1921 he was re-elected for the Laois-Offaly constituency and again appointed assistant minister for local government in August.

Through his Sinn Féin activism, O’Higgins met his future wife, Brigid Mary Cole (1898–1961). an English teacher at St Mary’s College, Knockbeg. The rector of this school, Fr Patrick Doyle, was one of the seminary instructors who had allowed O’Higgins to smoke when he had been a student there, and later permitted him and other Sinn Féin members to use the college as a hiding place. Some anxiety arose due to the romantic interest of Gearoid O’Sullivan, a teacher at Knockbeg and later Adjutant-General of the Free State Army, in Brigid. However, in October 1921 O’Higgins declined the position of secretary to the Irish delegation at the peace negotiations to marry Brigid Cole on 27 October 1921 in the Carmelite Church, Whitefriar Street, Dublin. The ceremony was attended by Eamon de Valera‌, and Rory O’Connor was best man.

O’Higgins was a strong supporter of the treaty and, in January 1922, became minister for economic affairs in the Second Dáil, holding the same position in the Provisional Government. In the 1922 general election he was again returned for the Laois-Offaly constituency, and after the deaths of both Arthur Griffith and Michael Collins‌ in August, he became Minister for Home Affairs and Vice-President of the executive council. The Home Affairs ministry was changed to Justice in 1924. He served briefy as Minister for External Affairs in the summer of 1927.

He played a vital role in consolidating the newly established institutions of the Irish Free State. He is recognized as the founder of the Gardaí Síochána, the national police force established in 1922. His strength of character was most poignantly demonstrated by his perseverance after the murder of his father in February 1923, as well as in his signing the death warrant of Rory O’Connor, his former friend and best man. He also notably took the lead in confronting the private factions within the Free State army, as the government sought to return it to peace-time numbers in 1924. At the Imperial Conference in 1926, his insightful contribution to Commonwealth debates consolidated a significant reputation internationally.

His name was also made as a reformer of the Irish drink trade, with three Liquor Acts to his credit. A belief in the need for unity through reconciliation rather than division and violence characterised his view of partition and the ideal of a united Ireland. Viewed by many as a stern and conservative man, O’Higgins possessed a self-depreciating sense of humour and wit that was often unacknowledged. He and Brigid had two daughters, Meav (b. June 1923) and Una (b. January 1927). A son, Finbarr Gerald, was also born in November 1924, but died in infancy.

O’Higgins’ assassination occurred on Sunday the 10 July 1927 near his home in Booterstown, Dublin, while walking to mid-day mass alone. He had just recently returned from a League of Nations naval conference in Geneva. On his death-bed O’Higgins forgave his attackers, gave instructions regarding his affairs and spoke to his family and friends. The following day his remains were removed from his home, Dunamase House, Cross Avenue, Booterstown, to the Mansion House, Dublin, where his remains lay in state. His funeral took place on 13 July after a requiem mass at St Andrew's Church, Westland Row. It was a day of national mourning, with the funeral cortège stretching for over 3 miles along crowded streets. O'Higgins was buried in the north-west corner of Glasnevin cemetery, in the division known as St Brigid's, in the same grave as his infant son.

This collection was deposited in UCD Archives by Una O’Higgins O’Malley in January 2004.

Material relating to his children, Una and Maev, his wife, Brigid O’Higgins, and other family members 1921–92.