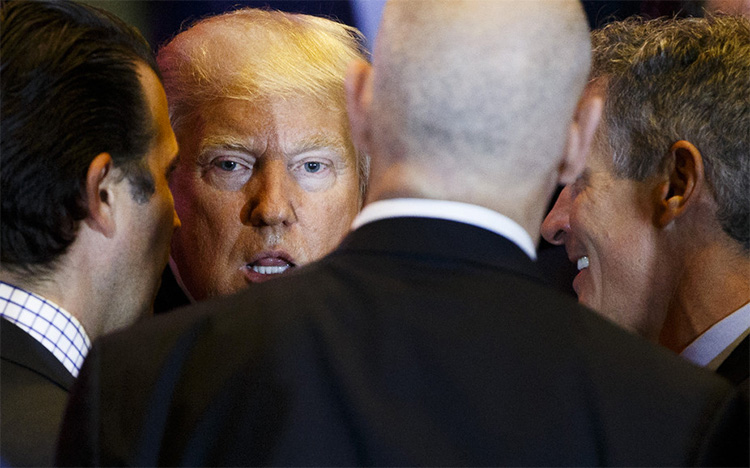 After a clean sweep of convincing wins in the latest slew of primaries, Donald Trump looks better placed than ever to secure enough delegates to win the Republican presidential nomination. As Trump put it, with characteristic swagger, he considers himself “the presumptive nominee, absolutely”.

With that in mind, Trump has been taking a number of steps to appear more statesmanlike. Observers have credited this evolution in large part to the influence of a new campaign operative, Paul Manafort, who has advised numerous former Republican politicians.

One of the steps Trump has taken in an effort to appear more presidential and less, well, Trump-like, was a major foreign policy speech delivered at the prestigious Mayflower Hotel in Washington DC. As influential Republican expert Lanhee Chen explained, the speech is “part of the normalisation effort, or the mainstreaming of Donald Trump”.

This is the first time Trump has offered an extended explanation of his foreign policy worldview. The speech built upon the elements of conservative nationalism that he has occasionally mentioned and included plenty of harsh criticism of President Obama and Hillary Clinton. By Trump’s standards, it was a polished performance that featured a coherent structure – something that is usually missing from his rambling campaign speeches. He even went so far as to use an Obama-esque teleprompter.

But however superficially polished, the speech also retained typically Trumpian elements of the clumsy and/or the implausible.

The organising principle of his worldview is apparently to always put “America first”, an unfortunate and presumably unintentional echo of pre-World War II isolationists. Trump insisted that he would ensure that countries such as China would treat the US more respectfully on his watch, but how he would accomplish this was left unexplained.

What should we make of this speech and of Trump’s efforts to cultivate a more serious image? Wouldn’t it be reasonable to expect that as a president Trump would be more sober and predictable once confronted by the awesome responsibilities of the Oval Office?

This is not as implausible as it sounds. There are not a few Republican insiders who’ve long viewed Trump as an acceptable candidate, if far from an ideal one. They believe he’s ideologically flexible (unlike his much-loathed rival, the hardliner Ted Cruz), and that once elected he’d be willing to embrace many of the conventional conservative positions he has scorned on the campaign trail.

Indeed, in his first formal policy speech of the campaign at the AIPAC Conference in March 2016, Trump surprised the audience by keeping to standard partisan Republican rhetoric on the subjects of Israel and the Middle East – a policy area on which his usual populist meanderings would have been especially embarrassing to party leaders.

In addition, Manafort, the new adviser, recently told the Republican National Committee that his candidate has essentially been play-acting for the benefit of conservative voters. He recently informed the party that Trump “gets it": “The part that he’s been playing is now evolving into the part that you’ve been expecting. The negatives will come down, the image is going to change.”

There is every reason to be sceptical. Recent reports indicate that Trump was displeased with Manafort’s comment, and he shows little inclination to discontinue his consistent output of offensive statements. During his most recent victory speech, Trump argued that Clinton is winning the Democratic primary because she is a woman: if she “were a man, I don’t think she’d get five percent of the vote". And of course, Trump has an unparalleled track record of outrageous statements that long predate his run for the Republican nomination.

What, then, could we expect from President Trump in the realm of foreign policy? In spite of what was (at least by the standards of the modern Republican Party) a mostly conventional speech, there is every reason to believe he would be a catastrophic commander-in-chief.

Many of the policies Trump advocates would profoundly damage US interests and could destabilise key regions around the world. And never mind his bizarre and unworkable promises to build a wall between the US and Mexico and prevent Muslim immigrants from entering the country – there’s plenty more to chew on.

He’s also suggested that it might be prudent for Japan and South Korea to develop independent nuclear arsenals, a move that would further inflame an already tense East Asia. Neither country sounds enthusiastic. Trump’s conviction that the US and other Western countries should use torture when interrogating suspected terrorists and be prepared to kill their family members – though he later hedged on that one – drew widespread condemnation, even from Republican national security officials.

Another reason to expect that Trump’s statecraft would be problematic is that, as scholars have long understood, personality matters a great deal when it comes to foreign policy decision-making. And despite his noticeably professionalised recent speech, Trump has clearly given little if any thought to most of these questions and has considerable difficultly in discussing them outside the context of prepared remarks. That much was clear during his interview with the Washington Post editorial board last month.

And the limited areas in which he has exhibited consistent tendencies are troubling. These include a bombastic nationalism untempered by intellectual curiosity – a nightmarishly inflated, George W. Bush-esque American chauvinism – and at least a degree of admiration for authoritarian leaders such as Vladimir Putin.

There is ample reason to believe that when it comes to the conduct of foreign policy, rather than a sophisticated understanding of international politics, Trump as president would mostly rely on his instincts. And all indications are that these are, to say the least, unsuitable for the most important elected position on earth.