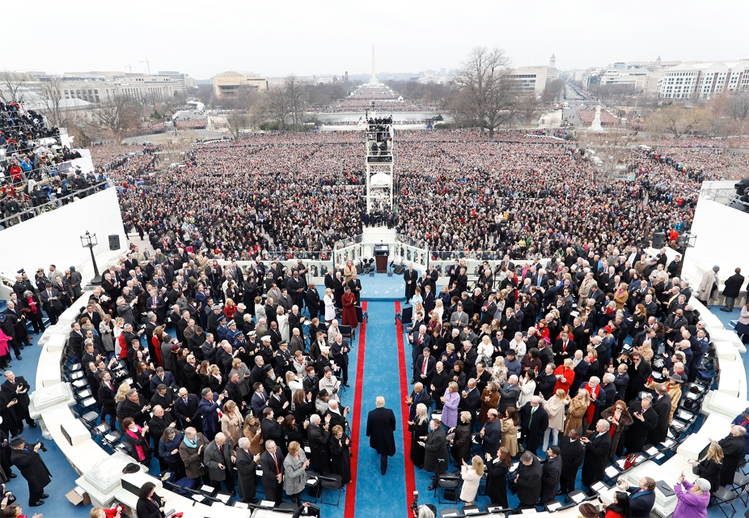 The Trump era has begun. How can we make sense of it?

Donald Trump is now the 45th president of the United States.

As Trump’s election as president in itself makes plain, America is indeed undergoing an excruciatingly painful reinvention. We cannot yet know where it will lead, and making sense of it will be no easy task. The last time America was this confused and disturbed, it spawned a whole cultural project dedicated to simply conveying the reality of what was happening.

Reflecting on the 1960 televised debates between presidential candidates Richard Nixon and John F. Kennedy, the novelist Philip Roth lamented that

The American writer in the middle of the 20th century has his hands full in trying to understand, and then describe, and then make credible much of the American reality … The actuality is continually outdoing our talents, and the culture tosses up figures almost daily that are the envy of any novelist … on the TV screen, as a real public image, a political fact, my mind balked at taking [Nixon] in. Whatever else the television debates produced in me, I should like to point out, as a literary curiosity, that they also produced a type of professional envy.

This sense that reality was outrunning the capacities of writers to represent it was not new, but tellingly articulated by Roth as a challenge occasioned by the growth of televisual media and the transformation of politics into spectacle. His comments indicated something profound and shattering: an epochal shift in the “American reality.” Prescient stuff, given today’s laments about a “post-truth” society.

Superman comes to the supermarket

It is not coincidental that Roth was writing at the start of a period of intense social and political unrest in the US. As he pilloried many contemporary American writers for failing to respond to this epochal change, he noted one exception: “There is Norman Mailer. And he is an interesting example, I think, of one in whom our era has provoked such a magnificent disgust that dealing with it in fiction has almost come to seem, for him, beside the point.”

Sure enough, Mailer helped fashion a “new journalism” that could cope with the emerging society of the spectacle in the 1960s. In his 1960 essay on Kennedy’s election campaign, Superman Comes to the Supermarket, Mailer described the president-to-be as an “existential hero” who could tap into the drives that roil the national unconscious. This reflected Mailer’s very particular vision of American history:

Our history has moved on two rivers, one visible, the other underground; there has been the history of politics, which is concrete, factual, practical, and unbelievably dull … and there is a subterranean river of untapped, ferocious, lonely and romantic desires, that concentration of ecstasy and violence which is the dream life of the nation. In Kennedy, Mailer saw someone who could fuse these historical currents and potentially renew the nation: “Only a hero can capture the secret imagination of a people, and so be good for the vitality of his nation.” To be sure, he recognised the dangers in celebrating a “superman” as leader, but reckoned Kennedy struck the right balance between rational substance and romantic style.

Later, with his hero assassinated in Dallas and the decade descending into protest and chaos, Mailer became a more jaundiced witness, if no less engaged. In The Armies of the Night, his account of the 1967 march on the Pentagon by legions of protesters, he argued that the US had entered the “crazy house of history,” reflecting the growing absurdity of events in late 1960s America. Yet he was smitten by the “idea of a revolution which preceded ideology.”

In the carnivalesque figures of the protesters he saw a flicker of existential promise:

They were close to being assembled from all the intersections between history and the comic books, between legend and television, the Biblical archetypes and the movies … the aesthetic at last was in the politics – the dress ball was going into battle. The March on the Pentagon, 1967. Wikimedia Commons

This was to be a last hurrah for a counter-cultural politics that foundered on the mediocrity of the American mainstream. The centre held, just. Mailer’s perspective may have been perversely romantic, but this was also its power as a dissenting vision, attuned to “the dream life of the nation.”

Celebrity comes to the White House

American reality now seems to be undergoing another seismic shift, again in sync with a cycle of violence and civil unrest. And once again, reality appears to be outrunning American writers as they struggle to explain it, to make it credible. Step forward another Übermensch. Is Trump an existential hero in the mode Mailer described? And if he really is someone “who reveals the character of the country to itself”, what does he reveal about the character of the US today?

Trump has channelled the discontents of the nation, and tapped into angers and resentments that are more than political. He dares to say what should not be said, shocking the political and cultural elites, speaking to and for the “real Americans” in their language, giving voice to their inarticulate anger and thwarted dreams. He eschews the discourse of decency and decorum, bragging that he has “no problem” with the size of his penis.

Trump’s call to “Make America Great Again” is in some part an articulation and legitimisation of what has been disavowed in the making of a liberal democracy. He promises national renewal, but not the progressive, forward-looking renewal promised by Kennedy. Instead, he offers a regressive, backward-looking nationalism.

For Mailer, Kennedy’s heroism was inherent in his ability to balance glamorous style with political substance. Trump displays no such ability – he displays an excess of style and a deficit of substance. His heroism, such as it is, marks a new stage in the aestheticisation of politics, in which entertainment and political life have converged as never before.

Trump’s celebrity is the lifeblood of his appeal. He astutely understands his currency as a performer – “I will be so presidential”, he promised – and as a producer – “I play to people’s fantasies … I call it truthful hyperbole”.

Trump is the superman unleashed as celebrity phantasm, a figure of libidinal enjoyment who leeringly embodies the obscene underside of liberal democracy. And as was his campaign, so his presidency will be shadowed by neo-fascist subtexts and authoritarian tendencies. Witness his convictions that “at the bedrock of our politics will be a total allegiance to the United States of America”, and that “we all bleed the same red blood of patriots”.

As in the 1960s, today’s cultural and political turmoil is playing out in struggles over identity, representation and recognition – but in a more profound sense, the American reality itself has changed. This is not identity politics as we knew it; this is the politics of “wounded attachments”, resentment and grievance, the politics of all-or-nothing.

Trump’s gift for seizing attention and peddling fantasy plugs him into the zeitgeist and bemuses those who believe lies should have consequences. For many liberal, educated Americans, Trump’s political ascension is a confusing assault on their sense of reality. For writers and intellectuals it is an affront to their abilities, à la Roth, to make credible the new American reality.

Maybe this new reality will find or produce its own Mailer. I hope whoever it is shares that writer’s “magnificent disgust.” Even as Trump was driven to his inauguration, legions of protesters gathered in the city, across the US, and beyond. Perhaps new armies of the night are stirring.