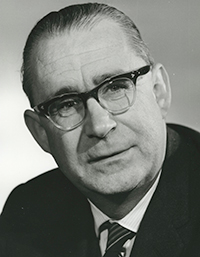 Dooge is often credited with turning hydrology into the science it is today, being instrumental in the establishment of the International Commission on Water Resource Systems. He served as its President for several years. As well as being an engineer and hydrologist, he was also a climatologist and served as the chairman of the Scientific Advisory Committee of the World Climate Impact Advisory Committee.

Apart from his illustrious academic career, Dooge led an active political life. From 1961 to 1977 he was a Senator, also serving as the Seanad’s Cathaoirleach (1973–77). Dooge was an influential member of the Fine Gael Party and a close associate of Garret FitzGerald’s, working closely with him in the reorganisation of the Fine Gael Party during the late 1970s. As Cathaoirleach, Dooge was one of the three members of the Presidential Commission, and would be called upon (along with the Chief Justice and the Cathaoirleach of the Dáil) to serve the powers of the President should he or she resign or die. Incredibly, this happened twice during Dooge’s term, firstly with the death of Erskine Childers in 1974, and then with Cearbhall Ó Dálaigh’s resignation in 1976.

Dooge announced his retirement from politics in 1977 to devote more time to his academic career. In 1981, however, he returned to the Seanad. He was a member of the Fine Gael team that negotiated the coalition deal with the Labour Party in 1981, and was subsequently appointed by FitzGerald as Minister for Foreign Affairs. Although many considered him an inspired choice for the role, it was short-lived as the 22nd Dáil lasted for only 252 days. Dooge declined appointment to the new coalition formed in the 1982 general election.

In 1984 a new political role took form for Dooge. Ireland’s Presidency of the European Community coincided with a renewed interest amongst member states for further European integration. At a meeting at Fontainebleau, France in 1984, the decision was made to form an Ad Hoc Committee on Institutional Affairs, to have representatives from all member states convene and look at potential avenues and methods for European integration. FitzGerald decided to appoint Dooge to this Committee, not only as Ireland’s representative but as chairman. This was met with pressure from several other member states for the appointment of someone with a greater international profile, especially from West Germany, who pushed for the appointment of their former President, Karl Carstens. Nonetheless Dooge remained in the position, and the Committee met throughout late 1984 and early 1985 before producing a final report, often referred to as the Dooge Report, in March 1985. This report is credited with paving the way for the Single European Act and the Maastricht Treaty, with much of the language used in the latter being the same. Dooge maintained his commitment and enthusiasm for European integration after the Ad Hoc Committee with his longstanding membership of the Irish Council for the European Movement, of which he became Honorary President. He also served as President of the Royal Irish Academy from 1987 to 1990.

Dooge received several awards for his work in the fields of engineering and international affairs. In 1986 he was awarded the William Bowie Medal by the American Geophysical Union for ‘outstanding contribution to fundamental geophysics and for unselfish cooperation in research’. The World Meteorological Organization awarded him their highest prize in 2001, the International Meteorological Prize. In 2000 he was made an International Fellow at the Royal Academy of Engineering, and in 2005 was awarded the Prince Philip Medal by the Duke of Edinburgh in recognition of his status as ‘an outstanding figure in the field of hydrology’. Also in 2005, the Royal Irish Academy awarded him their gold medal, presented by President Mary McAleese.

Jim Dooge died at home in Dublin on 20 August 2010. Predeceased by his wife Roni and daughter Meliosa, he was survived by his sons Colm and Diarmuid, and daughters Clíona and Dara.

This collection was deposited in UCD Archives by Professor Dooge in five tranches between 1987 and 1989, with the sixth and final tranche deposited by his family in 2012.

Papers relating to Dooge’s chairmanship of the Ad Hoc Committee for Institutional Affairs to the European Council (also referred to as the Dooge Committee), including:

Papers relating to Dooge’s tenure as Minister for Foreign Affairs (MFA), 1981–82, including:

Ministerial meetings: material relating to meetings of the Security Committee; general notes taken by the MFA at various meetings.

Other DFA concerns: general concerns such as routine inter-departmental briefings and briefs on international situations; correspondence with Ambassadors and embassies (these were numbered 1–41 and this arrangement has been retained, although some documents are missing); papers relating to development aid; papers relating to Irish submissions and involvement at the United Nations, mainly the General Assembly.

Ministerial correspondence, mainly letters of congratulations on Dooge’s appointment as MFA. This file has been kept in its original order.

Irish Council for the European Movement (ICEM), 1963–2003: minutes and invitations to meetings; reports by ICEM and other relative documents; papers relating to events planned by ICEM; materials produced by ICEM for European elections and treaty referenda; general correspondence.