‘Direct provision’ is the system that Ireland uses to accommodate and provide limited social and economic rights for people seeking asylum.  When introduced in April 2000, the government stated that people would be in the system for a maximum of six months. Some 22 years later, over 7,000 people are in direct provision, often spending years waiting for their asylum claim to be processed. The Irish Government has finally committed to ending direct provision by 2024.

Dr Thornton’s research has enhanced legal and policy analysis of the system, assisting protection seekers, activists, civil society and politicians in advocating for the end to direct provision. His research informed public discourse on the human rights violations caused by direct provision, and contributed to enabling legal change to end it.

Together, these activities led to the UCD-funded project Exploring Direct Provision, which provides wider access to otherwise unavailable government decisions and policy discussions on the system of direct provision. Through his research, Dr Thornton has engaged with legal and political systems in search of a desirable outcome: core protection of human rights for people seeking international protection and an end to direct provision.

What is clear from Thornton’s research is that over the past 20 years, the purpose of direct provision has been to deter people from coming to Ireland to claim asylum. 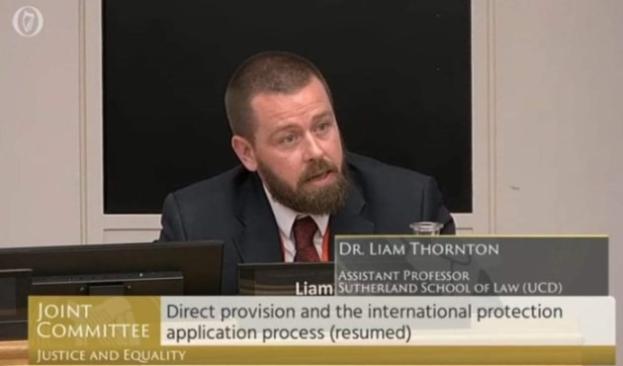 Dr Thornton’s research contributed to policy analysis and legal understanding of the system of direct provision. He has helped shape public discourse on the issue, and has provided expert analysis to enable legal change, which ultimately seeks to protect the human rights of people currently in direct provision.

Significant lobbying by asylum seekers and NGOs led to a systemic review of the direct provision system in 2014-2015 and 2020-2021. Dr Thornton’s research contributed by highlighting concerns with direct provision from a human rights legalistic standpoint. In fact, he conducted the first systemic legal evaluation of the system of direct provision.

He engaged with policy actors in Ireland and internationally, by providing ad-hoc research support and public information, drafting a Bill of the Oireachtas, and informing UN human rights committees about Ireland’s lack of compliance with its freely accepted obligations under international human rights law. His research – along with protest by protection seekers and significant engagement by civil society – continues to highlight the need for Ireland to end direct provision to ensure proper rights protections for persons subject to the system.

Public communication of Dr Thornton’s research findings and analysis has been a key aspect of his work on direct provision. This is most readily provided through his website, and through his significant contributions in the media on this issue, with dozens of appearances across radio, TV, podcasts and mainstream newspapers. His research has been relied upon extensively by media in various ways:

This has contributed in a major way to wider public debates on how human rights protections of private life, family life, the right to work and the right to social welfare need to be embedded into any system that replaces direct provision.

“The direct provision system has had a devastating impact on many of the 64,594 people who had gone through the system by the end of 2019. What is clear from Thornton’s research is that over the past 20 years, the purpose of direct provision has been to deter people from coming to Ireland to claim asylum.”
—Bulelani Mfaco, Movement of Asylum Seekers in Ireland, 2020

“Asylum seekers, human rights campaigners and legal experts such as Thornton say the pandemic has shone a spotlight on structural problems that have long existed in Ireland's asylum system. Against the backdrop of Covid-19, the often crowded, poor conditions have become that much more apparent.”
—Eliza Mackintosh, Amid the pandemic, a group of asylum seekers was moved to a small, rural Irish town. Then they started testing positive for Covid-19, CNN, 16 June 2020

“When I suggested the system might be too adversarial, Dr. Liam Thornton said he felt I was being generous in so describing the attitude and referred to the existence of a culture of disbelief. He told the committee that when the Department of Employment Affairs and Social Protection started to plan for the increases in the direct provision allowance, an official in the Department of Justice and Equality who was asked to offer a comment or express views began by stating they are all working anyway.”
—Deputy Donnchadh Ó Laoghaire T.D., Joint Committee on Justice and Equality debate. Direct Provision and the International Protection Application Process: Discussion (Resumed). Wednesday, 19 Jun 2019

“Dr Liam Thornton, a researcher on the law and policy of direct provision in UCD's school of law, recently published an article on the dubious legality of the direct provision system. The article notes that in 2006 the then Secretary General of what is now the Department of Social Protection, Mr John Hynes, raised his concern with the then Secretary General of what is now the Department of Justice and Equality, Mr Seán Aylward, that the regular direct provision payments to asylum seekers were outside the powers, or ultra vires, of the Department of Social Protection. According to documents received by Dr Thornton after a freedom of information request, an attempt was made in 2006 or 2007 to place the direct provision payment on a legislative footing. However, the attempt was subsequently abandoned. I can provide the Minister with a copy of Dr Thornton's article, the correspondence between the Secretaries General and the draft legislation if he so desires.”
—Senator Jillian van Turnhout, Seanad Eireann Debate, 18 April 2013