Research by Professor Michelle Norris at UCD has enabled the Irish government to provide more social housing forlow-income households. Social housing is vital to supply affordable housing and to tackle homelessness, but limits on public spending make it challenging to provide.

Professor Norris' research has influenced social-housing policy in Ireland, and her findings have helped to shape strategies for putting these policies into practice. The research has been mentioned in policy statements and parliamentary debates, and Professor Norris has been invited to speak to policymakers, politicians and the media. She has also been appointed to the boards of relevant government agencies and policy advisors.

Professor Norris has had a longstanding interest in social housing, but Ireland’s economic bust in 2007-08 inspired her to research its funding in-depth. After the bust, government funding for social house building and purchase was reduced by 88%. “This made me wonder how previous governments funded extensive social housing output despite regular recessions,” she says. Researching this issue prompted further questions and research (with Michael Byrne) about increasing the affordability of social housing for government. Some of the factors they looked at include: 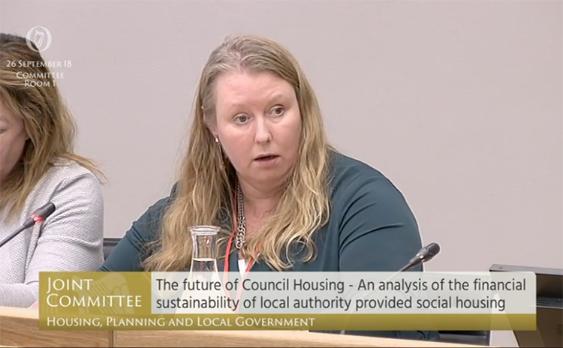 Professor Norris found that social housing was affordable when it was funded by loans that were repaid using tenants' rents (linked to debt service costs) and property taxes. Linking rents to tenants' incomes, selling dwellings at sub-market value and abolishing property taxes from the 1960s destabilised this funding model. From 1987, social housing was funded entirely by government grants and so it was exposed to changing public finances.

Professor Norris found that Austrian and Danish social housing is more affordable because it is mainly funded by commercial loans, which spreads-out costs and reduces exposure to exchequer finances.

Social housing’s role as a housing market stabilisation measure in Austria inspired Professor Norris to examine Irish social housing's market impact. Due to funding, it is pro-cyclical – it boosted our housing boom and deepened the bust.

4. How Irish social housing funding can be reformed (2016-date)

Prof Norris is currently looking at how the reforms identified in previous research are being put into practice.

Professor Norris' research has had several impacts on social housing policy and on arrangements for the funding and delivery of social housing in Ireland since the economic bust of 2007-08.

Between 2011 and 2016 Prof Norris was a Taoiseach’s appointee to the National Economic and Social Council (NESC), which advises the Irish government on economic and social policy. During this time, she contributed to four NESC reports on housing policy by working with NESC staff to scope their focus and by advising them on content. The impact of her research is evident in the emphasis these reports place on the undersupply of social housing in Ireland, the negative socioeconomic consequences, and the contribution of social housing financing arrangements to the lack of affordable housing.

In 2011, Professor Norris was appointed by the housing minister as the Chair of the Board of the Housing Finance Agency (HFA) and reappointed for a second term in 2016. This government agency borrows on international markets to finance social housing and mortgages for low-income borrowers. It currently manages €4.4 billion in outstanding loans.

Professor Norris was inspired to apply for this position by her research on the factors which had undermined the financial sustainability of Irish social housing, and how this sector is financed more effectively in other European countries. Her research indicates that relying on central government grants had made Irish social housing vulnerable to cutbacks in harsh economic times, and that replacing grants with loans would spread out the costs of providing social housing and make it more affordable for government.

Strategies for implementing these policies

Professor Norris is currently researching strategies for implementing the reforms she has proposed to social housing policy and funding arrangements with local authorities and non-profit sector social housing providers. “My interaction with officials and councillors in South Dublin County Council has inspired proposals for the reform of social housing funding in this local authority,” she explains. “An Irish Research Council grant has enabled me research non-profit social housing providers’ experience of the transition from grant to loan finance, which inspired me to reform HFA loan assessment procedures in 2016.”

Participation in policymaker and practitioner conferences