Dr Earley’s research looks at Irish traditional song, Irish choral music, and the relationship between the two. As a result of this research – and the subsequent composition and performance of new collections of Irish choral music by Dr Earley and the Choral Scholars of UCD – there has been significant worldwide engagement with the music and poetry of Ireland.

The ensemble’s records (Invisible Stars and Perpetual Twilight) have performed exceptionally well, with 3 million listeners on streaming services, album sales in over 80 countries, and over 16 million views of performances on social media. They have outperformed all other professional choral ensembles on Signum Records from 2016 to 2018.

Dr Earley’s research, creative practice and output – as demonstrated by published score sales – is influencing how choral directors around the world are programming concerts.

Dr Earley found that traditional Irish song lends itself to adaptation for vocal ensembles, and that modern collaboration around historical music and texts of Ireland would promote the country’s rich cultural heritage worldwide. However, his research confirmed that Irish choral music emerging from the 19th century took very little influence from Irish traditional melody or the Irish language.

Over the past five decades there have been pioneering developments in harmony, composition and arrangement on which this project builds. Dr Earley selected composers from Ireland and abroad (who contributed to these developments) to create new choral works based on his research. These works prominently featured Irish texts by Eva Gore Booth, William Butler Yeats, Frank McGuinness and James Joyce.

The final stage of the project centred around rehearsal and performance of these new choral works. Recordings were made in 2014 and 2015 at Castleknock College, and at All Hallow’s Chapel in 2018. The production team included Nigel Short (producer) and Andrew Mellor (recording engineer). Post-production editing occurred at Floating Earth Studios in London. Two professionally recorded collections associated with this project comprise eleven world-premiere recordings, twelve arrangements of traditional songs for choir, eight new works by Irish composers, and seven new works by international composers. Related concert performances were presented at Carnegie Hall, New York; and the National Concert Hall, Dublin.

For sheer beauty of sound and contemplative luxuriousness, this debut by the mixed-voice Choral Scholars of University College Dublin is an altogether captivating experience.

Evidence of the reach of impact

Sales figures of the digital and physical recordings made in association with this ongoing project are an indicator of impact and success: 3,000,000 streams on Spotify and Apple Music; 10,000 downloads of individual tracks; and 16,000 album sales in 80 countries worldwide. Invisible Stars (the ensemble’s first album) continues to be a best-selling disc on Signum Records (BBC Music Magazine ‘Label of the Year’) since 2016. The Choral Scholars’ recording of Mo Ghille Mear remains the label’s most streamed song to date. Views of music videos associated with this creative output on social-media platforms have exceeded 16,000,000 worldwide. 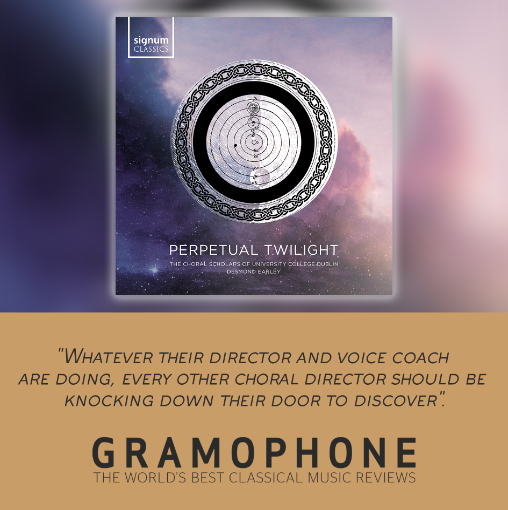 The social and cultural impact of this performance project is evident through direct feedback from listeners. Individuals from around the world have contacted Dr Earley to share their personal response to recordings and videos (see additional testimonials below):

“When describing Irish music, John O’Donohue spoke of the way ‘the line of the landscape’ and the ‘memory of the people’ finds its way into the music. It seems to express both the greatest joy and the deepest sorrow […] with a kind of healing force. This has certainly been my experience while listening to Invisible Stars.”
— Matt Chapman, Auckland, New Zealand

The success of the project has resulted in multiple interviews and performances on television and radio, concerts at prestigious venues, and other special appearances:

Dr Earley’s creative output is changing how choral directors are programming material. This is indicated by the sale of printed music scores published by Seolta Music (Ireland): sales of sheet music from Invisible Stars have exceeded 10,000 copies. Press reviews of Invisible Stars have commented on the essence of this project:

“Blending ‘folk’ voices with choral precision and tight harmony isn’t easy but Desmond Earley has a passionate stake in both and doesn’t put a foot wrong here. Too many highlights to list, but Ivo Antognini’s ‘War’ and ‘Peace’ stand out, as do a lovely arrangement for tenor of ‘Black is the Colour’ and Earley’s own ‘He wishes for the cloths of Heaven’ (after Yeats).” ****
— Choir & Organ Magazine UK

Seven years of research and creative output – as represented by this project – has reshaped Irish choral music and has exceeded the expectations of impact. In presenting a collection of traditional song mixed with newer choral compositions, Dr Earley’s work is impacting audiences, creators, performers, programmers and scholars across the globe.

“Whatever Artistic Director Desmond Earley and voice coach Síle McCarthy-Cannon are doing with The Choral Scholars of University College Dublin, it’s something every other choral director should be knocking down their door to discover.”
— Gramophone Magazine

“Blending 'folk' voices with choral precision and tight harmony isn't easy, but Desmond Earley has a passionate stake in both and doesn't put a foot wrong here.”
— Choir and Organ Magazine

“The Choral Scholars of University College Dublin is one of the finest choirs I have ever heard on my travels: such fabulous intonation, blend and musicality.”
— Nigel Short, Artistic Director, Tenebrae

“...a fascinating and continually changing landscape of sounds and imagery that instantly pleases the musical taste buds.”
— Sunday Business Post

“For sheer beauty of sound and contemplative luxuriousness, this debut by the mixed-voice Choral Scholars of University College Dublin is an altogether captivating experience.”
— Classical Ear

“Since their inception, the Choral Scholars of University College Dublin have been a cultural flagship for the university to which they belong. As their reputation has soared, the Scholars have handsomely enriched the choral landscape in Ireland, and their wonderfully polished performances and recordings attest the value of serious music as an educational as well as an artistic resource in UCD.”
— Professor Harry White, Chair of Music, UCD School of Music 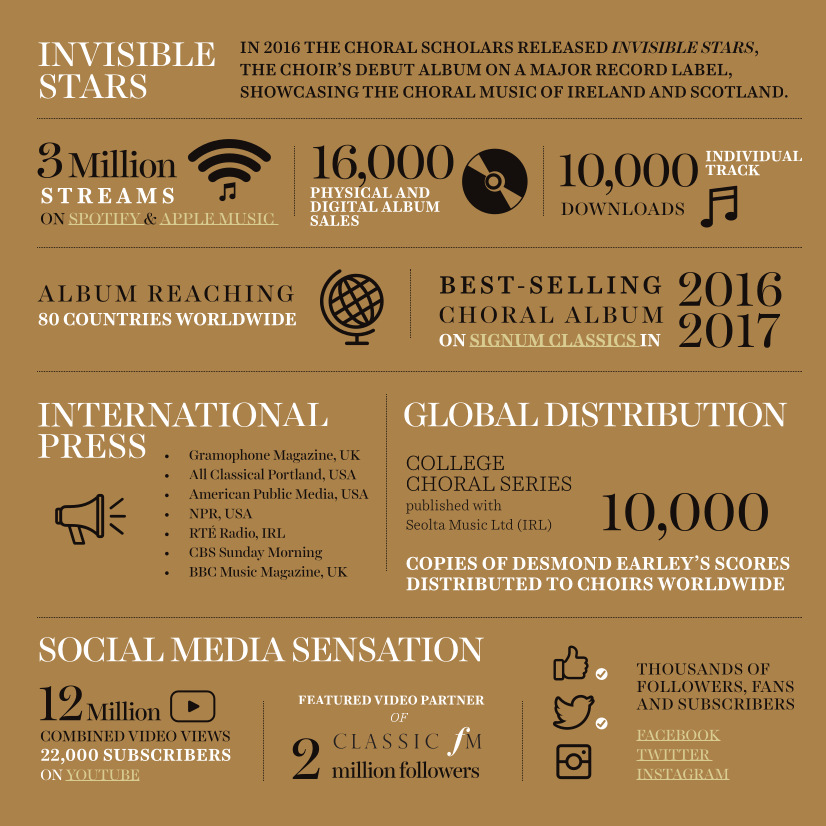