Typhoidland: using the past to inform the future of typhoid control

Typhoid is a major threat. Every year, 14.3 million people suffer from the disease and 135,000 are killed – many of whom are children. Typhoidland is an international research and engagement project that challenges the myth that typhoid is a disease of the past, raises awareness about antimicrobial resistance, and analyses past interventions to inform current efforts to control the disease.

Since 2018, Dr Kirchhelle and his co-curator, Dr Samantha Vanderslott, have devised multi-award-winning exhibitions and educational content in the UK, US, Nepal, Bangladesh, India, and Ireland. Through these efforts, their research has reached hundreds of thousands of people, raising awareness of the challenges of typhoid control. They have also co-authored high-impact academic publications on typhoid control, and have promoted their findings to international news outlets and the WHO.

Dr Kirchhelle and colleagues combined techniques from different fields – medical humanities and sciences – to analyse the long-term impact of various interventions aimed at tackling typhoid, locally and internationally. The measures they looked at were based on sanitation, vaccines and antibiotics.

To that end, between 2018 and 2020 the team analysed archival, health, and financial records from seventeen Anglo-American cities. This revealed significant differences in the way sewage and water systems had evolved during the Victorian period, and how these systems affected the incidence of waterborne diseases like typhoid. The research also showed that long-term financial credit (in the form of public bonds and government loans) is important for constructing and maintaining accessible water infrastructure, and for fostering political alliances for typhoid control. 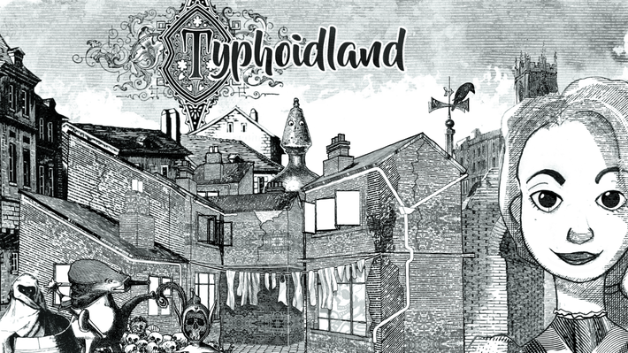 A parallel collaboration with microbiologists looked at the links between social history (like international health priorities and the use of antibiotics) and how typhoid bacteria evolved over time. This work highlighted how international neglect and beliefs that “typhoid is a disease of the past” fostered antimicrobial resistance. This is in part due to increased use of antibiotics to compensate for inadequate access to healthcare and water, sanitation, and hygiene (WASH). The research also highlighted the inefficiency of expensive control measures that focus on stopping typhoid from crossing borders and fail to tackle underlying environmental and social drivers of the disease.

During the COVID-19 pandemic, the team’s research on human challenge studies (when volunteers are deliberately infected with pathogens for research purposes), and adverse effects resulting from early typhoid vaccination campaigns, resulted in commentaries on the need for harmonised international guidelines for COVID-19 challenge studies and bespoke compensation schemes for adverse effects resulting from COVID vaccine rollouts.

An ongoing collaboration with social scientists at St John’s Medical College in Bangalore, India, is highlighting how British imperial norms of typhoid control and water infrastructure were mis-adapted to foreign environments. These mis-adaptations live on to this day. The team is also raising awareness for the caste-based exploitation of “manual scavengers” (those who remove untreated human waste from latrines and containers) when it comes to maintaining sanitary infrastructure.

Finally, a new and ongoing project at UCD – Typhoid, Cockles, and Terrorism – is exploring the diverse and often unintended impacts of sanitary reform on typhoid incidence in revolutionary Dublin, the role of shellfish in spreading the disease, and bioterrorism allegations against Sinn Fein in 1920, for considering weaponising typhoid.

Dr Kirchhelle and colleagues have had major impacts across education, culture, policy and health. They have engaged with audiences from a wide range of age groups and socio-economic backgrounds through high-impact academic publications, multi-award-winning outreach activities (exhibitions, animations and games), and media features.

Between 2018 and 2021, the team organised a major typhoid workshop and published their results in Clinical Infectious Diseases. Their special supplement, Making a Difference?, was picked up by 91 news outlets and the World Economic Forum. An accompanying article in The Conversation article attracted 50,000 readers.

Dr Kirchhelle also appeared on BBC2 to comment on the new Typhoid Conjugate Vaccine, as well as the Surprisingly Brilliant Podcast (the second most popular factual podcast in the US) to discuss various aspects of the disease. The team’s vaccines expertise was also called on by the global media during the pandemic (including by Al Jazeera, BBC, Netflix and Vox). For example, Dr Kirchhelle appeared in the three-part Coronavirus – Race for a Vaccine series by Netflix and Vox, which also featured Bill Gates, and was an adviser on a Vox.com documentary, The risky way to speed up a coronavirus vaccine.

Starting in January 2020, the team put together an exhibition, Alice in Typhoidland, across three sites in Oxford (Bodleian Libraries, the History of Science Museum, and the Museum of Oxford). Alice in Typhoidland uses the biography of Alice Liddell (Alice in Wonderland) to engage visitors about the history and significance of WASH, vaccines, and antimicrobials for typhoid control. Most importantly, it challenges the myth that typhoid is a disease of the past and highlights the need for collective global action.

The exhibition’s popularity exceeded expectations. Between January and pandemic closure of March 2020, 89% of the History of Science Museum’s 42,500 visitors attended Typhoidland, and it was seen by a majority of the 139,766 visitors of the Bodleian Library’s Blackwell Hall. Typhoidland was featured on BBC World Service and BBC Radio 4. It was described as “must-see” by New Scientist and “audacious” by DailyInfo. Typhoidland was accompanied by successful school and family activity days and is now a permanent exhibition at the History of Science Museum (which sees 159,000 annual visitors) and the Museum of Oxford.

It’s a really important topic because these things don’t just go away and disappear, I think first world society forgets about major disease like this and it’s important that we’re reminded that it’s always been here.

Digital exhibitions enabled Typhoidland to stay open to global audiences despite lockdowns, attracting an additional 15,000 website views from 9,000 visitors across 72 countries. Over 21,000 people watched the associated animations on Alice Liddell’s journey through Typhoidland, the evolution of Oxford’s sanitary infrastructure, and the tragic fate of Irish cook Mary Mallon (‘Typhoid Mary’).

Drs Kirchhelle and Vanderslott are proud of winning critical acclaim. Their animations won the Bristol Science Film Festival Fact Film Prize, the 2021 Scinema People’s Choice Award, and were shortlisted for the UKRI/AHRC Research in Film Award as well as the WHO’s Health for All prize. Their interactive games on sanitation, sewage disposal, and typhoid detection won a 2020 Learning Technologies Awards gold medal and are freely available on the Typhoidland website. The exhibition’s digital concept was also awarded the British Society for the History of Science’s 2021 Ayrton Prize.

The judges were particularly impressed with how the whole interpretation experience was thought through with the game playing a key role in engaging with the challenges of improving sanitary conditions.

Another exhibition in the US, at the CDC Sencer Museum, will focus on sanitation, carrier control, and the 2021 US outbreak of extensively drug-resistant typhoid. It will launch in mid-2022 and is predicted to reach 30,000 visitors.

The team also recently secured AHRC-IRC funding to extend Typhoidland. At UCD, Dr Kirchhelle and postdoc Dr Emily Webster will analyse sanitation and bioterrorism in revolutionary Dublin, and will organise a multi-site exhibition at the Royal College of Physicians in Ireland and Dublin City Library.

Another leg of Typhoidland is under development at St John’s Medical College, India, and explores the (post-)colonial dynamics of typhoid control. This is set to run from August 2022 to January 2023, reaching an anticipated 20,000 people.

And in Nepal and Bangladesh, the team developed educational posters on typhoid, antibiotics, and vaccines with Patan Hospital (Kathmandu) and the Child Health Research Foundation (Dhaka).

Kirchhelle, C, The Forgotten Typers. The Rise and Fall of Weimar Bacteriophage-Typing (1921-1935), Notes & Records. The Royal Society Journal of the History of Science (2019).

Kirchhelle, C (corresponding); Vanderslott, S; Pollard, A, Typhoid: Past and Future, Clinical Infectious Diseases 69 [Supplement 5: Making a Difference? The past, present, and future of typhoid control’] (2019).