This domestic undergraduate marketing campaign (2013-2017) emphasised the prestige of the UCD brand by focusing on the quality of UCD’s globally recognised degrees. It prompted prospective students to imagine the endless possibilities that a degree from UCD would open up to them. The campaign message was expressed as a ‘world of learning, a world of opportunities’ using the specific tagline UCD: Welcome to the World.

An initial campaign video was created showing the gradual construction of a large (2m radius) globe that symbolised the world of learning at UCD. The globe consisted of 18 panels, each of which represented an undergraduate programme area and featured a story – about the expert lecturers, the learning environment, the student experiences and the resulting graduate opportunities. On an accompanying website, these stories were told in full and demonstrated through a 3D model visualisation of the globe. The globe itself was constructed by students and their actions and reactions were filmed in time-lapse style.

Subsequent campaigns built upon the success of this inaugural campaign inviting students and prospective students to engage digitally and physically with the globe and thus to become part of the world of UCD. 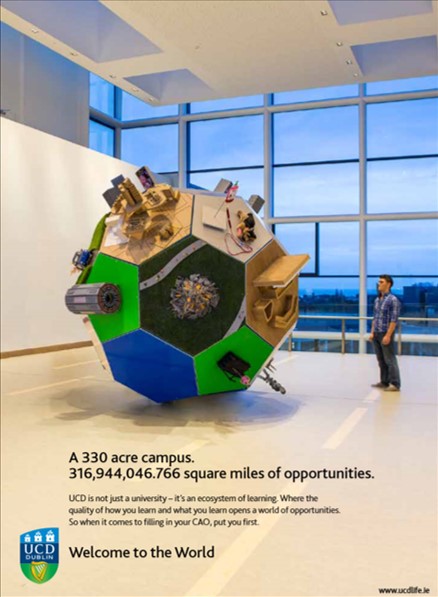