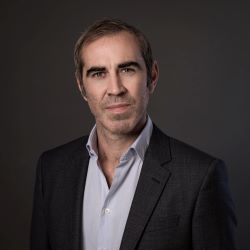 The international aspect of Dave Nangle’s BComm degree was a sign of things to come. After a 15-year career in investment banking in London and Moscow, he co-founded and now runs Vostok Emerging Finance, a venture fund that invests in fintech companies across emerging markets, including investments in Brazil, Mexico, Pakistan, Russia and across Africa.

I went to St Paul’s in Raheny for secondary school and then on to UCD studying BComm International with French. It was a great course. I loved the international/language aspect of it and the fact that it was a smaller class than straight BComm, with a chance to get closer with all. I spent a year in Marseille as part of the course and as much as I love Dublin and being Irish, getting a taste of the world via Erasmus was a game changer and triggered the decision that my career should not be in Dublin, or at least not start there.

After graduating, while many jumped straight into a master’s and others accounting, I just wanted to get out there and work; I had enough of the books and exams. The world of finance seemed to be where all the cool, clever kids were going and making lots of money – clearly that was attractive. Within that, some of my friends were becoming traders, financial structurers, basically deep math and numbers-based banking jobs, but I targeted the world of equities, because I felt it was more tangible and involved real companies combined with all the beauty of finance.

I had a couple of gap fills at AIB for a year and Merrill Lynch for about six months before that, before I landed a job in equity research at Barings Bank in London. I joined with a bunch of other graduates and classic banking, on day one, you are allotted out to various desks, which in a way sets your fate. Lucky enough, I was put on the emerging markets desk – and specifically the east European research team. I think being told to go on the emerging markets team was probably a defining moment that has shaped much of my subsequent career. I knew very little about emerging markets and equities at that stage but it became my world at Barings for the next five to six years.

I was focused on the financial services sector. It was a phenomenal proper start of my career, so much learning: economies, geography, history, industry and company focus, lots of travel and analysis of all that was important in the region with the goal of helping the bank and our clients understand the region and its companies better to deliver better investment results.

Everyone else on the EM team at Barings was from Russia, Turkey, Poland, etc so I felt like a bit of a fraud talking about emerging markets with no real life experience to back it up. I really wanted to go and live in a developing market and my girlfriend – now wife – and I had lots of healthy debates about the merits (and not) of this plan.

As I looked for opportunities, Russia came calling and I got a job as head of financial sector research at Renaissance Capital, an investment bank very much like the Davys or Goodbodys of Russia. At the time, everything was going well in London for my wife and me – we had good jobs and had just bought a house – but we took a chance and packed our bags and went to Moscow, which was the best life/work move we ever did. Russia was and is fascinating. It was 2006 and Russia was on the up, the markets were on fire, expats were streaming in.

Then the global financial crisis happened. Russia does highs and lows aggressively: you get super highs of a bull market where everybody’s drinking champagne on the roof of the Ritz and then the real lows of a bear market where everyone’s huddled in a bunker bar drinking US$1 pints. In hindsight, I really got a lot from the down cycle – I held onto my job as the company downsized and learnt so much more on the way down than on the way up.

I was nearly 10 years at Renaissance, between Moscow and London. We started to have kids and life became a little more real. Renaissance was a great place for always continuously reinventing itself and finding new interesting markets to tap – I’d done IPOs in Kazakhstan and Rwanda, looked at companies in Georgia, done private equity in Togo and covered banks in Nigeria. Towards the end though, I wanted ownership and something I could build and grow for the long term.

I also wanted to get into the world of investing. Working in an investment bank, I was seeing companies being built over time with great entrepreneurs and venture capital backing them. I knew I wanted into that world. I talked to a lot of people and in the end teamed up with Per Brilioth, who had set up Vostok New Ventures in Sweden many years before, which had a great reputation for emerging market venture investing. We agreed we should split the company in two and I would lead Vostok Emerging Finance, a venture fund that would invest in fintech in emerging markets.

Always easier said then done, it took a lot of time and energy to get off the ground and there was a lot of risk involved in the transition. It could have failed before it started, but we had a positive, high pressure, exciting, emotional six months and we’re here today, a very successful five years later.

What does your role involve?

I’m the chief executive of Vostok Emerging Finance. We invest in early stage private fintech companies across emerging markets – payment companies, credit companies, investment companies – anything in the financial services space that’s disruptive and innovative. We’re a team of six, spread across Dublin, London and Stockholm. We have investors from all over the world and the company is listed on the Stockholm stock exchange.

I spend the majority of my time with our current portfolio companies and running around the world looking for new investment opportunities. We’re very active investors and do everything we can to help our companies succeed. Besides that I spend a lot of time with our current and potential investors as without capital the machine stops working. I travel a lot and to many funky places.

We have 11 investments in the portfolio today. 2019 was a big year for us as we had two portfolio exits – a digital bank in Russia and a payments company in Turkey.  We made six times our money with the Russian company and three times our money in Turkey. So it’s working, we’re backing winners and making decent returns for our investors.

From a business point of view I like to win and achieve. Individually, at this stage of life I like to create and build as opposed to simple transact and earn.

What does success mean to you?

I read a book on this a while ago as I was trying to define what I wanted to do in the next part of my career. I discovered I was looking for freedom, flow and meaning. I think I’ve got all aspects of that now: the freedom of ownership and doing what I want; the flow, where I’m energised by what I do; and it all has meaning, at least for me.

What is your leadership style?

I think I’m inclusive, very personal and quite direct. I’m also delivery orientated, both for myself and for people who work with me.

What is your biggest achievement?

It has to be co-creating Vostok EF, because it didn’t exist five years ago and we’ve gone from the idea to having an initial cash vehicle of US$90m with a mandate, to today being a company that’s worth around US$250m.

What’s the best big of advice you’ve ever received?

How important is on-going learning?

I think it’s essential no matter what you’re doing, I like general learning beyond our focus – going to conferences, reading and meeting people and learning about their space. It just opens your mind.

What are your plans going forward?

Of course I want to grow this company and see how far it can go. But I would also like a career twists – I love seeing people who have had two or three careers that are almost totally different to each other. People like Paul Newman, who was an actor and a race car driver and then developed sauces.

At some point I’d love to not travel anywhere for three years and have a very simple, local life and simple business that I nurture.

How has your degree benefitted your career and/or personal life?

It opened me up to the world as a place to live, work and play.

What is your fondest memory from your time in UCD Quinn School?

Erasmus year abroad in Marseille is a standout year in life, never mind university. I also met my wife in UCD!

What are your main interests outside work?

Travel, my kids and a variety of sports, which I play to an average level but still with illusions of grandeur.

What piece of technology can you not live without?

Still shamefully my iPhone, which is every piece of consumer tech in one.

What are your pet hates?

I have way too many to mention but it starts with my patience intolerance disorder.

Who are your favourite writers or books?

I recently found audio books and I love being read to – most best recent readings/listenings are a bit dark/deep, like Man’s Search For Meaning by Viktor Frankl and The Painted Bird by Jerzy Kosinski.

Continues to evolve – today I would say Underworld, Arcade Fire and Bowie.

What’s the last gig/play/film/exhibition you went to that you loved?

Gig: Arcade Fire in 3 Arena. Film: Maradona documentary. Art is generally beyond me.

South Africa is just the best. Why? Go there and open your eyes.

Dublin always, but many Dublins – Pearse Street, Donaghmede, Raheny and now Rathgar. I love town and the coast and the mountains.

What charities or causes are closest to your heart?

Anything to do with education – it is the building block for all.