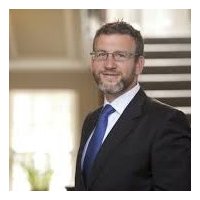 Having given up his career as a criminal defence lawyer five years ago to co-found and lead community development not-for-profit Solas Project, Graham Jones (BBL 99) is looking ahead to another life-changing move in September, when he will begin full-time study at the Church of Ireland Theological Institute.

After attending High School in Rathgar, I went on to do business and legal studies in UCD and graduated in 1999. From there I managed to secure an apprenticeship with McCann FitzGerald. I qualified as a solicitor in 2003 and worked in the firm’s private client department for another two years. While it was a great culture in McCann FitzGerald it wasn’t a fit for me: I wanted to be in a smaller environment where I could exercise my own leadership. So, in 2005 I joined a smaller, family-run practice where I was more involved in conveyancing. By the time I finished my time as a solicitor in 2011 I was working as a criminal defence lawyer.

What were the main influences that led to you changing your career so dramatically five years ago?
Throughout those early parts of my career I was doing a lot of voluntary work and that led to me and a couple of friends establishing a rugby club in Dublin 8, called Liberty Saints RFC. It was really a vehicle to engage with young men who were quite disenfranchised but had a lot of potential. Sport is a great way in which we can learn without realising we’re learning and rugby in particular lends itself to gaining life skills.

Setting up the club was a good way for me to demonstrate my desire to try to be an assistance to people who have a huge amount of potential but need a bit of structure in their life.

The other influence was seeing the criminal justice law system from the inside as a solicitor. My eyes were very much opened in terms of what was needed in regards to the care of young people who’ve got themselves caught in that system.

Those influences came to a head at Christmas 2010. I’m fortunate: I have a wife who’s very brave and courageous and she knew my heart. She sat me down and said we know what gives you greatest satisfaction and fulfilment, I’m happy for you to go and pursue that. So, at the start of 2011, I stepped away from law and moved into the community, not-for-profit sector and the Solas Project was born.

Can you tell us a bit about the Solas Project?

The stated vision of the Solas Project is to see an Ireland where all children and young people know their self-worth and can take advantage of their full potential.

To help bring this about, we currently run five programmes designed to equip and empower children and young people to live full lives and become positive participants in society.

In developing the programmes, in each case we have asked questions about what the problem is and what’s needed before coming up with our attempt to be part of a solution to this issue. I think quite often there’s a very middle class approach to trying to develop community programmes when really to do it properly, you’ve got to empower people – part of that is asking what they want, as opposed to saying, here’s something I can give you.

The final one is a community-wide initiative where we support schools in bringing in three opportunities: Solas Business, Solas College and Solas Sport. Each of those has their own individual aim but together they are supporting kids in transitioning from primary school to secondary school.

Funding comes from Government, trust funds and corporate donations, as well as through pure fundraising. It means we have to constantly be fresh and innovative and justifying what we’re doing, and that’s good because we’re spending other people’s money.

We have 13 staff and six or seven long-term interns. And, on any given week we have around 70 hands-on volunteers. In addition, a further 200 to 250 people are involved across the course of each academic year through our corporate volunteering programme.

Apart from volunteering or providing financial assistance, how can people help?

What’s quite often really needed in the areas we work in is genuine employment for people. It’s not just about the money people receive in the form of a salary, it’s more about the self-worth people get from working and being able to provide for others. I would love that we could play a part in encouraging other people to really consider how they might use their business acumen and skills to bring employment into areas where we’ve had three generations of unemployment. That’s something that is always very close to my own ambition and it’s something I would love other people to be part of.

And there’s a general need for people to be more aware of the issues that go on in our society. I am often struck by the fact that when people are more aware of those issues they have a greater willingness to try to be a part of the solutions. We’re all striving for a better and more equal society, but for that to happen, everyone has to take their own place in terms of being part of it.

What is your philosophy in business and in life?

It definitely has to be to treat others as you want to be treated yourself. That’s something I always would have held in regards to my professional career as a solicitor and it transferred over to Solas Project. That’s been very consistent in regards to my philosophy.

What is your leadership style?

It would be to equip and empower others around me to be better than I am at what we need to get done, if that is not too clichéd! I know I’m at my best when I’m working as part of a team rather than being a dictator or just getting tasks done. For me, it needs to be an environment in which I feel there’s a creative process and people feel free to input into that. That’s all about trying to empower and encourage others to grow into their potential.

What are your tips or advice for success?

Who or what are your influences?

I have a very strong faith as a Christian. That’s something that has shaped my thinking and my philosophy and how I treat people.

My mother had a massive influence – and my parents generally. When I look around and see where society’s breaking down and the great need for people to be investing in young people, I really value what my parents did for me and that has spurred me on to do something more.

There are also a couple of individuals I met along the way, especially in rugby circles, who really taught me a few things about hard work and discipline. The sport of rugby generally did that too.

What are your interests outside of work?

Spending time with my family is really important to me. That’s where I get my energy. And I’m very actively involved in my own church, which is St Catherine’s on Thomas Street, and parish life there. And rugby’s definitely important, and sport generally.

Finally, what are your plans for the future?

I have been selected to go forward for ordination within the Church of Ireland. This is a huge decision for me and my family, one that we are both nervous and excited about. It will require me to study for two years and then do a year placement. The next part, only God knows!