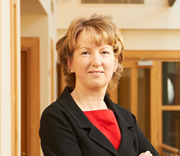 Honoured recently by the Women’s Executive Network as one of Ireland’s top 25 most powerful women, Siobhan Talbot (BComm 84, DipPrAcc 85) was introduced on the evening of the awards as “an inspiring first lady in agribusiness”.

It seems a fairly accurate account of the Glanbia group finance director, who oozes positivity and good humour and speaks matter-of-factly about continuing to work through her treatment last year for cancer.

Talbot, or Hickey as she was then, was brought up in south Kilkenny and went to secondary school in Carrick-on-Suir before moving to Dublin in 1981 to study commerce at UCD. She originally planned to become a teacher, but found herself increasingly attracted to accountancy during the BComm. She opted for a postgraduate diploma in accounting a secured a placement with PricewaterhouseCoopers (PwC).

“PwC was a tough but fantastic schooling because they introduce a very strong work ethic from your early days,” she says. “Forty of us joined that year and it was seen as almost unique because 50pc were girls.

“I think the accountancy firms are fantastic because there are a lot of young folk there and you’re all starting around the same time. There’s a great sense of camaraderie and a very good mix of hard work, good training and a bit of fun at the same time.”

Having met Billy Talbot in her Leaving Cert year, they married in 1987 and moved to Sydney for two years, where Talbot continued to work with PwC. “There was a fairly significant recession going on here then but we were positive emigrants. My husband is a Garda and he was able to take a career break. We were delighted with the opportunity and had a fantastic time.”

When they returned to Dublin, Talbot stayed with PwC for another couple of years before joining what was then Waterford Foods to set up an internal audit function.

“From a personal point of view we ultimately had an aim that we’d come back down south. It happened quicker than we had envisaged. We were lucky that way.”

Talbot has a strong farming background so the move was more than a physical return to her roots. “My father had been a farmer and my mother was delighted. It was a sector that even when it might not have had the popularity that it has today, I knew well and I always regarded very highly.”

But it was probably a bit of a culture shock, she says. “The dairy industry definitely wasn’t renowned for females at the time. And internal audit of itself was a whole new concept. Again, I was very lucky. Along the way, I’ve worked with really good people.”

She was financial controller of Waterford Foods in 1997 when the company merged with Avonmore Foods to form Avonmore Wateford Group (AWG). Going through the merger was “a huge learning curve, but a fantastic experience”.

The group was renamed and rebranded as Glanbia in 1999. She was group secretary in the merged entity before being appointed deputy finance director in 2005 and then being made group finance director and becoming the only woman on the board in July 2009.

“I can’t actually believe that I’ve been in the group 20 years at this stage. It feels like I’ve been in about three organisations. That’s why I’ve absolutely loved my time with Glanbia. The last thing it has been is staid.

“I’ve worked for a series of different chief executives. All of them have been great in their various ways. The organisation is now so different to the organisation that I joined or even the organisation that was created in 1997. Things like the merger and the various divestment and acquisition programmes that we’ve done since then have just been incredible learning experiences – busy, as they would be, but hugely dynamic and challenging and I’ve always enjoyed it.”

The group currently employs over 4,000 people, with manufacturing and processing facilities in seven countries and sales and technical support locations in 14 countries.It has four key business segments: US Cheese & Global Nutritionals, Dairy Ireland, Joint Ventures & Associates and Other Business.

The agri-food sector has stood out over the last few years as one of Ireland’s few success stories during the recession and Glanbia has been very much a part of this. In 2011, the group had a turnover of €3.2bn, a 23.7pc over the previous year. According to Talbot, 65pc of the group’s earnings are dollar denominated and side of the business is growing all the time.

One of the biggest challenges for the group at the moment, she says, is the domestic Irish retail scene. “Of all our businesses, our consumer products business in Ireland is probably the one that has been most challenged in the recent past. In recent months, it has stabilised, but there’s little doubt that the whole retail dynamic in Ireland has altered dramatically.

“Fundamentally at our core is our large scale dairy businesses on which we’ve built nutritional platforms. I think the positive thing for Ireland is we do obviously have a very significant opportunity coming when Europe eliminates milk quotas in 2015, so that’s something we’re very actively planning for at the moment. In general, the scale would be very much tipped for us towards the positive which is fantastic at the moment.”

Receiving the WXN award in June was a big surprise, says Talbot. “But it was a really nice surprise. I hadn’t expected the recognition in any sense but it was very pleasant.”

Asked how she feels about being described as an inspiring first lady of agri-business, she says: “What can I say except that it’s a fairly laudable description? I wouldn’t let it go to my head or anything!”

Talbot says the biggest influence in her life has been her mother. “She is a national school teacher and a very bright lady. She had five of us and has had various challenges in her life, including my father dying when we were all young and she was only 41 herself. I had a 21-year-old brother, who unfortunately we lost to a car accident.

“But she’s a woman who has dealt with adversity very well. She just does not let it get to her. She kept on working through the years. In being inspirational in the simplest things in life and encouraging you to get on with it and keep going, she has been great.”

Talbot also stresses the importance of the support she receives. “I have two teenage kids and inevitably being the working mother you’re ravaged with guilt at various times when they’re growing up, but I’ve always been lucky in terms of having a good infrastructure at home. My husband is really good and supportive.”

She’s able to put a positive spin on her health scare two years ago. “It was one of those things where you can be bizarrely unlucky and lucky at the same time. I approached it in feeling very lucky that it was caught so early. I kept working through the treatment. That just worked for me. I think everybody has to approach these things in a way that works for them.

“The support that colleagues and home and husband and siblings and friends gave was just second to none. And, as I’ve said to others, the HSE gets a lot of grief, but my experience of them, once you get into the system, they’re absolutely superb.”

She believes she’s been fortunate to have always really loved what she does. “I would miss it,” she admits. “Even speaking to my own now – Thomas has just done the Leaving and Alice is going into fifth-year – I say to them, whatever it is that they choose, they must keep going until they get something they like.

“Sometimes that can take a bit of time. Sometimes you might have to do things for a period of time as you get all those experiences gathered. But I would say to approach every opportunity with positivity, don’t burn bridges as you go along, find something you enjoy and it will carry you an awfully long way.”