Scientists studying a 10-million-year-old snake have, for the first time, revealed the hidden colours of a fossilised animal by analysing its cell structure.

The discovery means researchers who want to determine the hidden, real colours of fossilised animals may no longer be limited to analysing rare cases where the original pigments have survived.

The researchers found that the snake’s skin colour could be identified by studying the structures of different cell shapes that are unique to individual pigments.

Although the pigment in the snake’s cells had long disappeared, the investigators realised that the cell shapes of the fossilised snakeskin were similar to certain pigment cells in modern snakes that produce colour. 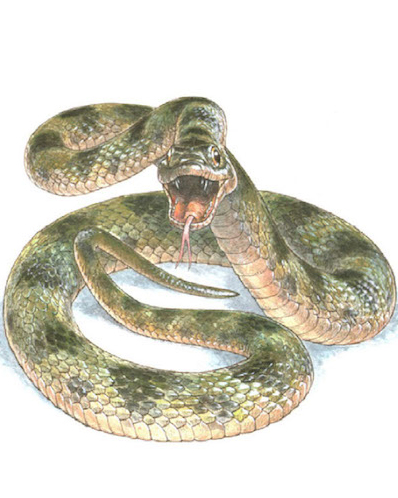 Using the cell structure data of modern snakes as a guide, the scientists matched the ancient and modern snake cell information. The comparisons allowed them to determine the colour of the ancient snake.

Right: An artist’s representation of the snake, classified in the Colubridae family, as it might have appeared in life. Credit: Jim Robbins

Because the snake’s skin was fossilised in calcium phosphate, the researchers were able to identify the animal’s colour from decayed pigment cells using a scanning electron microscope. The mineral calcium phosphate is unique in its ability to preserve fossilised tissue in fine detail.

The preservation of the tissue in the mineral meant the researchers could determine the colour of the snake’s skin despite the fact that neither the colours nor the pigment bodies are visible anymore.

Dr Patrick Orr, Senior Lecturer, UCD School of Earth Sciences, and colleagues from the UK and Spain also carried out the research. Dr McNamara originally completed her PhD at UCD under the supervision of Dr Orr.

The only pigment that has been known to survive fossilisation in animals is melanin.

Up to now, scientists could only identify browns, blacks and muddy reds in ancient animals, such as feathered dinosaurs and early mammals, if melanin was present in fossils.

In this case, the fossilised snakeskin retained the unique structures of different types of pigment cells. The shapes meant the investigators were able to determine that the snakeskin was originally a mix of yellow, green, black and brown.

Dr McNamara first studied the fossilised snake while conducting her PhD research on fossils from the Libros site in Spain, but analysed it further recently.

“Maria realised that the structures that we saw within the skin corresponded to pigment bodies and weren’t randomly distributed,” added Dr Orr

“We quickly recognised that because the skin was so well preserved [in this fossil] the pigment bodies were in their original position – they were retaining their original spatial distribution with each other,” said Dr Orr.

“This means that effectively we had a snapshot of what that snake’s skin looked like in life and then Maria was able to use modern analogues to look at how the distribution of the types of pigment body matches with colour.”

Funding for the research was provided by an Enterprise Ireland Basic Research Grant, an IRCSET-Marie Curie International Mobility Fellowship, and a Marie Curie Career Integration Grant.

The study entitled ‘Reconstructing carotenoid-based and structural coloration in fossil skin’ was published in the journal Current Biology.