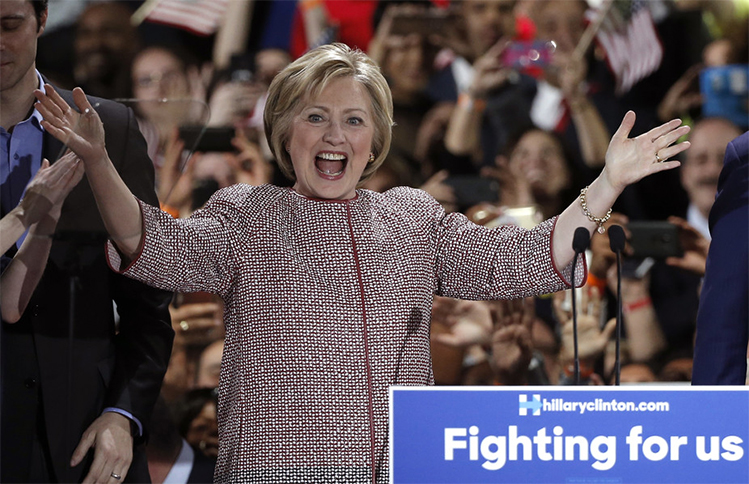 Hillary Clinton has been deeply frustrated in her efforts to dismiss Bernie Sanders' candidacy. Reuters/Mike Segar

A fractious New York primary has given Hillary Clinton and Donald Trump the clear victories they badly needed to end any perception that the wheels may be coming off their campaigns. Trump’s win will give him a desperately needed momentum injection – but with more than 57% of the vote, Clinton’s victory is at least as crucial to her chances, and it’ll do a lot to extinguish the insurgent hopes of her opponent, Bernie Sanders.

With no clear path to the nomination left, is Sanders’s campaign effectively over? And what legacy will it have?

There is no doubt he’s pulled Clinton leftward when she would have preferred to pivot to the centre for the general election. Doubtless she will now begin to do that – but the sheer gravitational pull of Sanders’s insurgency will still throw off the trajectory of her national campaign.

And after all, she led Sanders by more than 40 points in New York polling until the autumn of 2015. That a victory by a margin of more than 15% in New York is considered a big win for Clinton reflects just how high Sanders had raised the stakes, winning seven of the eight contests in the weeks before New York voted.

Even though Sanders has done essentially nothing to catch up to Clinton in terms of pledged delegates, which he must do to win the nomination, Clinton has been deeply frustrated in her efforts to dismiss his candidacy, not least since his success has thrown some of her own flaws into sharp relief.

This, then, could have been a big moment for Sanders. He put up a strong fight in New York state, staging mega-rallies in three of New York City’s five boroughs and spending twice as much on television advertising as the Clinton campaign did.

But even with a full two weeks to campaign since the last major primary, he failed to cut into Clinton’s lead as he had in several states in recent weeks, and that points to some serious shortcomings in his campaign generally – and his New York campaign particularly.

As he has done nationally, in New York, Sanders generally failed to compete with Clinton among voters of colour, and most notably with black voters, whom exit polls showed him losing by more than 40 points. Hailing from the overwhelmingly white state of Vermont, he has no track record building an electoral coalition from different groups, and he has relied heavily on highly mobilised, relatively highly educated white voters.

He is also very dependent on voters registered as independents rather than as Democrats, who could not vote in the New York’s primary because of the state’s rules.

To make matters worse, Sanders bungled his New York efforts with some serious gaffes. He had to row back from his claim Clinton was “unqualified” to lead. Asked by the New York Daily News editorial board about his core platform of breaking up banks and prosecuting Wall Street malpractice, he failed to demonstrate any real understanding of how it could be done. To top it off, he made a two-day visit to the Vatican that seemed to stem principally from a miscommunication.

At the same time, Clinton played up her local advantages. Her strong ties to the state was a stronger sell than Sanders’s references to growing up in Brooklyn, and her merciless focus on Sanders’s stance on gun control along with her ability to turn out local progressive speakers to back her all gave Sanders little breathing room to expand his vote. Mixing it up on the New York debate stage. EPA/Justin Lane

For some months now, Clinton’s consistent argument has been that Sanders is a progressive master of rhetoric, but that she is a “progressive who likes to get things done”. She has acknowledged he has taken the high ground in energising voters, especially the young, but has bet on a pragmatist argument that will not only overcome her Democrat opponent but play well in the general election.

Clinton’s “slow and steady push” is hardly inspiring (and certainly not as emotive or captivatingly simple as Sanders’s call for a “political revolution”) but shows she is playing the long game, already positioning herself as the centrist candidate for the election in November.

But she hasn’t been able to start that process as quickly as she’d hoped. Clinton has had to move leftward to acknowledge the pull of the Democratic base, and that’s forced her into some interesting and sometimes awkward manoeuvres – some of which have meant explicitly distancing herself from policies implemented by the first Clinton administration.

But the platform of her campaign isn’t the only issue here. In its way, this campaign has become a struggle for the soul of the Democratic Party. While it may not be as dramatic as the current struggle for whatever remains of the Republican Party, it could yet be a seismic shift that sets in motion a slow revolution.

And that rather depends on what Sanders does next.

All the indications are that Sanders will see out the primaries to their bitter end in June. If he does, he’ll have to work hard to justifying staying in the race when Clinton’s lead in delegates seems insurmountable.

Even before New York was lost, all the remaining technically possible scenarios for a Sanders nomination seemed highly unlikely at best. Now his campaign has been dealt an even bigger blow, some awkward questions present themselves. Will Sanders endorse Clinton? Yes, but the more significant question is: will he actively and wholeheartedly campaign for her? That is currently unclear. Some Democrats are already fretting that he’ll become this year’s Ralph Nader, the 2000 Green Party candidate who siphoned off votes from Al Gore.

They also worry that his attacks on Clinton, which have turned deeply caustic of late, may do lasting harm to Clinton and other candidates besides – as Clinton’s campaign manager put it, “poisoning the well for Democratic candidates up and down the ticket”.

At their convention in July, the Democrats will want to look united. What price will Sanders demand for that? At the very least, he will want a speaking slot at the convention. It is also likely he will want a say on the platform and maybe even commitments regarding presidential appointees. Not only is Sanders likely to influence Clinton’s campaign; he might even influence the makeup of the next administration.

Might a lasting political movement emerge from the momentum of Sanders campaign? This seems unlikely. His campaign has been a factional, insurgent one, like those of Jerry Brown and Howard Dean before him. His support among white liberals and the young is phenomenal, but it does not imply that some new left-wing bloc has arrived to transform American politics.

And as New York has now proved, it’s simply not enough to ultimately overcome the coalition of moderates and people of colour that will secure the nomination for Clinton, and which will in turn give her a very strong shot at the presidency.

But Sanders’s efforts throughout the campaign have nonetheless been remarkable. With New York done and dusted, Clinton has a much-needed victory under her belt – but she may be feeling the Bern for some time yet.