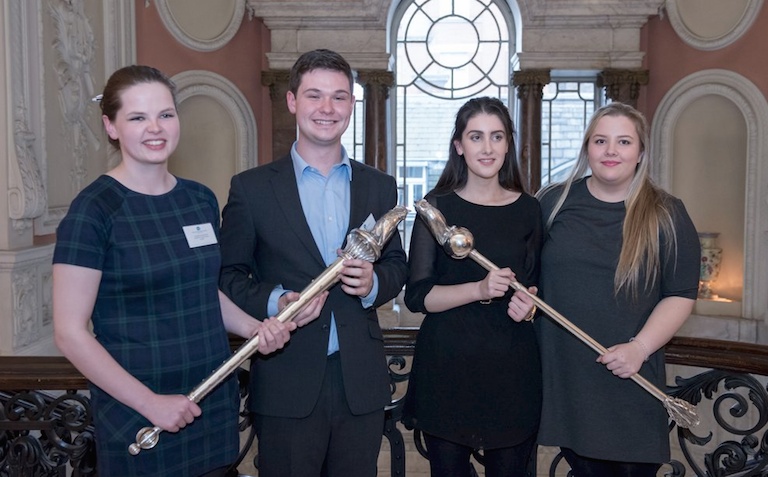 UCD law and philosophy students Clíodhna Ní Chéileachair and Aodhán Peelo have won the John Smith Memorial Mace debating competition in London. The competition is the main event for third-level debating teams in the UK and Ireland.

Ní Chéileachair and Peelo defeated University of Cambridge, Glasgow University and University of Swansea, arguing in favour of the motion “This house believes that anti-racist activism ought also to be anti-capitalist.”

What a week for UCD. L&H Clíodhna Ní Chéileachair and LawSoc auditor Aodhán Peelo have won the International Mace. pic.twitter.com/Q5UtuwNrs1

The John Smith Memorial Mace began as The Observer Mace in 1954. It was renamed in 1995 to honour the former winner and late Labour Party leader. The competition is open to teams from universities in England, Ireland, Scotland and Wales.

“Clíodhna’s strategy game was fierce, putting Ireland in a position where they could convincingly sweep up the benefits of market regulations that England had said were good, while also being able to go further and win on activist efforts that require pointing out circumstances where the market fails people,” said panel judge Roberto Sarrionandia.

“Our law classes obviously help with some techniques, but debating is an art form in and of itself,” said Ní Chéileachair. “We have weekly training in UCD from some of the world’s best coaches, and get amazing support from the university and the Societies’ Officer when it comes to attending competitions and getting the practice we need to excel.”

“It’s been a whirlwind. Even to have the chance to represent the university and the country abroad is such a privilege,” said Peelo. “To bring the trophy home to UCD is a dream come true.”

The two winners have reached the final of debating competitions before. Ní Chéileachair beat 300 other students to win the individual award at the Irish Times National Debating Championship in February.

Peelo represented UCD Law Society with Paul O’Dwyer in the final of the European Universities Debating Championship in 2015.