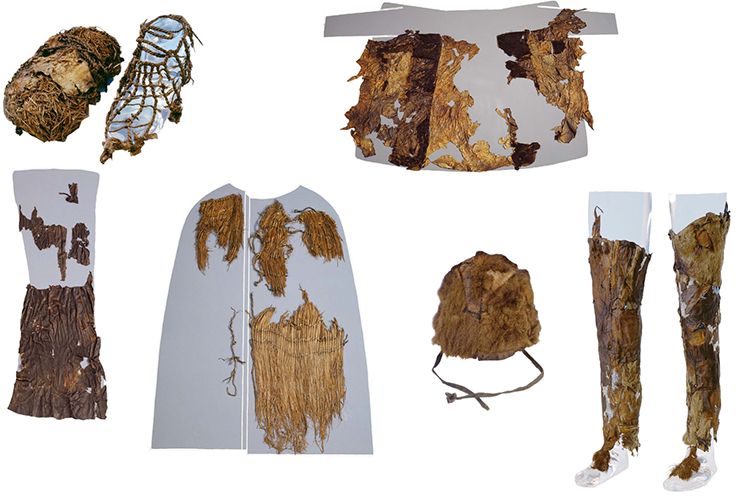 A 5,300-year-old mummy found in the Alps was wearing clothes made from at least five different ancient species of animal when he died, according to genetic DNA analyses carried out by a University College Dublin scientist.

The study, published in the journal Scientific Reports, suggests that Copper Age populations chose different types of animals hides, from both domestic and wild animals, for specific purposes.

The findings of the new research also indicate that the mummy, known as the Tyrolean Iceman, may have been a hunter as well as afarmer. It had previously been thought that the Iceman was just an agropastoralist – a person who survived on a mix of livestock and agriculture.

Pictured top: From clockwise left, a shoe with grass interior (left) and leather exterior (right), sheepskin coat, leggings made from goat hide, a hat made from bear fur, a grass coat and a leather loincloth; and, below right, a leather quiver made from roe deer (Pics courtesy of Institute for Mummies and the Iceman) 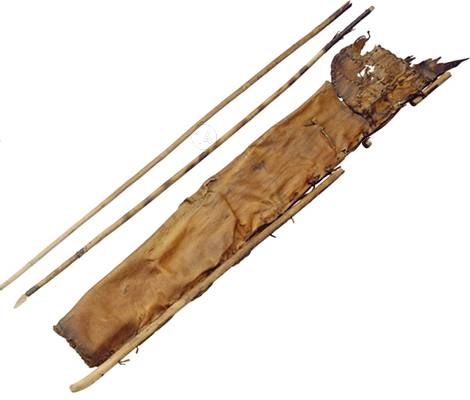 An international team of scientists led by Niall O’Sullivan, PhD candidate at the UCD School of Archaeology and the UCD Earth Institute, and the Institute for Mummies and the Iceman, EURAC research, Italy, carried out the research.

The Tyrolean Iceman — a 5,300-year-old mummy, nicknamed Ötzi — was discovered in 1991 in an area of Ötztal Alps that straddles the Italian/Austrian border.

Two decades of analysis have provided insights into his ancestry, diet, tools, lifestyle, health and attire.

Until now several studies were unable to clearly identify the species of origin for the majority of the iceman’s clothes. Conclusive research on the Iceman’s leather was prevented by the relatively advanced decomposition of the material.

By sequencing the mitochondrial genomes – DNA that is transmitted exclusively through the female line – of nine fragments of leather from the Iceman’s clothes and quiver, the scientists identified the species of origin for each fragment.

The latest sequencing technologies were employed to target and magnify certain strands of DNA, and thereby identify the species of each piece of clothing.

The Iceman’s clothes were stitched from the hides of several animalshttps://t.co/CI7Y2nKqFI

The investigators found that the Iceman’s garments and quiver are made from a mixture of at least five different species of animal, including brown bear for his hat, and an archery quiver consisting of leather made from roe deer.

The study examined the iceman’s personal effects: shoelace, hat, loincloth, coat, leggings and quiver.
The majority of the samples taken from nine fragments of the iceman’s attire originate from domesticated cattle, sheep and goat species.

The mummy’s shoelaces are made from cow leather and his loincloth comprises sheep leather.
The analysis revealed that the coat alone was a combination of at least four hides and two species – sheep and goat. The investigators noted that the result may indicate a “haphazard” stitching together of clothing.

The leggings were composed of goat leather, which was also used in the manufacture of a 4,500-year-old leggings discovered previously in Scnidejoch, Switzerland.

This result lends support to the idea that Copper Age individuals selected species for specific attributes when making clothing.

“Given that there appears to be pattern to the Iceman's clothes assemblage, he was a resourceful individual using all that was available to him. The coat is primarily sheep. Goat was found in leggings of two ancient individuals from alpine Europe. This may have been for flexibility [of movement],” said Niall O’Sullivan.

The results also revealed that the hat and quiver came from wild species — brown bear and roe deer respectively.

While previous research has established the Iceman as an agro-pastoralist – a person who survived on a mix of livestock and agriculture – the researchers suggest that the hat and quiver provide evidence of hunting and trapping of wild animals.

The paper is entitled "A whole mitochondria analysis of the Tyrolean Iceman’s leather provides insights into the animal sources of Copper Age clothing".